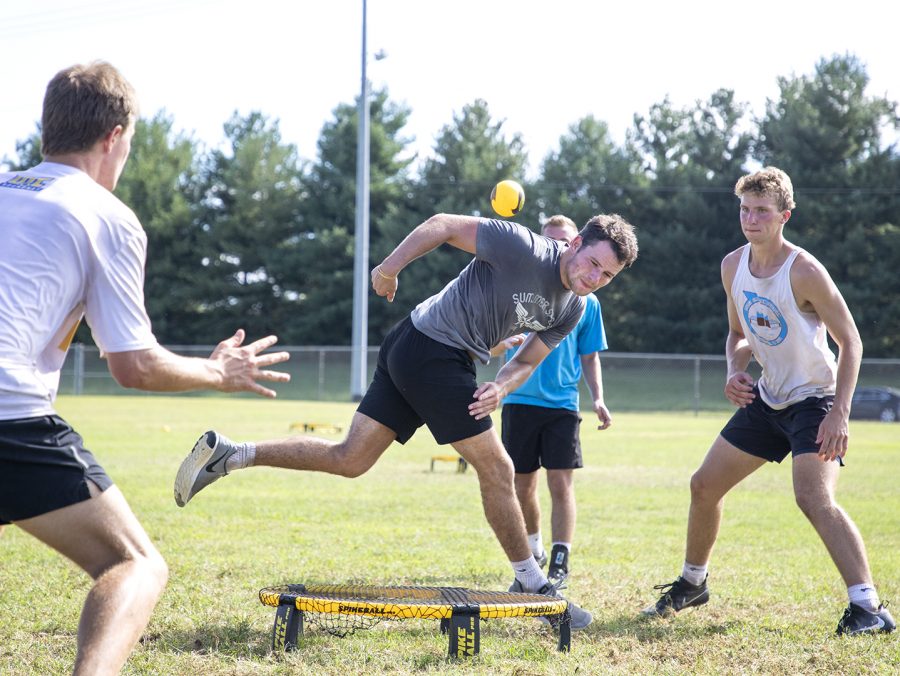 Austin Montgomery, 20, center, WKU, is playing in a individuals tournament with his teammate Austin Stacy, 20, back center, against UTC players Blake Davis, 20, left, and Coleman Epperson, 19, right, for the title of third place. Montgomery and Stacy end up losing and placing 4th.

The popularity of roundnet has soared in recent years, and if a group of passionate WKU students have their way, the sport’s footprint on college campuses will only continue to expand.

Roundnet involves two teams of two serving a ball onto a trampoline-like net and trying to stop their opponents from returning it within three hits. According to Forbes, the sport, which is based on an obscure outdoor playset from the 1980s, was pioneered by businessman Chris Ruder.

Spikeball, which Ruder founded in 2008, sells the equipment necessary to play roundnet. The brand’s name has become so synonymous with roundnet that the two terms are often used interchangeably, which has put Spikeball at risk of becoming a genericized trademark.

Jackson Stanek, a senior majoring in entrepreneurship, came to WKU in 2015 with an unopened Spikeball set in the trunk of his car. After Stanek convinced his friends to try it with him, the group was hooked. Stanek said his increasing interest in the game led him online, where he discovered that people played roundnet competitively.

“I happened to join a Facebook group for college Spikeball players,” Stanek said. “I had little to no intention of doing much with it, I was just curious. Then one day I saw that there was going to be a college tournament in Georgia. I told my roommates, and we decided to go.”

Austin Stacy, a junior majoring in biology and chemistry, traveled with Stanek to compete in the tournament. Stacy and Stanek went to the same high school in northern Kentucky, and Stacy said they bonded over roundnet once he came to WKU in 2016. The duo is also linked by their involvement in Young Life, a nondenominational Christian ministry.

Stacy and Stanek live with eight other Young Life leaders. Though a majority of the house’s inhabitants have competed in tournaments since the one in Athens, Georgia, Stanek has particularly fond memories of the group’s first tournament.

“We had no clue how good we were or how bad we were,” Stanek said. “We realized we weren’t as bad as we thought, but some teams there were beating us pretty bad. It was a really humbling experience that made us all want to get better.”

Stanek said since his initial foray into competition, he and a varying number of companions have traveled to about four tournaments each semester. By the spring of 2017, around eight competitors from WKU were regularly traveling to tournaments. Stanek said the growing number of people interested in the sport prompted him to establish Spikeball as a club sport at WKU.

“Spikeball has really been pushing every college group of guys to make their clubs official with their schools,” Stanek said.

Stanek said he had a meeting with a graduate student who said they couldn’t get any funding for at least one semester and had to first prove they could sustain the team. So, the group continued traveling to tournaments on their own.

Two senior coordinators came to watch a small tournament the team hosted last spring, and Stanek said they were impressed.

“They noticed how well organized we were, and after that they told us we’d be guaranteed to be an official club sport starting this semester,” he said.

Western Kentucky Roundnet has around 14 members that routinely compete in tournaments, as well as around 15 consistent members who only play for fun. The team also maintains a GroupMe with around 60 members so people can meet up and play together.

“People come up and ask us, ‘Hey, what is this?’ while we’re playing,” he said. “Questions like that are a great chance for us to introduce them to the sport and add them to our community. The first week of classes this semester we noticed a group of freshman guys playing Spikeball, and we got the chance to talk with them. Now, they are a part of our club.”

Stanek said that while WKU had hosted numerous intramural tournaments in the past, Bowling Green had never been the site of an official College Spikeball tournament. Stanek made it his mission to change that this semester.

School is back in session. You know what that means. It’s College Roundnet Season baby. Click the link in our bio to register for a tournament near you and make your school proud. Tag your SpikeCrew! #spikeball #jointhemovement

On Sept. 15, Western Kentucky Roundnet hosted the WKU College Tourney. Twenty-one teams of two players traveled to Hattie L. Preston Intramural Sports Complex to participate in the event, including squads from the University of Tennessee at Chattanooga and Asbury University. Around 10 spectators also gathered along the fence to cheer on their respective teams.

Nine Spikeball nets were spread out on an open field so that each match-up had plenty of room to maneuver. Each of the 21 teams were split into three groups of seven during pool play, which lead off the day’s festivities. Pool play decided the seeding for bracket play, which was the event’s second section. The last part of the tourney was the official college tournament portion.

David Gonzales, a graduate student from Valdosta, Georgia, was one of the 42 participants in the event. Gonzales, who attends the University of Tennessee at Chattanooga, said he and numerous roundnet players from his school came to WKU to encourage their friends.

“The roundnet club here is a bunch of cool guys, so we became friends,” Gonzales said. “As ambassadors and people who love the sport, we want to see it growing everywhere, even if it’s Bowling Green, Kentucky.”

According to the Spikeball website, there are now more than 4 million roundnet players across the globe. As the game’s profile continues to rise, Stanek said Western Kentucky Roundnet plans to continue playing and expanding the sport they love.

“This is a growing sport that is really easy for anyone to play,” Stanek said. “You can play non-competitively and have a bunch of fun, or play super competitively and still have a lot of fun. It’s for everyone.”