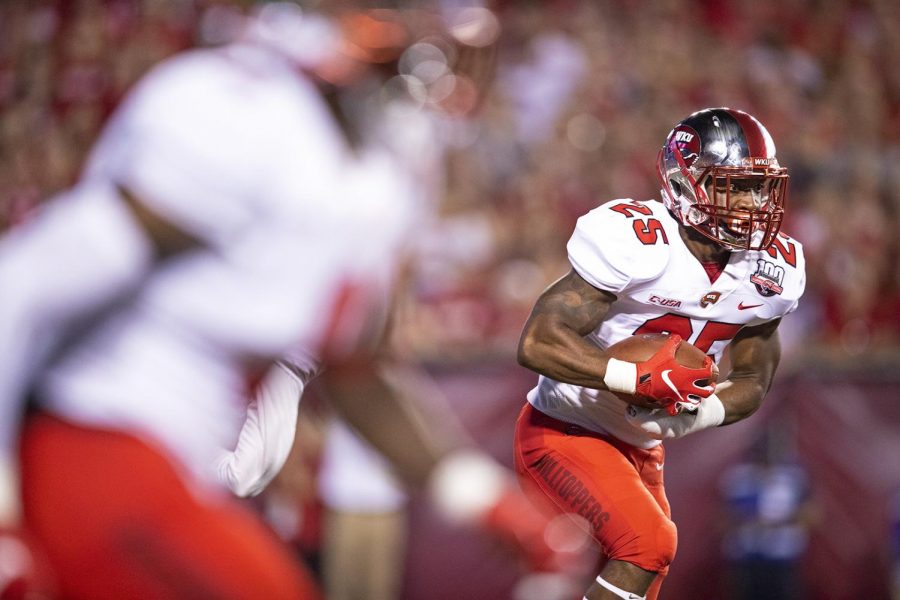 A stagnant WKU offense was unable to capitalize on opportunities from a defense that was up to the challenge in WKU’s 34-3 loss at Wisconsin Friday night.

The Hilltoppers’ red zone offense was largely silent. The Hilltoppers made four trips inside the 20-yard-line and only came away with a field goal. Two of the four red zone trips ended in in turnovers, one a fumble and one an interception.

Head Coach Mike Sanford spoke of the need to convert red zone opportunities after the game.

“That starts with me,” Sanford said. “It starts with me and continuing to make sure that we’re putting our players in the best position to be successful in those red zone opportunities.”

The WKU defense was up to the task, forcing Wisconsin’s first drive to stall out at the Hilltopper 41-yard-line.

On the following drive, redshirt senior quarterback Drew Eckels was sacked on third down at his own 5-yard-line to force a punt. Wisconsin sophomore running back Jonathan Taylor, running behind Wisconsin’s vaunted offensive line, juked his way to a 47-yard touchdown on the first play of the ensuing drive. It was his first touchdown of the season, and it gave Wisconsin a 7-0 lead.

WKU managed to put together an eight-play drive, but it was undone by a 15-yard chop block penalty from sophomore guard Jordan Meredith. The drive did show off senior quarterback Drew Eckels’ skill with his feet, as he managed to rush for 35 yards on the drive.

“He did a nice job,” Sanford said of Eckels. “We had a game plan, off game film, of trying to get some of our speed out in space, knowing that it was going to be challenging to run the ball in between the tackles, part of those had a read component to it.”

The Hilltoppers were finally able to get some defensive traction at the end of the first quarter, getting a huge defensive stop with the key play being a 9-yard sack by senior linebacker Masai Whyte. After the Badger punt, WKU got the ball at their own 33, but went three-and-out.

Wisconsin got into the red zone again later in the second, but the Hilltoppers were able to hold the Badgers to a field goal thanks to stellar pass defense in the end zone by sophomore safety Antwon Kincade and a sack by sophomore defensive tackle Jeremy Darvin.

But Jonathan Taylor gashed the Hilltopper defense a second time with 3:48 remaining in the second as he ran 30 yards to make it 17-0. He finished the game with 145 yards, two touchdowns and one fumble on 18 carries.

After the game, Whyte spoke of his feelings on the defense.

“I like where we stand,” Whyte said. “Our defense came together. We tried to play, just as a unit, and we knew we had to get the ball back as much as we can.”

The Hilltoppers’ offensive struggles continued throughout the quarter and Wisconsin got the ball on its own 25 with 1:56 remaining in the half. The Badgers drove down the field on an 11-play drive capped off by a 2-yard touchdown catch by Kendric Pryor to make it 24-0 at the half.

In the second half, the WKU offense appeared to be rolling, completing two quick passes. Eckels found sophomore receiver Jacquez Sloan for a 48-yard completion to get into the red zone. The drive petered out and the Hilltoppers had to settle for a Ryan Nuss field goal. It got the Hilltoppers on the board and made the score 24-3.

On the ensuing drive, Wisconsin added another field goal to its lead. WKU answered by driving to the Badger 10-yard-line before Quin Jernighan threw an interception on a trick play to end the possession.

The fourth quarter was much of the same for both teams, and the Hilltoppers fell 34-3.

WKU will continue the season at 8 p.m. on Saturday at Houchens-Smith Stadium against the University of Maine.