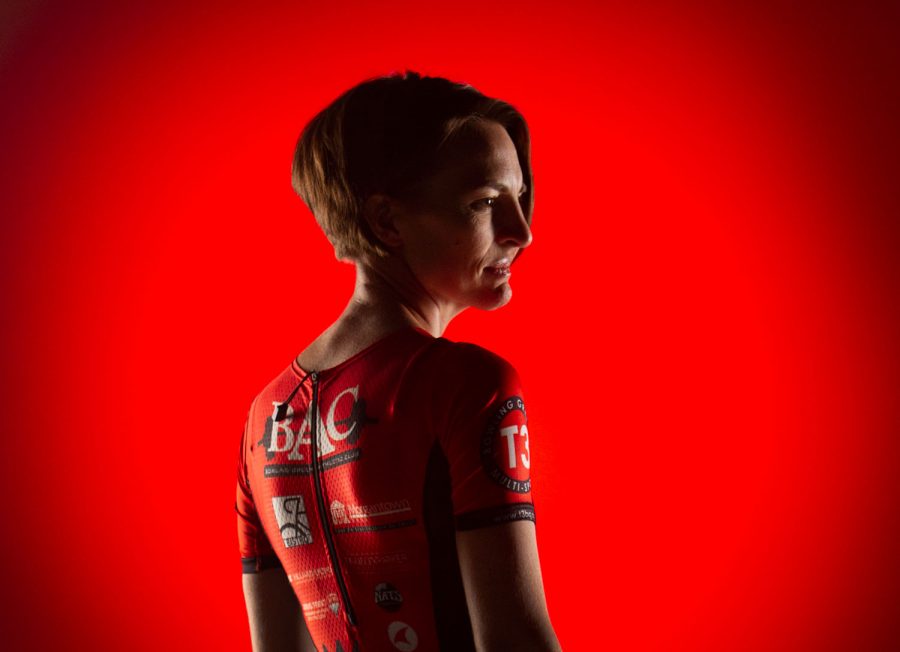 Melinda Grimsely-Smith, international scholarships coordinator and fellowship adviser at the Office of Scholar Development recently completed a Half-Ironman competition, consisting of a 1.2-mile swim followed immediately by a 56-mile bike ride and then a 13.1-mile run.

Grimsley-Smith’s approach to assisting students stems from her own personal beliefs in the importance of setting goals and seeing them through to the finish line– literally.

In her spare time, Grimsley-Smith pursues fitness in the form of running 5ks, 10ks and half-marathons, as well as participating in triathlons. She most recently completed a 70.3 mile half-Ironman Triathlon.

Growing up, the closest Grimsley-Smith got to exercise was marching in her high school and college marching bands as a piccolo player. She found running to be physically painful and unenjoyable. However, transitioning into her doctoral program led her to seek structure in the form of a training schedule.

Grimsley-Smith picked up the bad health habit of smoking when she was 18 years old. Years later, confronting failure and navigating challenges and opportunities throughout her Ph.D. program motivated Grimsley-Smith to manage her anxiety in a healthy way that benefited her body rather than damaged it. She didn’t just take up running; she took up running races.

Although it’s difficult to quit an addictive habit, Grimsley-Smith became determined to invest in her physical health by replacing smoking with running. She wanted to have a child soon and used that as motivation to become smoke-free and healthier by the time she got pregnant.

Having struggled with anxiety throughout her life, Grimsley-Smith found solace from her stress in exerting herself physically and extending her limitations day by day. She describes herself as “extremely goal-oriented” and finds fulfillment in accomplishing her goals. When her body feels tired or sore, she is pleased with her effort and allows her mind to calm, knowing that she has done something productive that results in the improvement of both her physical and mental health.

Grimsley-Smith’s job at WKU is oriented around helping students articulate their goals and figuring out how to accomplish them. Because she has firsthand experience working in increments towards something that feels impossible, Grimsley-Smith is better equipped to relate to students and help them realize that their wildest dreams and goals are attainable.

Recent WKU graduate and Fulbright Scholar Sarah Linder said that Grimsley-Smith helped her through every step of the Fulbright application process, from research, to writing, to the interview.

“She was so encouraging and helped me focus my interests and future goals,” Linder said, “I wouldn’t be sitting here in the UK now without her.”

The most recent challenge that Grimsley-Smith took on was the half-Ironman Triathlon in Chattanooga, Tennessee, that she completed in May. The components of the half-Ironman include swimming 1.2-miles, biking 56-miles and running 13.1-miles.

Grimsley-Smith trained six days per week for the race, rotating between running, swimming, and biking each day. She has done the majority of her training all on her own. She loves learning and extensively researched how to best prepare for a race of that caliber. She is involved in a local triathlon club, T3 Multi-Sport, which she has found to be a good resource for workouts and training advice.

Grimsley-Smith is also the mother of two daughters —a 9 year old and a 4 year old. She said that she worked to make sure that her training schedule never got in the way of her mom schedule. Her goal was to wake up and complete her training for the day by the time her girls woke up around 6 a.m.

Discipline has been a central theme in Grimsley-Smith’s life, and has been largely shaped by her pursuit of fitness. She has found that there is power in scheduling, and that prioritizing is key.

“Everything can be done, just not at the same time,” Grimsley-Smith said.

“All it takes is choosing your priority and getting started.”

For Grimsley-Smith, part of staying committed to her training is not allowing herself to say no or make excuses. She does little things like laying her training clothes out at night. That way, when she rises before the sun, she has one less excuse to postpone her training.

“It’s not about setting the world on fire every day,” Grimsley-Smith said, “it’s about practicing discipline and learning to be faithful to your goals by working towards them in small increments daily.”

Going into the half-Ironman Triathlon, Grimsley-Smith says she was not 100 percent confident she could do it, but nothing would keep her from trying. She had enough experience to know she could trust the process and trust her training plan. She describes herself as a “middle-of-the-pack” athlete, and the thought of exerting herself at a high level for six and a half hours straight was incredibly daunting. When she crossed the finish line, she said it seemed “magical” that she was able to complete it. But it wasn’t magic, it was the result of being diligent every day.

For those who want to pursue fitness and don’t know where to begin, Grimsley-Smith recommends finding a “tribe.” Trying new things is scary to Grimsley-Smith, and the running and triathlon community that she is a part of was not always comfortable to her. The people she met at races were not people she would typically surround herself with, but they all had one thing in common: they all had the goal of finishing the race.

Grimsley-Smith is currently training for the 200-mile Bourbon Chase overnight relay race across Kentucky’s Bourbon Trail held in October. She is also considering exploring trail ultramarathons, an adventure that she feels is “both exciting and scary.”

“I’ve done enough scary things to know that at the end, it’s not going to be scary anymore,” Grimsley-Smith said.

For Grimsley-Smith, it’s not about where she places in the race, but everything she has gained along the way. She is stronger, faster, and fitter than she has ever been.

“There is so much more to gain from my training for a race than winning, and those things are what will last me a lot longer than any trophy or prize,” Grimsley-Smith said.

Grimsley-Smith wants the same for her students. Her job focuses on helping students realize what they can do each day to increase their chances of ending up in the place they want to be.

According to Grimsley-Smith, “applying for scholarships is not necessarily about winning, it’s about learning how to apply.”

Grimsley-Smith takes a similar approach to life. Life is about the process of trying, and in the end, it is not magic that gets you where you want to be, it is the little ways that you were diligent every day.