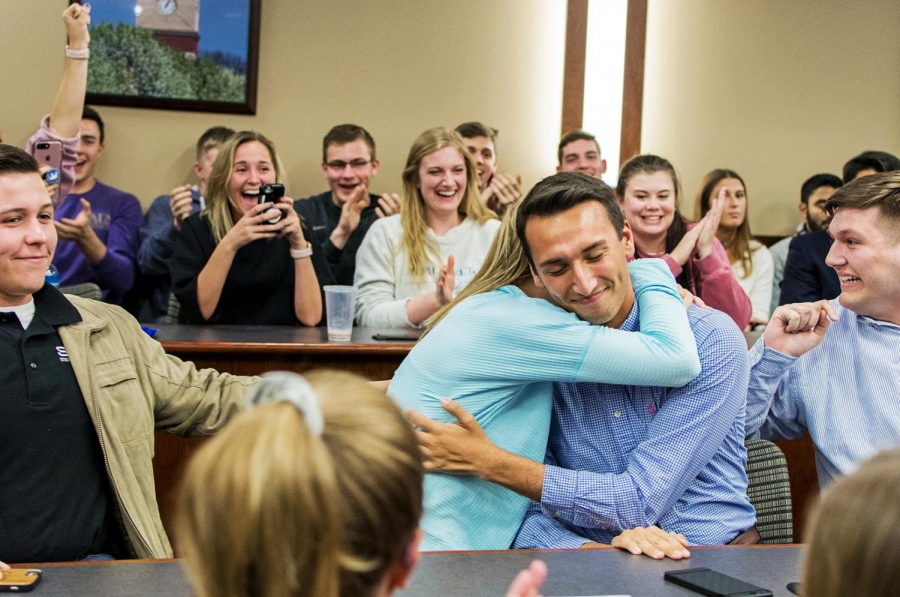 WKU Student Body President elect Stephen Mayer hugs his administrative vice president Harper Anderson after hearing that their ticket won the SGA election. A crowd gathered in DSU until after midnight on April 18 to hear the results.

From strife between its members to controversy surrounding the executive board election race, the 2017-2018 academic year was, to say the least, a tumultuous one for the Student Government Association.

Despite the firestorm of last year, new SGA President Stephen Mayer is optimistic about the future of the association and has plans to improve the lives of WKU students.

Mayer was elected as president in April with running mates Garrett Edmonds and Harper Anderson. He previously served as a senator on SGA for three semesters and spent one semester abroad at Harlaxton College.

Mayer, a biology and chemistry double major, said he believes his time in SGA has prepared him greatly for life after college.

“I am an avid believer that campus involvement makes not only a better undergraduate experience but makes for more opportunities post-graduate,” Mayer said.

Mayer has described his hopes for WKU, aiming for greater transparency from the Board of Regents as well as from SGA itself. Mayer said he is an avid supporter of President Timothy Caboni’s 10-year strategic plan and agrees with most of what it includes.

In addition to his position as SGA president, Mayer also occupies a position as student regent on the WKU Board of Regents.

“My role as student regent has taught me so much about things I have never been aware of that I think will benefit me moving into my future,” Mayer said. “It’s not only all of the wonderful people I am meeting, it’s all of the things I am learning.”

Lately, Mayer has been an outspoken critic of WKU’s fee structure, especially the $450 online academic fee. Mayer was one of two members of the Board of Regents who actively spoke against the increase in fees.

“I understand the university’s need to do this at this time, due to budget cuts from state appropriations, but I also don’t see the need to put all of the financial burden on the students’ backs,” Mayer said.

This year, WKU saw a 4 percent increase in tuition costs, a decision Mayer was against. It comes as part of a plan created by the Council on Postsecondary Education, an administrative board in Frankfort that coordinates higher education in the Commonwealth.

The SGA semester began Sept. 4 with the first administrative meeting at which Mayer discussed the tuition increase and the comprehensive advising program. Additionally, a new standard was outlined for SGA members. Now members are required to log at least one office hour a week for students to meet with senators.