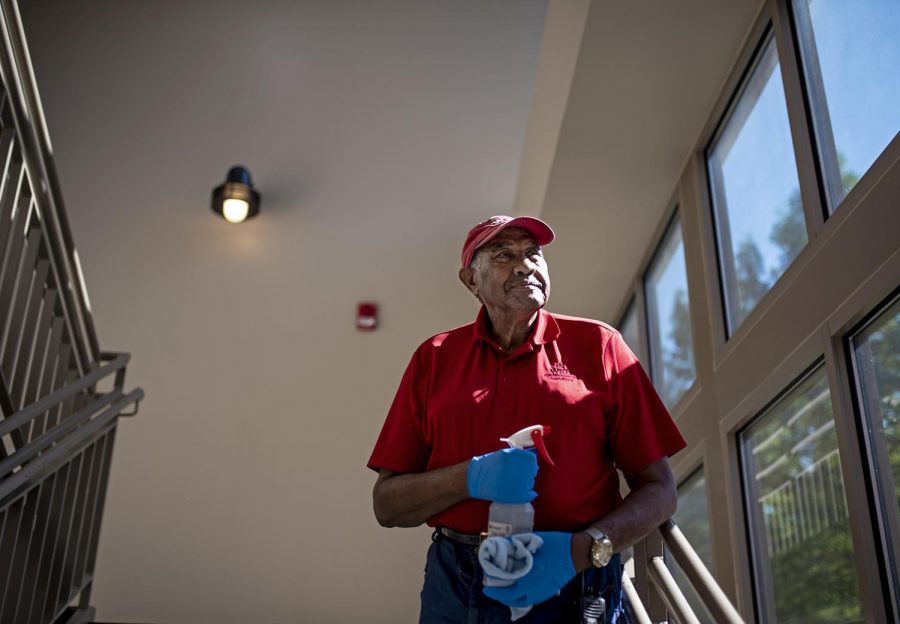 Houston Edison attended Western Kentucky University in 1986 and is currently employed by Sodexo, part of WKU Facilities Management. Along with being a custodian, Edison is also a minister at his local church Next Level, both opportunities for him to interact with people.

Houston Edison seems to always create a happy environment on the Hill. Often smiling and giving out high fives and encouraging words, Edison is no stranger at WKU.

Edison attended WKU in 1986. While on the Hill, he received his degree in elementary education.

Edison is employed by Sodexo, part of WKU Facilities Management. Before being hired, he worked for 34 years with Wearhouse Corporation, which is now as “International Paper Company.”

Edison’s daily responsibilities as a custodian include cleaning the windows of all entrances to Downing Student Union and assisting with power cleaning the floors.

“While doing that, I worked my way through Western,” Edison said. “Whether it had been subbing or volunteering, my love for Western never left.”

Edison said he had to pay for his education by himself, but that didn’t stop him from attending WKU.

While he was an undergraduate student, Edison said he made sure he created lifelong friends he still remains in contact with today. Throughout the years, Edison has made a connection with many people at WKU.

“I love people,” Edison said. “From the student body to the professors and even Big Red, it’s nothing but love.”

Edison said his decision to stay in Bowling Green was based on how he felt about WKU. Edison said he feels that WKU gave him the opportunity to learn, so he wanted to give back to the university. He said his main goal is to leave a legacy on campus.

“It’s not about the money, it’s about the loyalty,” he said.

He built a relationship with both former WKU President Gary Ransdell and current President Timothy Caboni. Edison said he made sure each understood his role on campus—one he considers more important than that of an average custodian.

Senior Christopher Wilborn, president of Building Men of Worth, said Edison played a small role in his life since he began his time at WKU.

“Every time I walk into DSU, he is there greeting everyone he sees with a smile,” Wilborn said.

Wilborn said he believes Edison has never met a stranger.

“When I first had an interaction with him he spoke highly of his faith. That’s what stood out to me,” Wilborn said.

Senior Mason Dunston said more custodians should have the same attitude as Edison.

“I recall walking with my head down in DSU, and I said a simple ‘Hey,’ and he asked me about my day, and I stopped where I was going and told him what was going on throughout my day,” Dunston said.

Edison is also a minister for local church Next Level.

“My faith is very important to me,” Edison said. “From teaching Sunday school since 12 years old, I knew my faith was bigger than I can imagine. Whether it’s being involved with the church, studying and understanding the word, I try to utilize the words to apply it to other people’s lives.”

As a custodian, Edison said he believes sometimes people try to disrespect and avoid him.

“There are days where I might not feel at my best, but I leave the negative energy at my house,” Edison said. “When I step foot into my work, I try to smile and keep positive energy, because life is too short.”

Edison said he wants people to shine their light, despite what the situation might be.

“Do unto others as you would have them do unto you,” Edison said. “It’s not about us, but about God.”

Features reporter Mark Webster Jr. can be reached at 317-874-8618 and @mark.webster [email protected] . Follow Mark on social media at @mwebster68.