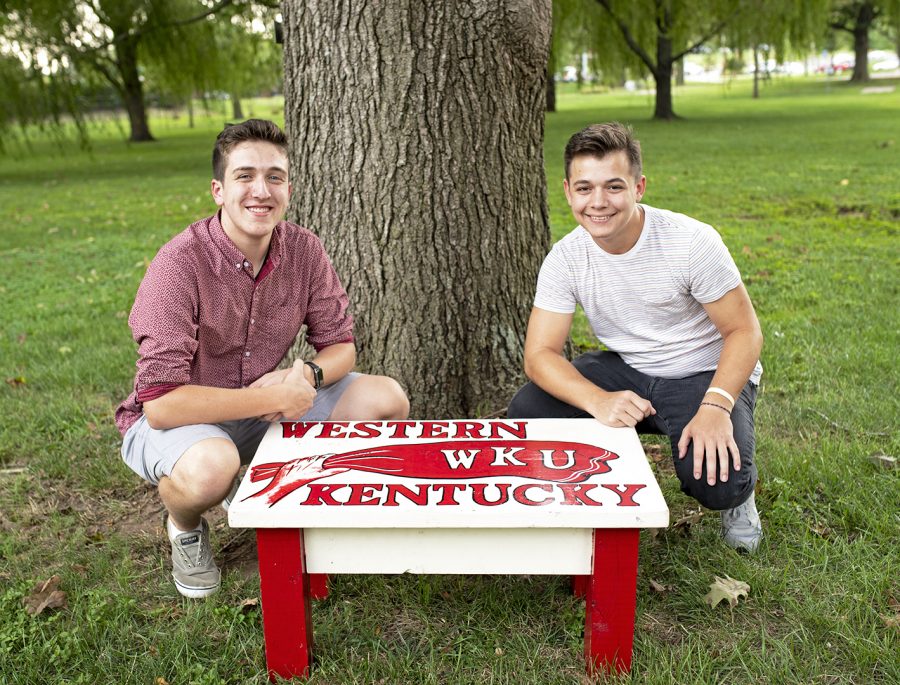 On the second floor of Douglas Keen Hall, a small wooden table stands out amidst the standard dorm furniture. Adorned with a painted version of the WKU red towel, the handcrafted table carries a family legacy.

Tim Price, the original owner, brought the table to the Hill in 1981. The father of his girlfriend at the time did woodworking and made the table for him as a gift.

As an undergraduate student, Tim met his wife, Leigh, in pre-med classes. They started dating in 1983 and married two years later. The couple moved on to study medicine at the University of Louisville and eventually started their family there.

The table that followed Tim throughout his undergraduate career was soon passed down to Leigh’s brother, Todd Turner.

“To be honest, when my brother-in-law Tim first allowed me to use it, I was just happy to have some furniture,” Turner said in an email.

Turner attended WKU from 1984 to 1990, and he earned some “dorm cred” for having the table in his room. Turner had “the coolest table on the fifth floor of Barnes-Campbell.”

The table’s legacy didn’t stop there. Tim’s and Leigh’s oldest son, Jon, attended WKU between 2011 and 2015, and his father’s table was passed down to him.

“I was the first from the family to take it back after 15 years,” Jon said. “[It] started as a joke about tradition.”

Jon graduated in 2015. His younger brother Aaron is now a freshman, and his dorm is the fourth home to the family table.

“The table is a very cherished family tradition that goes back to when my dad came to WKU in the early 80’s,” Aaron said. “I brought it to continue the tradition that we have upheld so far.”

Each member of the Price family had their own reason for attending WKU. Aaron’s reason was for the “music department’s focus on teaching future educators.”

Turner said it was great that his nephews were able to bring the table with them and carry on the tradition he and his brother-in-law started.

Aaron said the table also serves as a good luck charm for the family, as each member who used it has gone on to be successful in their respective careers.

The family still takes pride in WKU and the experience it left them with, and it runs in the family. Leigh, a practicing OB-GYN, calls herself the “biggest unpaid supporter” of the university and readily recommends WKU to her patients and their families.

“The table represents everything WKU has done for our family,” Aaron said. “Meeting people, having fun and getting a quality education.”