How Tidball’s came to be a Bowling Green music sanctuary 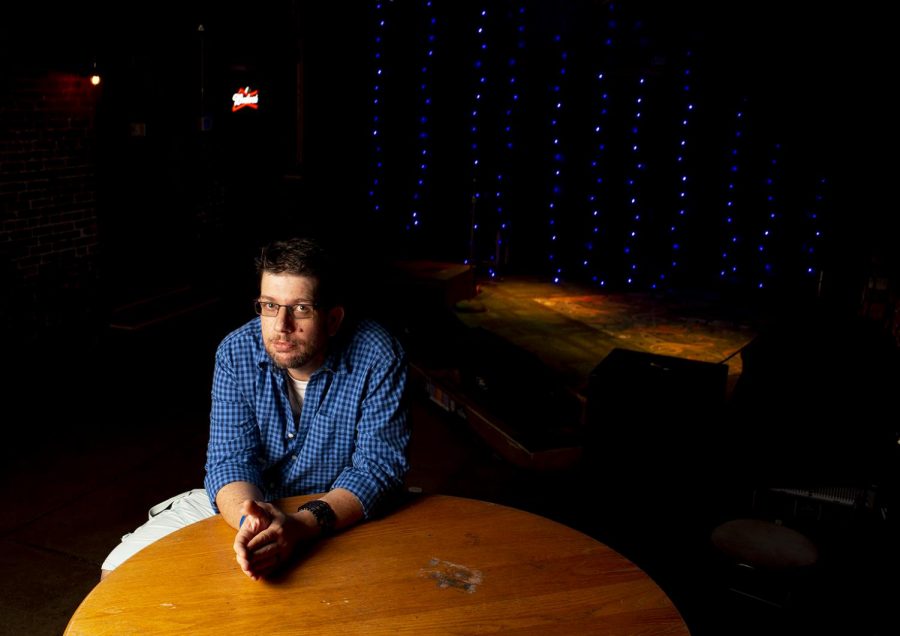 Brian Jarvis poses at Tidball’s on Wednesday, August 29, 2018. Jarvis is co-owner of the bar with John Tidball. The two founded the bar back in 2001. Jarvis grew up in White House, Tennessee. He came to Bowling Green to attend WKU as an English major. Then later decided to get involved in the bar business.

It’s been more than two weeks since President Timothy Caboni tweeted a video of himself driving around campus to alternative rock band Cage the Elephant’s 2008 hit “Ain’t No Rest for the Wicked.” Caboni explained the tweet at a meeting with the Herald editorial board hours later, confirming Cage the Elephant would perform for the first home football game against Maine on Sept. 8.

The concert was held on South Lawn Saturday afternoon in front of a packed field of WKU students.

Long before Caboni found his way back to the Hill and when Twitter was still in its early stages, Cage the Elephant’s music was primarily coming out of one place.

Formed in Bowling Green in 2006, Cage the Elephant has released six full-length albums, performed on “Late Show with David Letterman” three times and even won a Grammy Award in 2017 for its fourth studio effort, “Tell Me I’m Pretty.” Long gone are the days Cage the Elephant first cut its teeth in a gray-bricked bar less than a mile from downtown Bowling Green.

Where Bowling Green found its sound

Located on the corner of Chestnut Street and Morris Alley, Tidball’s has served as one of Bowling Green’s premier locations for live music and cold beer for nearly two decades. From Cage the Elephant to fellow Bowling Green bands Morning Teleportation and Sleeper Agent, many bands have played some of their earliest shows at Tidball’s.

Described by renowned music journalist David Fricke in a 2016 Rolling Stone magazine article as Bowling Green’s “long-running equivalent to CBGB,” a New York City music club where groups like the Ramones and the Beastie Boys got their start, Tidball’s has proven itself synonymous in the Bowling Green music scene.

Tidball’s co-founder and co-owner Brian Jarvis said when he and three others opened Tidball’s in 2001, the venue was one of few Bowling Green’s live music locations where Cage the Elephant fit.

“They were just reckless kids,” Jarvis said, recalling the first time he saw the band—then performing as Perfect Confusion, the band’s original name—play at Tidball’s around 2005. “Back then, there really wasn’t any other place to play.”

Even as newcomers to the Bowling Green music scene, as both Perfect Confusion and Cage the Elephant, Jarvis said the band has always been electric in its stage presence.

“We’d stop working,” Jarvis said. “There’s just something about them. The whole room would just be enthralled.”

Jarvis went on to describe the band’s antics at its most recent Tidball’s performance, which took place in 2013, years after Cage the Elephant became a nationally-known band. Jarvis said he remembers the band’s lead singer, Matt Schultz, crowd surfing and hanging upside down from a chain situated near the bar’s inside balcony.

During the band’s first “Late Show with David Letterman” performance, the band’s bassist, Daniel Tichenor, wore a Tidball’s t-shirt during a televised performance of “Ain’t No Rest for the Wicked.” Jarvis said Tichenor called the bar after to say he wore the t-shirt in honor of Tidball’s, the place where the band got its start.

“That was the coolest freaking thing in the world,” Jarvis said. “It still doesn’t seem true. It doesn’t seem like it happened.”

Longtime Tidball’s employee Kenny Kessinger, a Bowling Green native who worked at the bar from 2003 to 2013, said in a text message that it was unbelievable to see Cage the Elephant take off outside of Bowling Green. Kessinger said he had no idea how widespread the band had become until he heard one of its songs being played in a South Carolina bar.

“It was surreal,” Kessinger said. “We had some guys who we had watched come into their own right before our eyes. They had been in a band previously that had grown a small fan base, but the fans for Cage were rabid.”

Kessinger said he believes Cage the Elephant’s success opened the floodgates for other Bowling Green bands, as musicians started to see potential in making a living out of their passion

“It felt like Cage basically wrote the blueprint for success outside of BG, and there are still bands using those blueprints today,” Kessinger said. “They proved that if you work your ass off, you can be successful.”

As high schoolers in White House, Tennessee, Jarvis and Tidball’s co-founder and co-owner John Tidball met while playing on their high school’s basketball team. Both went on to study at WKU and eventually work at a bar and restaurant called Kelly Green’s.

After Kelly Green’s closed in 2001, Jarvis, Tidball and two others pooled their money to rent the building that would become Tidball’s, officially opening the bar in December 2001. Still in need of renovations and a stable alcohol distributor, Jarvis and Tidball sold beer cooled with store-bought ice out of plastic storage tubs.

Tidball said he and the others opened Tidball’s as a way to work for themselves and have fun, knowing the bar’s future was never guaranteed.

“We didn’t have a whole lot of expectations,” Tidball said. “We were both in our 20s still, so it was kind of like ‘Let’s just have some fun, and hopefully we’ll do it at least three years or so.’”

Tidball said the bar was opened with live music in mind, as live shows were always what he looked for when going to a bar.

“I just kind of always wanted it to be a place that you could come see music,” Tidball said. “That’s kind of what I like.”

Though Tidball’s was largely the creation of two just-fired friends, Jarvis said he and Tidball have always stood by their bar. Unable to hire workers to clean out the original rented space, Jarvis, Tidball and a number of friends devoted entire days to renovating the building and preparing it for business.

“It’s special to us,” Jarvis said. “We built this place from the ground up.”

As you walk into Tidball’s, you might notice a lack of space designated to the actual bar. Instead, just past a narrow balcony staircase, preceded by feet of barren standing space, lies a stage seemingly oversized for the grungy, dimly-lit room. It’s apparent Tidball’s is first and foremost a place for music.

Lead singer and rhythm guitarist Cris Rutledge of a Bowling Green band called The Cartoons explained the phenomena as an effect of years spent housing local bands. Rutledge said Tidball’s is “crucial” to Bowling Green musicians, especially when starting out.

“You get your first Tidball’s show, then you’re a Bowling Green band,” Rutledge said. “It’s a rite to passage.”

Along with operating as a starting ground for talented musicians, Brown said he believes Tidball’s is unmatched in its mastery of providing musicians with an environment that lends itself to good performances. As someone who has performed in and around the area for years, he said Tidball’s is always the Bowling Green venue he looks forward to most.

“The energy in that room is great,” Brown said. “There’s some magic in there.”

Brown said he’s been going to Tidball’s to perform and watch other bands perform for almost a decade. In that time, he said he’s established an almost familial relationship with Jarvis and Tidball.

“Tidball’s is where it’s at,” Brown said. “It’s the best bar in Bowling Green. They’re like family to me.”

Perhaps it’s best known as the home of Cage the Elephant, but Jarvis said Tidball’s is really a place for all musicians, Bowling Green and its people.

“We’re always quick to point out that without the musicians, without the community, there would be no Tidball’s,” Jarvis said. “We’re nothing special.”

Though Tidball’s has no plans to expand, Jarvis said the bar has no plans of slowing down either. With local venues like The A-Frame and Rocky’s Bar having been in operation for years, when Tidball and Jarvis do eventually slow down, Jarvis said he only hopes Bowling Green music is left in good hands.

In the meantime, Jarvis said he and Tidball are busy preparing for an upcoming Tidball’s Live on the Lot event, which will take place this weekend, Sept. 13-15. Live on the Lot is a bi-annual music event held at Tidball’s in support of local artists and the Alex’s Lemonade Stand Foundation, the leading national childhood cancer nonprofit.

Shaped by nearly 18 years of musicians who did and did not sign record deals, Tidball’s remains the stronghold of the Bowling Green sound. As the place where Cage the Elephant and countless other bands played their first show, Jarvis said he’s honored to have been there.

“It’s just so rewarding,” Jarvis said. “It’s something that I’ll take to my grave with me.”