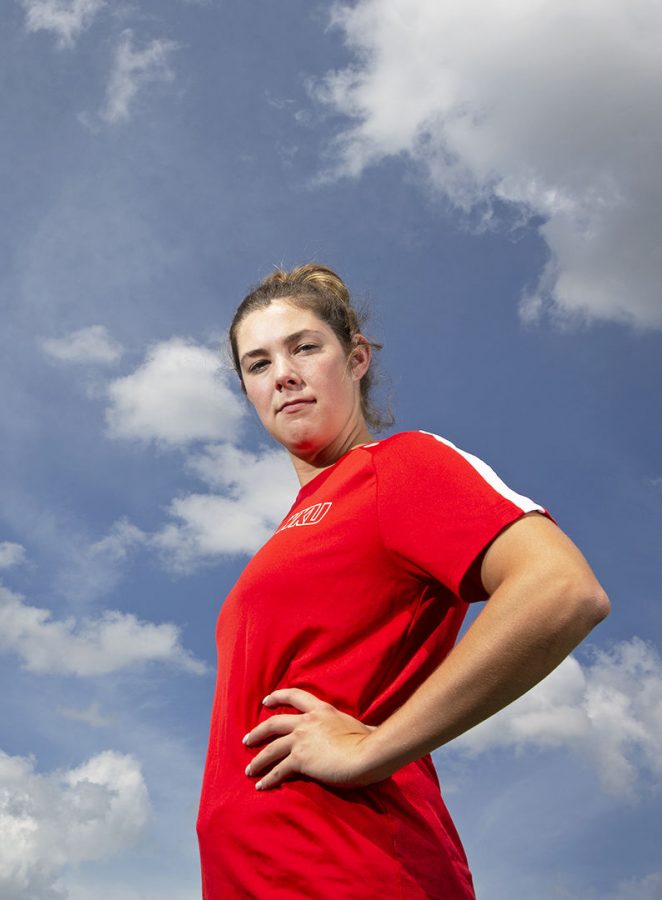 Former Lady Topper Volleyball player Sydney Engle to join the WKU Soccer team as a goalkeeper.  Engle changed from volleyball to soccer due to new NCAA rules that lets individuals switch between sports after graduation.

That was Sydney Engle’s initial reaction when head soccer coach Jason Neidell told her he was going to put her in the game for the first time.

On Aug. 31, it was announced Engle had joined the WKU soccer team as a backup goalkeeper. The Lady Toppers were down to only Bailee Witt at the position after an early season injury to the original starter, Anne-Marie Ulliac.

Three days later, Engle was making her debut for the Lady Toppers on the pitch.

The Lady Toppers had full control of the game, leading Kentucky Christian 9-0 with just under 20 minutes remaining in the match. Witt, the starting goalkeeper, had yet to see a shot on goal, and it was clear that WKU had the game won.

“They told me that I literally just had to go out there and stand,” Engle said. “And I was like, ‘Okay, but if it does come to me, I don’t know what to do yet, but I’ll try my best.’”

“My first practice wasn’t until the next day.”

In the 73rd minute of the match, Engle made history. She became the first WKU female student-athlete to play both volleyball and soccer. She was only the second in Conference USA history to do so.

For Engle, making history involved going from master to student. WKU volleyball fans knew Engle well before her soccer debut as a star for the Lady Toppers on the court. She was a three-time Second-Team All-C-USA honoree and finished her career 10th all-time on WKU’s sets and matches played lists. She was also a part of a WKU senior class that won four straight C-USA Championships.

Quickly though, Engle has learned that her background in volleyball might be her greatest tool in helping her learn the game of soccer.

Those parallels are what led to Neidell contacting volleyball coach Travis Hudson about any former volleyball players that may be able to come in and help the team. For Hudson, the decision to suggest Engle was an easy one.

“She’s a fantastic kid that looks the part,” Hudson said. “I know she’s incredibly coachable, so I thought if they saw something in her to think it was possible, then she’d be a kid that would get better for them because of how hard she works. If there’s any soccer ability in there at all, she’s the one that you want.”

As excited as Hudson was about presenting the idea to Engle, she said she was initially much less receptive to the thought of learning a completely different sport and fitting it into her schedule. Engle said she was happy to help if it didn’t take up too much of her time. Hudson said he eased her into it.

Engle is now two weeks into her goalkeeper training. For her, the adjustment has gone beyond just switching sports but as she gets acclimated to a new group of teammates.

“I knew some of the soccer team coming into it, and they made it easier to ease into the ones that I didn’t know,” Engle said. “They were my gateway into the team, and I’m glad I’m back on a team.”

That feeling of being back on a team, combined with her natural competitiveness, is what has propelled her to pursue doing whatever she can to help the team.

With the volleyball season well underway, Hudson has his focus set on coaching his team of Lady Toppers. But that hasn’t kept him from continuing to watch and support Engle as she continues her new path.

“It’s just fun to watch her do this,” Hudson said. “I told her yesterday that I’m going to sneak out and watch her practice soon, and if I don’t like what she’s doing, I might yell at her from the stands. She’ll probably have a big smile on her face if I do.”

When Hudson contacted Engle about joining the team, she did so because she wanted to do what she could to help them. Looking back on that moment, Engle said she now knows that this experience has begun to return the favor.

Engle said that being with teammates––albeit new ones––in a team environment has made her feel a lot more comfortable. She also said it’s made it easier to not be on the volleyball team anymore.

“At this point,” Engle said, “They’ve probably done more for me than I’ve done for them.”