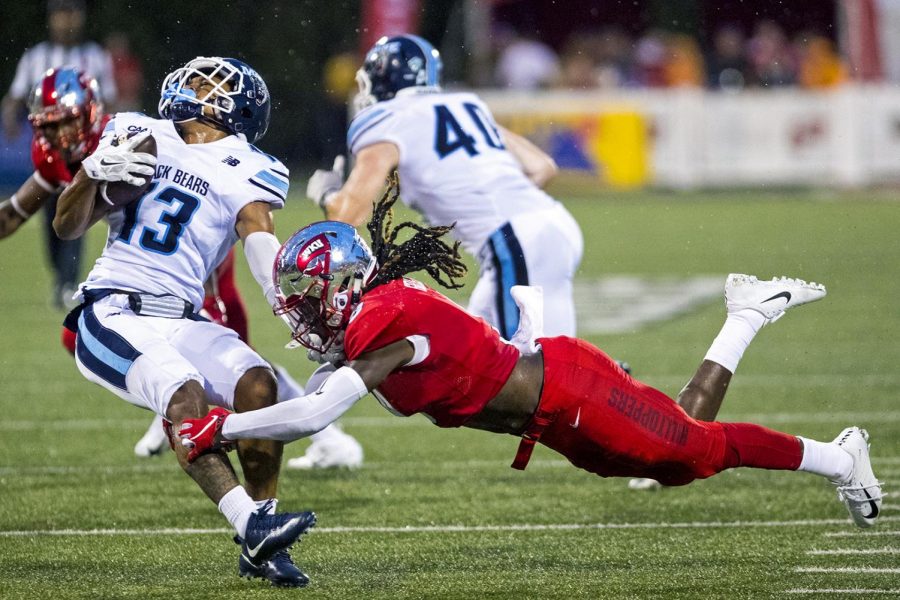 For a fleeting moment on Saturday night, it felt like 2016 again for WKU football fans, as the Hilltoppers jumped out to a 21-0 lead over Maine in the first quarter of their Week 2 matchup.

That feeling didn’t last, as Maine ran off 31 straight points and the Football Championship Subdivision team walked away with a 31-28 victory and a $300,000 check.

WKU has now lost seven of its last eight games dating back to last season, with Saturday’s game being the first Hilltopper loss to a FCS school since 2011, when they lost to Indiana State. Head coach Mike Sanford spoke after the game about the loss.

“Almost unexplainable the factors that led to it,” Sanford said of the comeback. “It was just kind of piece by piece. We got a little out of rhythm offensively.”

One of the major issues for the Hilltoppers was a struggling offensive line.  WKU surrendered six sacks that resulted in 42 lost yards. The inability to move the ball culminated in 12 straight scoreless drives after scoring 21 points in just over five minutes to open the game.

WKU was also unable to get any sort of run game going, only managing 42 rushing yards and averaging 1.4 yards per carry.

“We’ve got to be able to run the ball in between the tackles,” Sanford said. “That was obviously disappointing. I thought we ran the ball well in between the tackles against Wisconsin’s front, and honestly we came into this expecting Maine to blitz a whole lot. In that first half, there’s really only seven pressures so it wasn’t really a ton of pressure, wasn’t a ton of blitz. We’ve just got to be better on our combinations and we’ve got to make sure that everything’s tied in well together.”

Improving the run game was a focal point for the entire offseason and preseason, but that aspect is still a struggle for WKU.

The Hilltoppers’ leading rusher on the season is freshman Garland LaFrance, who currently has 37 rushing yards on the season. After the game, junior running back Marquez Trigg said he didn’t feel the run game had taken a step back.

The run game’s biggest struggle came in the third quarter when the Hilltoppers went for it on fourth-and-1 at their own 15 and failed to convert on a carry by Trigg.

After the game, Sanford took blame for the failed conversion.

“I feel that we needed some juice, needed some offense,” Sanford said. “You know our offense to get that push and wanted to give our guys an opportunity to go out and earn that fourth down conversion, and at the end of the day, that was a call that was detrimental to the overall course of the game. There’s no doubt about it.”

Redshirt senior quarterback Drew Eckels was off-target at times throughout the game, completing 23-of-42 passes. WKU did not use Eckels’ ability to scramble nearly as much in Week 2 after being the team’s leading rusher during the Wisconsin game.

Sanford said Eckels came into the game banged up and protecting him was the reason for his lack of involvement in the run game.

“It played a role in it for sure,” Sanford said. “Partly it was predicated by the defense and what they were doing, but it did play a role.”

WKU will attempt to soothe the pain from the loss against a Power 5 school on Saturday when they travel to Louisville to take on the 1-1 Cardinals and former Hilltopper head coach Bobby Petrino.