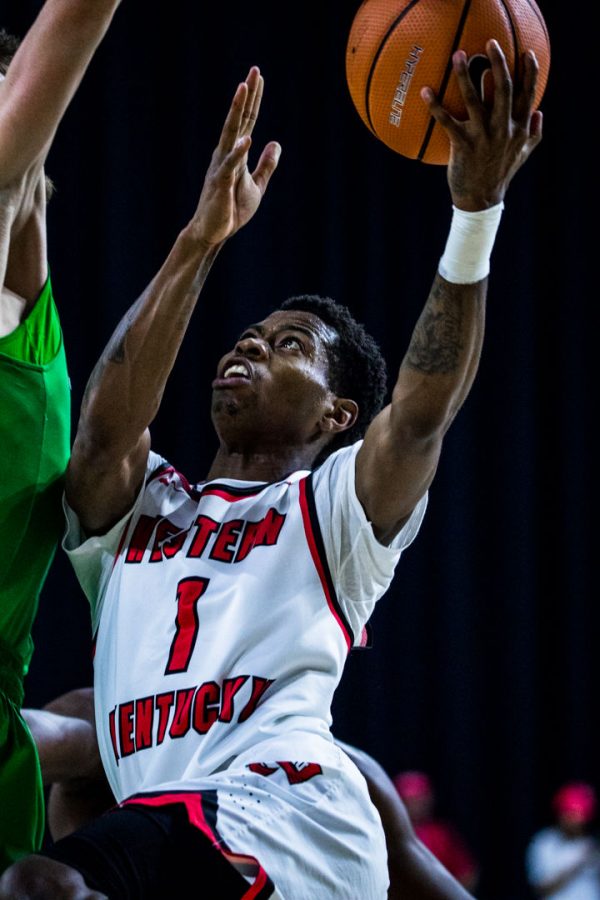 WKU Guard Lamonte Bearden (1) goes up for two during the Hilltoppers 67-66 loss in the championship game of the Conference USA tournament against Marshall University on Saturday March 10, 2018 at The Star in Frisco, Tx.

Bearden entered his name into the NBA Draft after his redshirt junior season, but withdrew before the deadline to return to WKU.

“He will not be able to play until … the end of the first semester,” Stansbury said. “That comes from some late-spring decisions, and, you know, maybe entering the draft and not finishing up some academics.”

If Bearden regains his eligibility after the first semester, he’ll be eligible to play in the Hilltoppers’ game against Troy on Dec. 16.

“As long as he takes care of business this fall, he’ll be fine at the end of this school semester, and hopefully should graduate,” Stansbury said.

Bearden averaged 11.8 points and 3.4 assists in 38 games for the Hilltoppers last year. His ineligibility leaves WKU without its starting point guard from last year for the time being.

“We’ll have to move some guys around, which we’ve done anyway,” Stansbury said. “You know, you’ll see Josh Anderson getting a chance to play that role … the young kid, Dalano [Banton], is a guy that we think can play it some, and you know, we know Hollingsworth can play it some.”