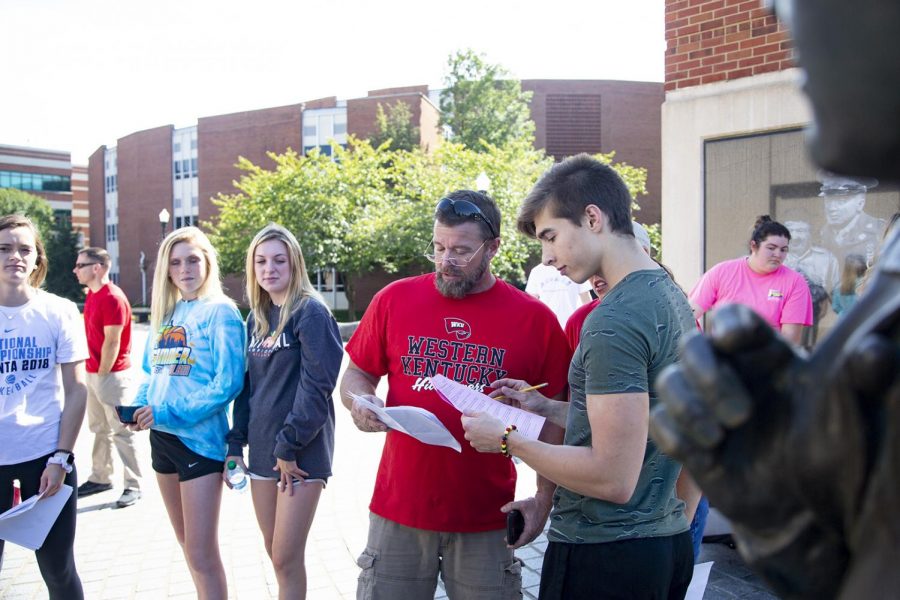 Western Kentucky University student's and parent's look through their scavenger hunt sheet as they solve a riddle at the GuthrieTower during the WKU Parent and Family Weekend. Jake, Freshman, and his dad David check another riddle off their check box. "I think the statue's button is what the riddle is," Jake said while his dad checked off another solved riddle.

Students and their families split up into teams to decipher clues and potentially win prizes at WKU’s first Parent and Family Weekend Treasure Hunt at the Downing Student Union on Saturday.

The treasure hunt included student teams and family teams going to 20 different outside locations on campus based on provided clues. With the clues, the teams had to fill in the answers and be the first team to reach Cherry Hall with all of their answers correct.

The first student team that found all of the answers won a $75 Amazon gift card, and the first family team who found them won a $200 Chili’s gift card. Prizes were also awarded for the top five runner-ups in the two team categories, and all teams were entered to win a raffle for WKU souvenirs. The event featured more than 15 student teams and more than 20 family teams.

Anthony Harkins, WKU history professor, said the event was a new way to discover WKU’s history. This was because the locations, objects and answers that the teams found during the hunt were based on the university’s history.

“I think it’s a fun way to discover the campus,” Harkins said.

Some students were able to receive extra credit for participating in the event. Emaleigh Stevens, a Louisville freshman undeclared major, was one of these students, and her team included her mother and her stepfather.

Stevens said she and her family had different specialties that she hoped would help them succeed in the race, including prior knowledge of the campus, history and sports.

Gabi Broekema, a freshman photojournalism major from Bowling Green, said she also signed up with her friend for the treasure hunt to get extra credit in her history class, as well as learn more about the campus.

“We work together well,” Broekema said, regarding her team of two.

Melissa Swift, a mother from Elizabethtown, came down to WKU to spend time with her son, a freshman WKU student. Swift said she had never participated in a treasure hunt before. With the four members of her team, she hoped to learn more about WKU and its campus.

“I think this will be very interesting for us,” Swift said.

“We didn’t expect to win,” Morgan said. “It’s really rewarding because we walked up and down the Hill for almost three hours.”

Kennon said she wanted to do the scavenger hunt to receive extra credit in her history class and she asked Morgan if he wanted to participate.

“There was more of a chance of winning money if we did this in pairs,” Kennon said, saying the two will split the $75 Amazon gift card.

Harkins said he has seen a lot of interest in the event from students and their families.

“We’re hoping to do this again in the future and I’m hoping they find out things that they didn’t know about the campus before,” Harkins said.