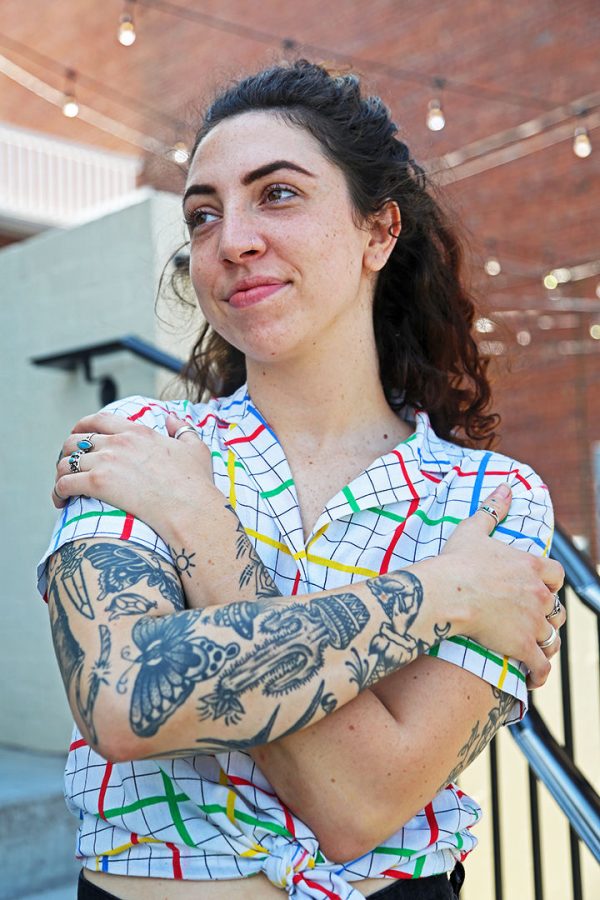 Jennie Fowler, 25, Bowling Green local artist, is showcasing several of her art pieces on display in Spencer's coffee shop where she works. Fowler owns the Instagram account @shopjanewolfe where she posts photos of her work to in order to sell to customers.

WKU alumna Jennie Fowler describes her budding art business, Jane Wolfe, as a “one-woman show,” and if recent history is any indication, the curtains will not be closing on its success any time soon.

Fowler, 25, grew up in Bowling Green and discovered very early on that she had a passion for creating art. While she enjoyed the various crafts she made for herself, Fowler said her favorite works were the ones she shared with her family.

“I was always really into making cards for my mom and my grandma,” Fowler said. “Sometimes on their birthdays but Christmas cards especially. They’ve always kept them and I know they love them. My mom cries every time, and it’s just really sweet.”

In December 2016, Fowler decided to try something different while making her family’s Christmas cards. She taught herself relief printing using online videos and began sketching on tracing paper. Fowler then transferred her designs onto soft linoleum, which could be carved out to make stamps. Fowler said that after stamping the first card that Christmas, she fell in love with the technique.

By early 2017, Fowler had coupled her new printmaking process with an interest in fabric. She said that after taking a class on textile design in college, she became enamored with the idea of printing on them. Using stamps and salvaged clothing, Fowler forged a path for an online business venture.

“I posted some random pictures of the things that I had made and people started commenting on them,” Fowler said. “I wanted to go visit a friend in California around that time, so I got some plain t-shirts and sweatshirts and I printed on them. I was like, ‘If anybody wants these I’m going to sell them and try to get a plane ticket.’ I sold them pretty quick, and I just kept doing it from there.”

Fowler was so encouraged by her early success that she began accumulating the materials and designs necessary to start her own online shop. Less than three months from the time she made her first relief prints, Fowler opened her store on March 17, 2017. However, the website did not contain any references to Jennie Fowler, only Jane Wolfe.

Fowler graduated from WKU in 2015 with a degree in advertising and graphic design, which she said helped her understand the importance of branding. She wanted to reserve her given name for dedicated personal ventures like photography and calligraphy, so Fowler decided to brand her web presence with the name Jane Wolfe, a name that she had used online years prior.

“The name is just letters from my name that I rearranged to make a different name,” Fowler said. “I came up with it in high school because back in the days of Tumblr, I wanted to use a different name so my teachers and my mom couldn’t find me on the Internet and read all my depressing 14-year-old antics. I hadn’t used it in a really long time, but I thought something better could be done with it.”

Fowler’s store sells numerous items, including t-shirts, tote bags, stickers, enamel pins and prints. The products are adorned with Fowler’s hand-drawn designs, all of which are inspired by traditional American tattoo flash, otherwise known as the pre-made designs that adorn the walls of tattoo parlors.

As Jane Wolfe continues to grow, Fowler said it is sometimes hard to manage all of her responsibilities.

“Unfortunately, art is not my full-time gig,” Fowler said. “I would love to be a full-time artist and not work a job, but I feel like you’ve got to have this extra sum of money helping you out and I don’t have that. When I do put all of my energy and attention into it, I can really reap the benefits, but it’s a lot to do while working full-time.”

Fowler has worked full-time at Spencer’s Coffee for several years, and she said she loves her job. The feeling seems to be mutual, as Spencer’s actively helps Fowler with her Jane Wolfe work by displaying her prints on the wall for customers to see and purchase. In addition to the people she has met, Fowler’s time at Spencer’s has helped her figure out what she does and does not want in her future career.

“I have a degree, so I could work in an office and make art for other people,” Fowler said. “There’s just something deep down inside of me that can’t do it. I don’t want to be told what to draw or what to make, I like to have my independence. Some people really like the business side of art, but I want to work for myself. Nine to five? That ain’t me.”

Natalie Rickman, Fowler’s co-worker at Spencer’s, said that she is not at all surprised by Jane Wolfe’s success because she knows how determined her friend is. Rickman has known Fowler for years, but the duo created a close bond after they started working together.

“Jennie is like a Renaissance woman, one of those people that’s just kind of good at whatever they try,” Rickman said. “As a person she’s super solid, and as an artist I love what she’s doing. Jennie and I bond over being artists as well as being Capricorns. We have very similar personalities, and I’m so lucky to have connected with her in my life.”

Even though it has been difficult at times for Fowler to give her undivided attention to Jane Wolfe, the brand has still gained a reputation for itself, amassing nearly 1,000 followers on Instagram. Fowler said that her primary concern at the moment is getting her name out and cultivating a dedicated customer base using social media.

“The more you’re present on social media, the faster things happen,” Fowler said. “I’m very aware of that because anytime I make something new and I post about it online, it generates a lot of traffic. I can make quite a few sales online if I really sit down and post every day, so time management will absolutely have to be something I work on.”

In the future, Fowler hopes to expand Jane Wolfe’s reach. She wants her products in stores, and she said that she has spoken to retailers in Nashville and Atlanta about selling her work. Fowler also said that she wants to continue collaborating with other artists, namely Jim Madison of Print Mafia, a design company based in Bowling Green.

“Working with Jim Madison was a really humbling experience for me because I have been buying Print Mafia’s art since I was 13 or 14 years old,” Fowler said. “Years later, Jim is my neighbor and we start talking about art and then we print together. Now when he has art shows, my art is next to his, and that’s crazy to me. Jim and [his business partner] Connie [Collingsworth] have really been huge mentors and I’ve loved it.”

TOMORROW! My awesome neighbor @jimhmadison and I are hosting a free outdoor event to kickstart holiday shopping 🤘🏼 it’s shop small Saturday so come check out some local artists and enjoy the sunny weather with us. It’s gonna be a blast ✨✨✨

Fowler’s work is not only her obsession, she said, but also her therapy. Fowler’s described the warm feeling she gets when she holds something that she has made in her hands as very rewarding. However, she said it is not always easy for her to appreciate the countless hours she pours into her craft.

“A big thing that I’ve always struggled with is being so hypercritical of my own work,” Fowler said. “I have always been like, ‘Oh, this little line or this little part, nobody can see this, it’s not perfect.’ As artists, we are never as impressed by our work as other people are, but someone can be genuinely impressed and blown away by something. We shouldn’t doubt ourselves, just go out and do it.”

Fowler said she likes being able to say she does everything for Jane Wolfe, but she is wary of pressuring herself to the point that her passion becomes a burden. She said she wants to make sure the relationship she has with her art is rooted in love, not necessity. Whether Fowler uses her artistic talents to make Jane Wolfe the next big thing or she decides to pursue a career as a tattoo artist, one thing is clear: Fowler is ready for it all.

“When you’re in school, they teach you all this stuff but you don’t really know what to do once you get out,” Fowler said. “You’re kind of like a lost dog, but you just pick up on things that really resonate with you. Art can speak to people on so many different levels for so many reasons, and I love that. It’s always been a passion of mine and so whatever happens, happens. I will never not be making art.”