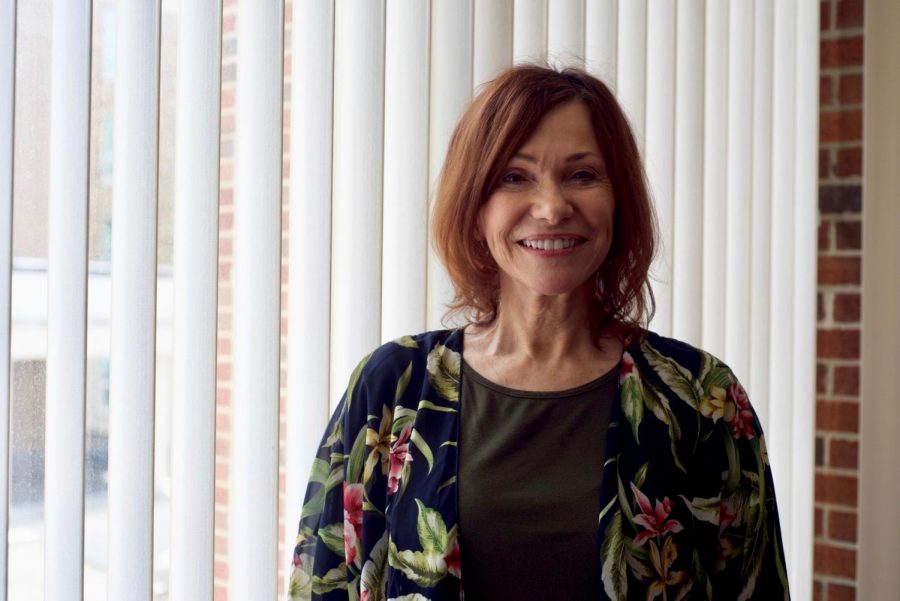 Terry Ballman began her role as provost in August, replacing former provost David Lee. She previously worked as the dean of the College of Arts and Letters at California State University, San Bernardino since 2013.

In a video posted to YouTube, faculty and students of the College of Arts and Letters at California State University, San Bernardino (CSUSB) pose in an art exhibit for the “mannequin challenge.” Terry Ballman, incoming provost and vice president of academic affairs for WKU, can be seen stepping out from the poses, pushing the play button on a radio and breaking the poses as she wishes everyone a happy holiday.

Another YouTube video shows Ballman getting into the driver’s side of a car with members of faculty from the college. As she starts driving, everyone breaks out into what she calls “CAL-pool Karaoke,” borrowing from comedian James Corden’s “Carpool Karaoke.”

The videos are two of the annual holiday videos Ballman helped create for CSUSB’s College of Arts and Letters. She laughs as she remembers the experience she had while making them.

“It was a product of teamwork,” Ballman said, describing the videos. “It wasn’t just me. It was a group of people coming up with the best ideas, and that’s the way we need to approach it.”

Ballman, who was dean of the College of Arts and Letters at CSUSB, assumes her role as provost and vice president of academic affairs at WKU today, replacing current provost David Lee. Before applying for the position, Ballman served as dean since 2013.

Ballman grew up in California as an only child with a mother who was a homemaker and a father who repaired washing machines. After completing high school, Ballman attended California State University at Long Beach as a first-generation college student and received her bachelor’s degree in Spanish in 1976.

Ballman received her master’s degree in Latin American literature from California State University at Long Beach in 1980, and she earned her Ph.D. in Hispanic linguistics from the University of Texas at Austin in 1985.

Before serving at CSUSB, Ballman worked at Western Carolina University, University of Northern Colorado, California State University in Long Beach and Binghamton University in New York, according to her curriculum vitae.

Ballman married her husband, Brian Morrill, in 1985. The couple adopted their oldest son, Alex Morrill, and had their second son, Nick Morrill. She also adopted a 20-pound cockapoo dog named Buddy, who was described as the College of Arts and Letters’ unofficial mascot in her CSUSB bio.

“It was good timing for me, so I don’t feel guilty leaving my children,” Ballman said, regarding her decision to apply for WKU. “They are adults, but they’re always your children.”

David Lee, who has served as provost for three years, spent time with Ballman briefly as she searched for a new home in Bowling Green.

“I think she is very well prepared for the role,” Lee said. “This is a very exciting job at a very exciting time for the university. I would advise her to thoroughly enjoy this opportunity.”

Comparing past to the present

Although CSUSB and WKU are similar in their numbers of students, with both totaling about 20,000 students, one of the main differences Ballman said she noticed between the two universities was their ties to their surrounding communities.

She said WKU has a greater connection to its surrounding Bowling Green community than CSUSB has with San Bernardino, California.

“There’s a real pride,” Ballman said, regarding WKU and Bowling Green. “It gives a sense that this community would not be what it is today without the university.”

As Ballman fondly remembered creating the holiday videos with her coworkers, she said the videos were “kind of silly” examples that illustrated her leadership style, which she described as being based on teamwork and collaboration.

“Everyone needs to make a contribution and everybody needs to work collaboratively to implement good practices,” Ballman said. “It builds consensus and it can oftentimes produce the best ideas.”

Ballman said one of her favorite collaborative experiences took place when she worked at the California State University Channel Islands, a regional campus for CSU located in Camarillo, California. Working together with department chairs from the business college at the university, she and other professors created interdisciplinary courses to help students get out of their comfort zones.

“It wasn’t me telling faculty because that’s not the way it works,” Ballman said, referring to creating the interdisciplinary courses. “It’s like, ‘let’s get people in the room, what are the issues, what are the questions we need to ask ourselves and what are ways that we can address them.’ Setting up those opportunities is really important.”

Some of the courses that were created included a Spanish theater class, an English finance class that discussed money’s role in literature and an entrepreneur communication class. The classes helped students learn how to present themselves better and improved their grades and confidence, she said.

In her 33-year career, Ballman has had to make difficult decisions that she felt were necessary for financial success.

One example of this is when she started as dean in 2013. During that time, Ballman said that about $400,000 was being spent each year for undergraduate classes in the college with fewer than 15 students. She said she had to make the unpopular decision to create a minimum class policy to reward professors teaching large classes and to better manage the college’s budget.

“It was my job to make sure that our practices were sustainable,” Ballman said. “We’re relying on taxpayer money, on student tuition money especially, and we cannot be wasteful. It’s just not fair.”

In regards to WKU working with a private consulting firm to create a new budget model, Ballman said she still had to learn more about the specifics and as the university creates the new model, it will probably need to review programs to see if changes need to be made.

“You want to make sure that programs are funded appropriately, and then you want to look at more programs and maybe ways to make them more productive,” Ballman said. “I think with President Caboni’s focus on being a student-centered applied learning institution with impact on the region, I think we need to look at programs that way, too.”

Larry Snyder, dean of the Potter College of Arts and Letters, said in an email that he looks forward to working with Ballman. He said that while at WKU, he has worked with the four previous vice presidents of academic affairs before her.

“She brings a great deal of experience and energy to the job,” Snyder said in his email. “We look forward to working with her as WKU restructures and implements a new budget model. I am most hopeful that she will bring a strong commitment to the liberal arts as the essential foundation for a university education.”

Focusing on the strategic plan

Another focus for Caboni’s administration is the university’s new strategic plan, which he started drafting after taking office on July 1, 2017. The official plan will be unveiled at the convocation in August.

Ballman said the new budget model and the university as a whole need to abide by the goals of the strategic plan. Although she said she did not know Caboni well yet, Ballman said she looks forward to working with him.

“I think he would expect me to articulate and clarify his vision but tailored to academic affairs,” Ballman said, referring to Caboni.

As provost, Ballman will be involved in hiring a new dean for WKU’s Graduate School, College of Health and Human Services and Gordon Ford College of Business.

Although hoping to rely on help from the search committees for those positions, she said she hopes to hire new deans who are clear communicators.

Cheryl Stevens, dean of the Ogden College of Science and Engineering, said in an email that although she only met Ballman about a week ago, she said she seemed very nice to work with.

Describing herself as student-centered, Ballman says that some of her fondest memories as a faculty member have come from former students who told her that she made a difference in their lives.

“I can never forget who we serve,” Ballman said. “We serve students at the end of the day.”

As Ballman and her husband continue to unpack boxes and settle into Bowling Green after driving for three days to reach their new home, she said that people in the community “get all excited” when they learn that she will become WKU’s new provost.

“It’s rare to be in a community where people know what a provost is,” Ballman said. “People think it’s important and that’s nice. I’m genuinely happy to be here.”

Editor’s Note: A previous version of this story said that Terry Ballman is still dean of the College of Arts and Letters at CSUSB. She left the dean position to become provost at WKU.