Hilltoppers look for improvement in second year under Sanford 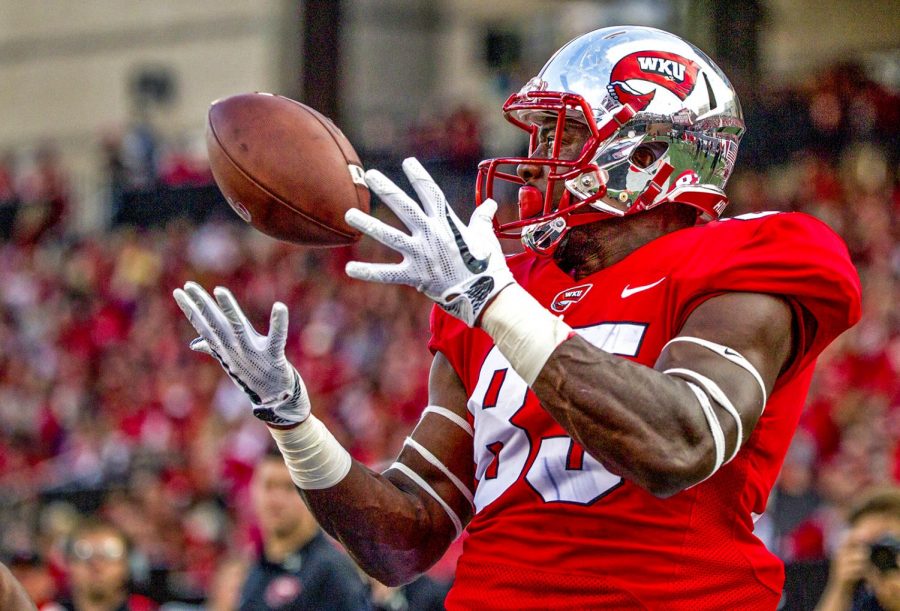 WKU football is looking to outperform 2017’s 6-7 record as well as the outside expectations against a tough schedule.

Expectations aren’t high, as WKU was picked to finish fifth in the East Division of C-USA in the preseason media poll.

Speaking to the media after Friday’s practice, Sanford said that his team is tired of hearing predictions before their game against Wisconsin.

“I think we’re all collectively pretty tired of the prognosticators,” Sanford said. “We just want to go play football and let the chips fall where they may and control what we can control and that’s our effort, that’s our execution. It’s a fun group to be around, and it’s a group that I think is poised for something special this year and in years to come.”

One of the key elements to this year’s team finding success will be new starting quarterback Drew Eckels finding success. Eckels, who was used mostly in mop-up roles last season, replaces Mike White, who led the team to its second straight C-USA title as a junior and was drafted by the Dallas Cowboys in April.

Eckels expects to have success every time the offense gets the ball.

“Offensive goals is to not give any turnovers over,” Eckels said at WKU’s media day. “No interceptions. To score, I’m going to say score 100 percent of the time we get the ball. That’s the goal.”

The Hilltoppers will also have to find success on the ground after a lackluster 2017 campaign. The Hilltoppers failed to get to 1,000 rushing yards as a team last year. Redshirt senior D’Andre Ferby led the running backs with 373 yards and three touchdowns.

Ferby is back this season and will be looking to maintain the starting job after last season’s backup, Quinton Baker, was removed from the team for rules violations. Sanford said at his Wednesday Bowling Green Rotary Club appearance that the running back position was still fluid.

“Ferby’s played himself into a role,” Sanford said. “He definitely is going to have a role. The running back job is going to really come come down to when the opportunities are given, who is able to give us something more than just the play was blocked for.”

On the defensive side of the ball, WKU will have to deal with the loss of star linebacker Joel Iyiegbuniwe, who was taken in the fourth round of the NFL Draft by the Chicago Bears. The team will attempt to fill the gap in part with Kentucky transfer Eli Brown.

Brown and the other linebackers will be backed up by a secondary that will be a key element of a defense facing several talented quarterbacks this year, including last season’s C-USA Player of the Year in Marshall’s Mason Fine and Middle Tennessee’s Brent Stockstill. Redshirt senior cornerback DeAndre Farris was recently named a captain and said at media day that he had lofty goals for the upcoming season.

Sanford said during Friday’s press conference that he was especially counting on the defense this season, with uncertainty at many offensive positions, but that he expects the team to surprise many who are counting them out this season.

The Hilltoppers will certainly need both sides of the ball to step up as they stare down a tough schedule that includes Wisconsin, former Hilltopper head coach Bobby Petrino at Lousiville, MTSU and Marshall.

The Hilltoppers also don’t get the friendliest home/away breaks this year, as they have to play some of their toughest conference opponents on the road, including MTSU, Florida Atlantic and Louisiana Tech.

The season gets underway at 8 p.m. Friday against Wisconsin at Camp Randall Stadium.