Sanford promotes ‘we over me’ mindset as fall camp kicks off 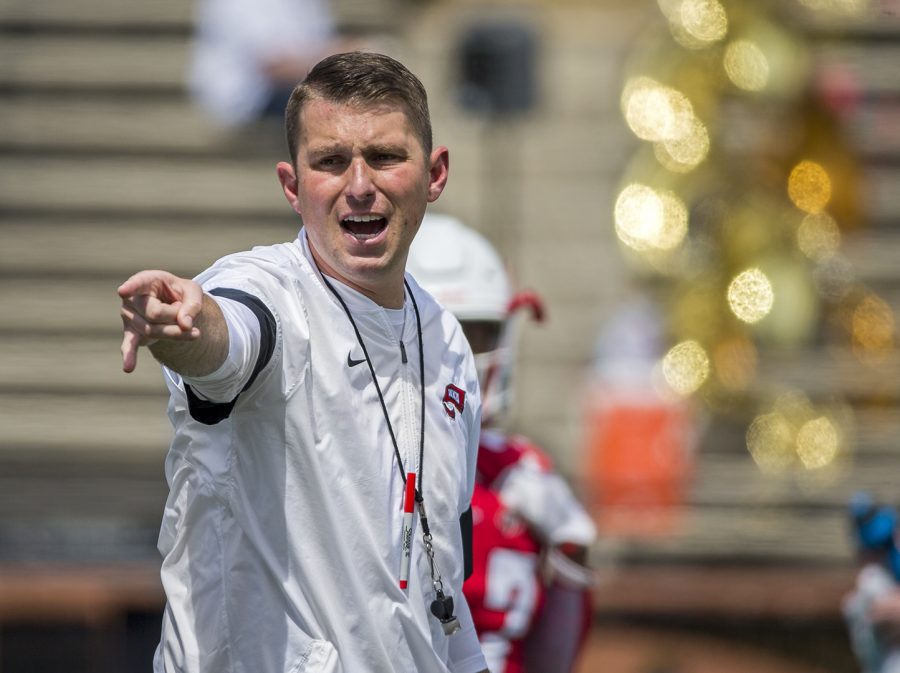 WKU head football head coach Mike Sanford calls instructions to players as they warm up before the Red vs. White game in Houchens-Smith Stadium on Saturday, April 21. “This is just the beginning of our journey,” Sanford said after the game.

WKU started fall camp for the 2018 season on Thursday, and second-year head coach Mike Sanford has a focus on a team-first mentality this season.

“The theme for this year is that it’s all about us, it’s about we,” Sanford said. “No matter what happens, the good times, the bad times, the unbelievably good times, that we stay tight … I want to see a unified football team. Offense, defense and special teams all unified within those units. Coaches, players all playing together.”

Sanford is coming off his first season as WKU’s head coach. He and the Hilltoppers finished 6-7 in 2017, good for third in the Conference USA East Division. The season ended with a loss to Georgia State in the Cure Bowl.

Sanford will be going into the season with a new quarterback to replace Mike White. Redshirt senior Drew Eckels, who will be the starter Week 1 against Wisconsin, said that he’s been putting in work this fall camp.

“Just learn,” Eckels said of what he wanted to gain from this fall camp. “Be a gym rat, be a film rat. I’ve just got to learn more because no matter how much you think you know, there’s always stuff that you don’t”

Eckels also spoke about the need for unity on the team, saying that he was happy with the way the team has come together thus far.

“Big we, little me,” Eckels said. “Caring more about the team than personal stats, caring about yourself. I feel like our team is really going to rely heavily on what we as a team are going to do during the season.”

One of Eckels’ receivers, redshirt sophomore Xavier Lane, was thrilled to be back practicing for fall camp.

“Been a long summer,” Lane said. “I feel like as a team we’ve done great, we’re moving with progress and just being back on the field with these guys is a blessing.”

Lane played in 11 games in 2017, recording 27 catches for 336 yards. In 2018 he’ll have a new quarterback, and he said the wide receivers have been working hard with Eckels.

“Summer time that’s all we’ve been doing,” Lane said. “Throwing the ball, we have good chemistry with the quarterback and as long as we just communicate, talk, keep working hard, practicing, everything will be well.”

Speaking on Sanford’s team-first mentality, Lane said the Hilltoppers are focused on succeeding together.

“At the end of the day, we know we’re one team, we’re not going to hurt each other,” Lane said. “It’s a brotherhood. We just need one team.”

For the Hilltopper defense, sophomore cornerback Roger Cray said that he felt the chemistry was looking good.

“I feel like we all come together,” Cray said. “Especially on the defensive side of the ball, We all came together and we want to play as a team.”

Cray also had a clear set of goals for the defensive unit, which were echoed by redshirt sophomore defensive back Devon Key, who also said that he was happy to be back on the field after a shoulder injury kept him out of spring practice.

“We’re trying to be top 15 in the country in all categories,” Key said. “Hopefully have more turnovers than last year.”

Key is the leader in tackles among returning players, as he racked up 94 total tackles last season.

The Hilltoppers have less than one month left before the first game of the season in Madison, Wisconsin, on Aug. 31.