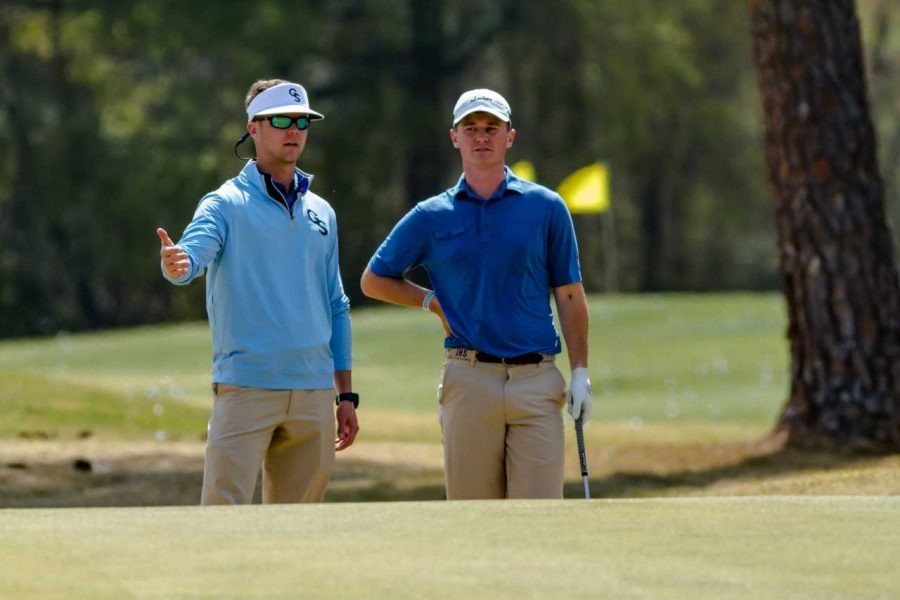 Chan Metts (left) talks with one of his former players as an assistant at Georgia Southern.

WKU has announced its replacement for the late Phillip Hatchett, as Chan Metts has been named the new head coach of the WKU men’s golf team, the school announced Monday.

Metts was previously an assistant at Georgia Southern. He comes to the Hill following the death of the former head coach Hatchett after he was struck by a car while riding his bicycle in June.

“When we initiated our search, it was imperative we find someone to carry on the outstanding legacy of Phillip Hatchett,” athletics director Todd Stewart said in a press release. “This required hiring an individual that was an excellent coach and mentor to players as well as having a proven record of professional development on and off the golf course. We have found that person in Chan Metts.”

Metts played golf at the collegiate level at Georgia College and State University, joining the team as a walk-on in 2005 and earning a scholarship his senior year.

He started his coaching career as a graduate assistant at the University of Sioux Falls for the 2015-16 season. That was followed by his two-year stint at Georgia Southern.

“I am extremely excited to join the Western Kentucky University family,” Metts said in a press release. “I would like to thank Todd Stewart and Jim Clark for believing in me and giving me this opportunity to become the next head golf coach at WKU.”

The 34-year-old Metts takes control of a team that will return every player except Bryant Evans. His team will be led by Billy Tom Sergeant, who is one of just two WKU players to ever compete in an NCAA Regional as an individual.