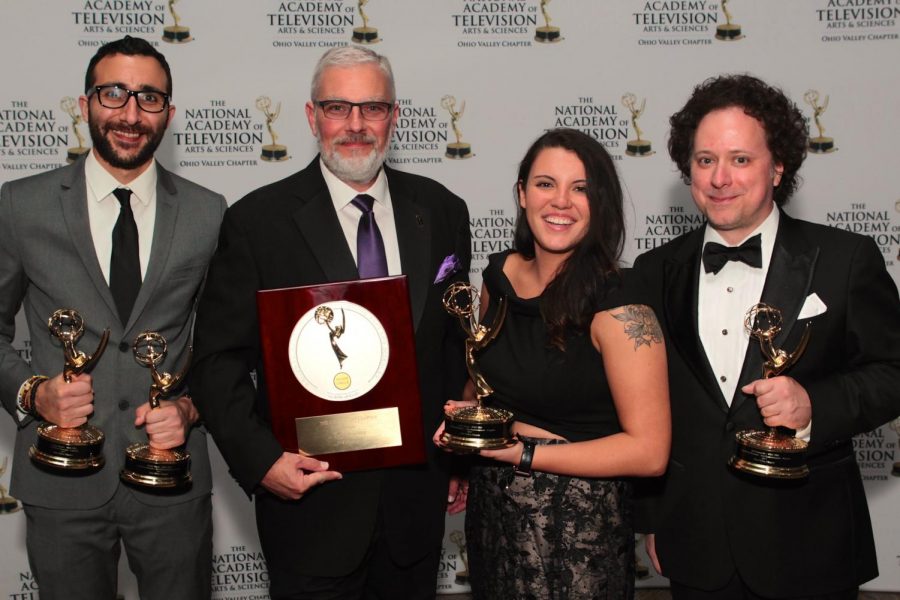 The sound of rustling leaves is heard as the sun begins to set on the Downing Museum in Bowling Green. Behind the museum is the Baker Arboretum, where a young woman named Becca Richardson stands on a decorated patio beside a keyboard player. Richardson begins to play her guitar, singing her song “Wanted” into a microphone.

This performance is from one of the episodes of the series Lost River Sessions, which helped WKU Public Broadcasting Service (PBS) win two Emmy Awards at the 54th annual Ohio Valley Emmy Awards.

The ceremony took place Aug. 18 in Lawrenceburg, Indiana, and recognized the winners of the Ohio Valley chapter of the National Academy of Television Arts and Sciences (NATAS), which is comprised of Kentucky, Ohio, Indiana and West Virginia.

“I felt good about the work that we had done,” Barati said. “I had a lot of guarded optimism. It’s a very difficult award to win.”

David Brinkley, director of educational telecommunications and WKU’s staff regent, said that there were 907 entries submitted to the Ohio Valley chapter of NATAS for the Emmy Awards. Brinkley has been the chapter president for three years and has been involved with the chapter since 2007.

Although Brinkley is the chapter president, he said he was not involved in deciding the award nominations or winners because they are decided by peer groups around the country.

Brinkley said that winning in the overall category shows a collective effort from all of the students involved with the show, and he emphasized how difficult it was to win in that category.

“What they have accomplished as a team two years in a row is amazing,” Brinkley said.

The series began in 2014 and has run for three seasons. It focuses on musicians around the region from the folk, bluegrass and Americana genres. Every episode takes place in a different venue.

“We wanted to try to have that intimate moment with the performers,” Barati said regarding the performances filmed for the show.

Brinkley said about 10-15 students help work on the show every week. He said it helps them gain experience in the film and television industry before they graduate.

“I think that is in part what sets WKU apart in the student experience,” Brinkley said, regarding students working on the show.

Brinkley was also honored at the Ohio Valley Emmy Awards by being one of two new inductees into the NATAS’ Silver Circle.

The Silver Circle recognizes television professionals who have performed distinguished service within the television industry for at least 25 years, according to NATAS. The second inductee was John Boel, a news anchor for WAVE-TV in Louisville.

Brinkley started working at WKU in 1998, but he initially came to the university in 1995 to work for Kentucky Educational Television. He has received 12 Emmy awards.

Barati, who graduated from WKU in 2007, said he was one of Brinkley’s former students and was happy to see his coworker and former professor receive the induction.

“To see him get that achievement was huge for me,” Barati said, regarding Brinkley. “It’s important that we continue the tradition of what he did for me and a lot of other students.”