WKU’s Board of Regents discusses strategic plan at annual retreat 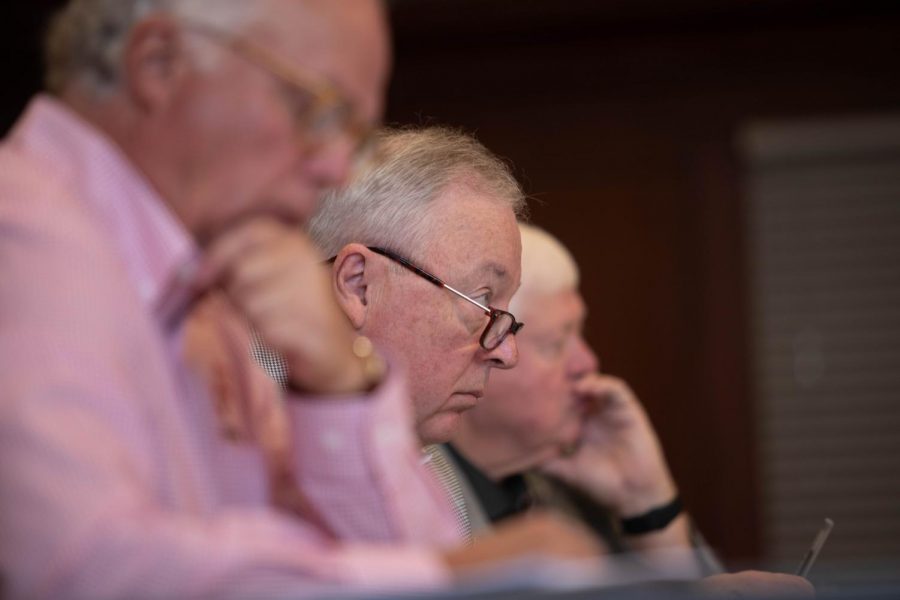 Gil Johnson, WKU Board of Regents vice chair, listens as the board discusses the strategic plan with President Timothy Caboni during the board's annual retreat on Thursday, Aug. 2.

The WKU Board of Regents discussed the university’s strategic plan and budget model during its annual retreat at the Downing Student Union on Thursday.

The strategic plan was created over the last year with six working groups meeting throughout the year, as previously reported by the Herald. The board will vote on the newest version of the strategic plan on Friday.

The draft of the plan focuses on three sections: the students, the university and the community. For every part, the plan provides goals, strategies and metrics, or ways of measuring the success of the goals with provides possible targets for 2027-28.

President Timothy Caboni, who spoke before the presentation, described the strategic plan as the university’s “roadmap” for the next decade. He said the plan shares the shared aspirations for WKU’s community, students, faculty, staff and alumni and he is “indebted” to those who helped create it.

“I’m looking forward to moving swiftly toward implementation of what I think is a remarkable community-centered inclusive process that created this plan,” Caboni said.

Bruce Schulte, WKU biology professor and one of two co-chairs of the strategic plan steering committee, gave a presentation to the board on the newest draft. He gave credit to Caboni for his energy and commitment in the planning process, which he said went from two-to-four years to only one year.

“Given the straits that the university was in at the time and the need for change moving forward, we decided, and really, this was the president’s decision, people decided that this needed to be a ramped-up, quick process, but also a thorough process,” Schulte said.

One component of the strategic plan that created discussion among the regents was the university’s planned shift toward centralized advising, or the “Comprised Advising Program” as it is referred to in the plan.

The centralized advising program focuses more on first-year and second-year students to improve retention. The program will “incorporate financial, mental, physical and social wellness,” according to the strategic plan.

“When appropriate (and by the junior year), generalist central advisors will transition their advisees to a specialized advisor with training and expertise in the offerings of a particular college, its academic programs, faculty and related career paths,” according to the description of the advising program in the strategic plan.

Faculty regent Claus Ernst asked if central advisors would be able to answer students’ questions for a specific major or department. He said that advising has usually been handled by professors within individual departments and colleges.

Schulte said centralized advising is more comprehensive and will not take professors out of the advising process. He said that the students can still be referred to professors if they have specific questions about their classes or majors.

Caboni said that centralized advising will eliminate the “run-around” for students because it will provided advising for schedules, classes, financial aid, dining and housing.

Student regent Stephen Mayer supported the centralized advising program in the plan because he said he liked how it will help focus on students’ financial, mental, physical and social wellness.

Mayer suggested assigning designated mentors to students for who they can talk to if they have questions. He said that his mentor, one of the biology professors at WKU, has helped him through college and he said he thought that other students could benefit from mentorship.

Staff regent David Brinkley also supported the centralized advising program because he said that it will help the students get better resources and help them understand who their advisers are.

During the retreat, the board also discussed a new budget model, which is referred to as the Resource Allocation, Management and Planning (RAMP) model.

“There were two things in the previous year that we wanted to do, or make significant progress on,” Caboni said, referring to the university’s strategic plan as the first thing. “The second is thinking about our budget model and how we need to evolve that to be more nimble and incentivize behaviors that we want to have as an institution.”

WKU is working with the Huron consulting group to create the new model. Huron offers management consulting in higher education, health care, life sciences and commercial industries, as previously reported by the Herald.

Andrew Laws from Huron presented the model to the board and a timeline of when the model planning stages will take place. The model started being developed in January 2018 and will be fully active around July 2019, according to Laws’ presentation.

The model was designed to be more flexible to priority changes at the university, be more driven by data and incentivize performance, entrepreneurship and innovation, according to the presentation. Examples of funding distributions for tuition and state appropriations were included in the presentation.

Undergraduate resident tuition, for example, would be divided into 75 percent and 25 percent. The 75 percent would be based on instructed resident undergraduate credit hours, or credit hours in the student’s specific college like the Potter College of Arts and Letters, as seen in the proposed budget model.

The 25 percent would be based on enrolled resident undergraduate credit hours, or credit hours in the student’s “school of record,” according to documents provided by Huron.

Ann Mead, senior vice president for finance and administration at WKU, said that the proposed model discussed by the board will probably look similar to the final version, and she said that the new budget model has not been finalized.