Barnett shines through despite rough start to Lady Toppers’ season 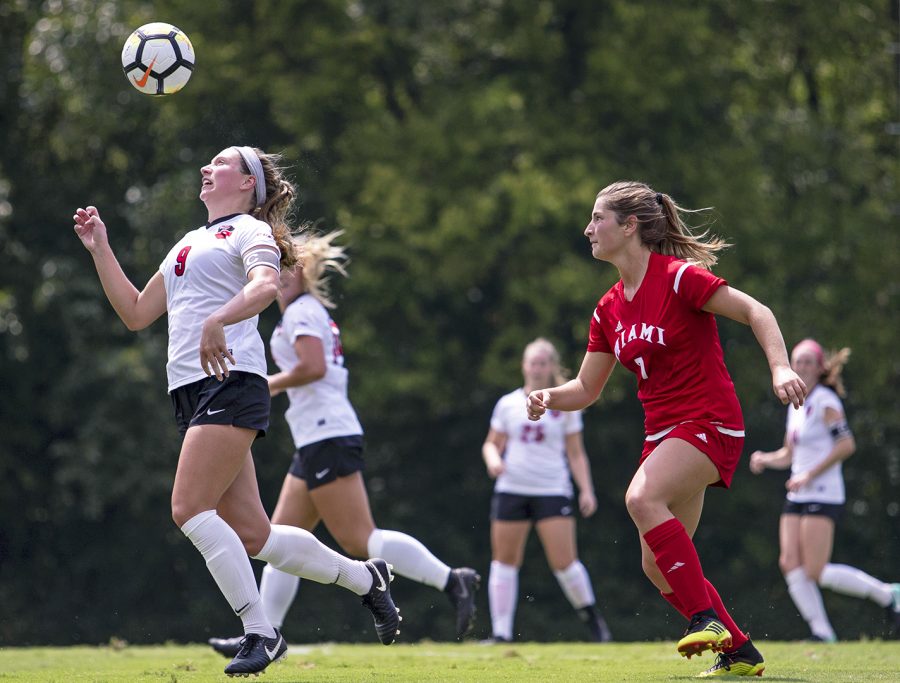 On Sunday August 26. The WKU women soccer team play their first game of the season against Miami, Ohio.

WKU soccer held its first home game of the season Sunday after the Lady Toppers spent three weeks on the road to open the season.

WKU had three exhibition matches before the regular season started, with the first being a 1-1 draw at Austin Peay Aug. 4. The Lady Toppers then dropped a home match to St. Louis 2-1 Aug. 10 before winning their final scrimmage 3-2 at home against Belmont.

Witt started in net for the Lady Toppers’ next game, a 4-0 loss at Ole Miss Aug. 19. Witt had four saves in the game, but the Rebels had eight shots on goal. The Lady Toppers failed to get a single shot on goal in the match.

The offense came to life for WKU in the next game, as the Lady Toppers got their first win of the season with a 4-1 victory in Evansville. Junior defender Aleksandra Kozovic netted the first goal of the season for the Lady Toppers, and senior midfielder Sarah Gorham added another goal in the first half to give WKU a 2-0 lead after 45 minutes.

Freshman midfielder Ambere Barnett stole the show in the second half, scoring two goals within three minutes of each other to give the Lady Toppers their third and fourth goals of the night.

“Ambere’s a fantastic talent,” head coach Jason Neidell said. “She’s been in the lineup since day one. She’s a player, she’s a competitor, and we’re lucky to have her.”

On Sunday, the Lady Toppers hosted Miami (Ohio) for their home opener. Barnett struck again for WKU, this time in the 24th minute to give the Lady Toppers 1-0 lead. The goal was Barnett’s third in two games. The freshman took a team-high seven shots in the game.

“I feel like I’m getting really close to the team,” Barnett said. “We’re just doing our best to score goals, and I’m just happy I’ve gotten the opportunity to score them.”

The Lady Toppers gave up a goal in the second half and ultimately pulled out a draw in the game after two scoreless overtimes, putting WKU’s regular season record at 1-2-1 after its first four games.

“Last season we always seemed like we were coming from a goal down,” Neidell said. “We came out sluggish in the second half and it cost us.”

Barnett emphasized that the team needs to work on finishing games, saying, “We need to come out in the second half hard and not play like the game is done.”

Looking forward, the Lady Toppers play their next two games at the WKU Soccer Complex. WKU hosts Lipscomb at 6 p.m. Friday and then takes on Kentucky Christian at 6 p.m. Monday before traveling to Nashville for a matchup with Vanderbilt next Thursday.