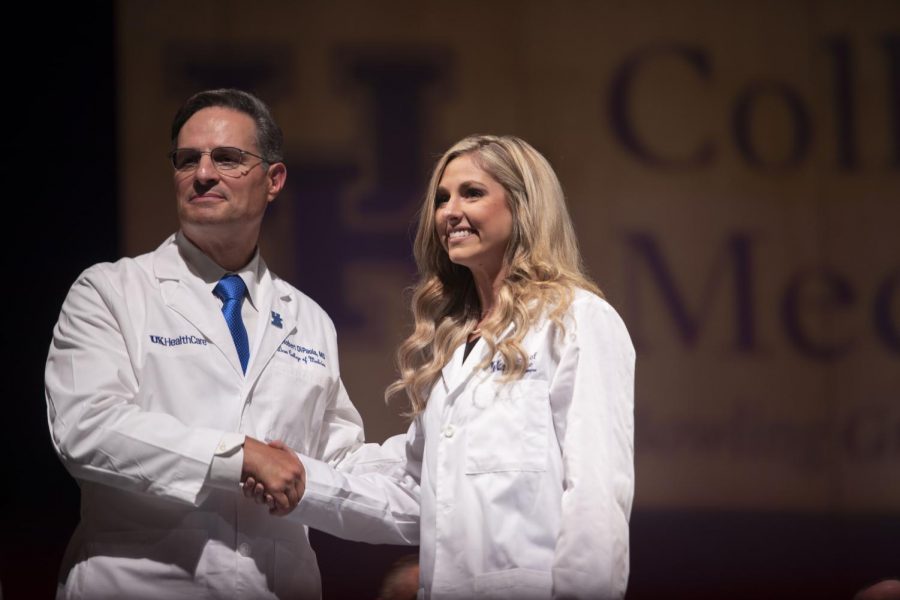 One female student from the inaugural class of the UK College of Medicine Bowling Green campus smiles for a photo on the stage of Van Meter Hall after putting on her white coat. The medical school's first white coat ceremony took place at Van Meter Hall on Friday.

The 30 medical school students from the UK College of Medicine Bowling Green campus were all smiles on Friday as they stood upon the Van Meter Hall stage and put on their white coats, which signified the next four years of their lives.

The medical school, which was a collaboration between UK and WKU, held the white coat ceremony to welcome its inaugural class, after a week-long orientation.

About 200 people attended, including many of the students’ friends and family members. Some of the attendees cheered for the students, while others pulled out their phones to take photos and videos of their family members at the ceremony.

J.K. Phillips, from the UK Medical Alumni Association, greeted the attendees at the ceremony. He told the students that their white coats distinguish them as students of the UK College of Medicine and he gave them advice as they transitioned into medical school.

“If you enjoy being challenged, you’ve come to the right place,” Phillips said. “Enjoy this day with your family and friends because life is about to change fast.”

Mark Newman, executive vice president for health affairs at UK Healthcare, gave the second address at the ceremony and spoke about his hopes for the students as they started medical school at the new facility at Bowling Green.

Robert DiPaola, dean of the UK College of Medicine and keynote speaker for the ceremony, emphasized how the white coat ceremony marked the start of a new chapter in the students’ lives.

“You’re about to begin a path, a path to commitment, a path of education, a path of discovery and service,” DiPaola said. “As you train and begin to practice medicine, you will see the things that we can do better. You will see the opportunities to make a difference.”

Connie Smith, CEO of Med Center Health, and President Timothy Caboni also spoke at the ceremony. Smith said that Med Center Health will support the students through their four years at medical school.

Caboni reminded the audience how the dream of a medical school in the Bowling Green area has existed for many years. At a time when rural areas struggle to find doctors, he expressed how important physicians were to the region around Bowling Green and in the state of Kentucky.

“Without a physician in the town, that town does not stay viable,” Caboni said.

Don Brown, assistant dean of the UK College of Medicine Bowling Green campus, said that UK built the new medical school in Bowling Green to address a lack of physicians in the state and to provide local medical training for students who may not be able to attend other UK regional medical campuses, as previously reported by the Herald.

The UK College of Medicine Bowling Green campus is located in the Medical Center at Bowling Green. Classes at the new facility start Aug. 6.

“I’ve been waiting for this since high school,” Citak said with a big smile. “I’m so excited.”