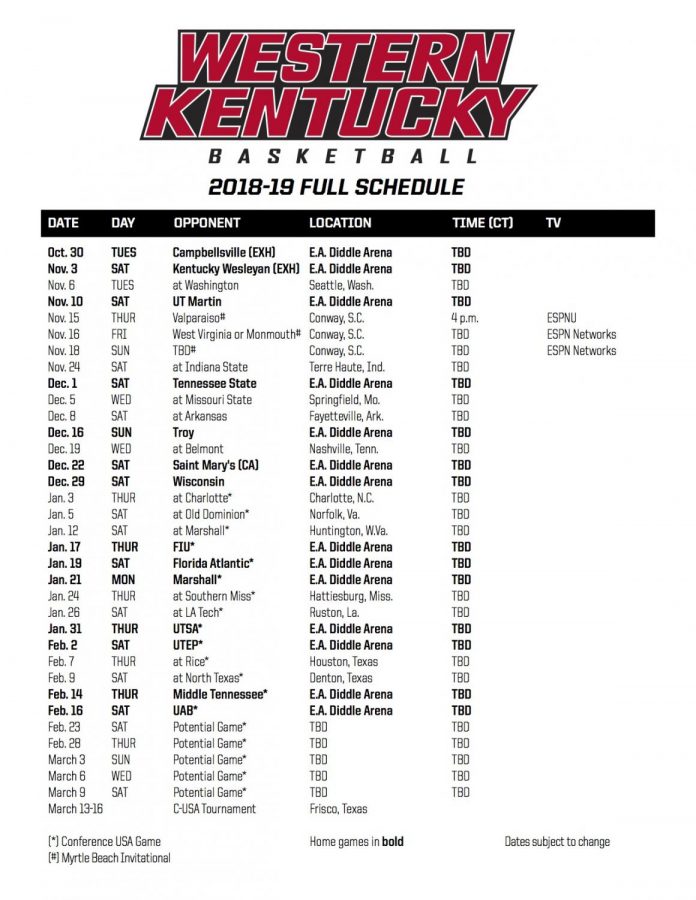 WKU basketball has released its full 34-game schedule for the 2018-19 season, a schedule that features five potential Power 5 opponents and 14 home games.

“We have a very exciting, challenging opportunity,” head coach Rick Stansbury said in a press release. “We’re playing in some great venues against some very good teams, along with some fantastic games here at home in Diddle Arena. I like the challenge of our schedule. It can only make our team better.”

WKU will also compete in the Myrtle Beach Invitational. In this tournament, the Hilltoppers will open with Valparaiso, then play either Monmouth or West Virginia. The third game is to be decided, depending on WKU’s results in the first two matchups. WVU would allow WKU a chance to go up against one of the deepest frontcourts in America, headlined by potential All-American Sagaba Konate. This will put the Hilltoppers in front of a national audience, as the game against Valparaiso will be on ESPNU, and every game in the event will be aired on the ESPN networks.

WKU will open up regular season play on the road. The Hilltoppers will travel across the country to Seattle to face Washington. The Huskies made the NIT last season, but return nearly every player. Forward Noah Dickerson and guard Jaylen Norwell headline the Huskies’ star players.

WKU will also travel to Fayetteville, Arkansas, to face Arkansas in the start of a home-and-home series. Arkansas made the NCAA Tournament last year, but lost star guards Daryl Macon and Jaylen Barford.

WKU will also travel to Belmont and Missouri State, looking to avenge the losses they took from each team a season ago.

WKU opens up conference play on Jan. 3 at Charlotte. The Hilltoppers have three consecutive road games before hosting Florida International for the first home game of the C-USA slate. WKU will host key games against Marshall on Jan. 21 and Middle Tennessee on Feb. 14.

The conference tournament is in Frisco, Texas, from March 13-16.

The full schedule can be seen below.