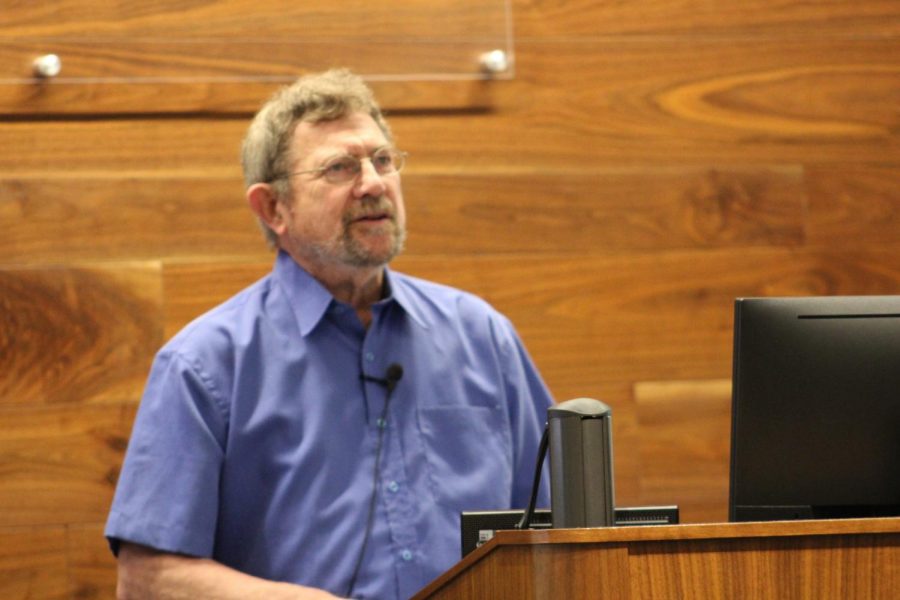 J. Michael Kosterlitz, 2016 Nobel Laureate in Physics, speaks about his career and his research in topology at the 33rd Summer Conference on Topology and its Applications in the Ogden College Hall auditorium on Tuesday, July 17.

J. Michael Kosterlitz, 2016 Nobel Laureate in Physics, spoke about his career and his Nobel Prize win at WKU on Tuesday.

Kosterlitz, who is now a physics professor at Brown University, was the keynote speaker for the 33rd annual Summer Conference on Topology and its Applications. In his lecture, called “A random walk through physics to the Nobel Prize,” Kosterlitz detailed his career in physics and talked about his work in the topology of phase transitions.

Kosterlitz received the 2016 Nobel Prize in physics with British physicists David Thouless and Duncan Haldane. They won the award for their research on topological defects and phase transitions in two dimensions.

During his presentation, Kosterlitz said that he did not expect to win the award in 2016 because his research with Thouless and Haldane had been completed in the 1970s. He said he found out about his win over the phone and said that he was speechless for a few seconds.

“When this phone call came, I was so astonished,” Kosterlitz said.

Kosterlitz said that after he decided to work at the University of Birmingham around the 1960s, he met Thouless and was introduced to the theory that would lead his award-winning research.

“In hindsight, Birmingham University was the best decision I could have made,” Kosterlitz said.

Kosterlitz’s presentation took place in the Ogden College Hall auditorium with about 50 people in attendance. One of those in attendance was David Lee, provost and vice president of academic affairs at WKU, who had opened the presentation.

Lee said he found it interesting that Kosterlitz received the Nobel Prize 40 years after the completion of his research. He said he also enjoyed learning about the collaborative efforts between Kosterlitz, Thouless and Haldane to complete their research.

“It is highly unusual that we have a Nobel Laureate speak here on campus,” Lee said. “I found the story of his career to be really intriguing.”