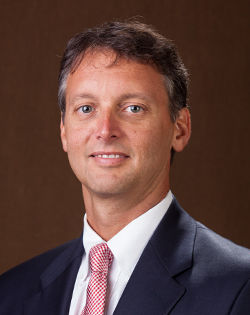 Jason Crandall (shown), associate professor in exercise science and kinesiology, started working on a research project with Matthew Shake, associate professor for psychological sciences, in 2013 with an interest in improving the mental and physical health of older adults.

Two WKU faculty members plan to break down the barriers of exercise for older adults with a new nationally recognized research project.

Jason Crandall, associate professor in exercise science and kinesiology, and Matthew Shake, associate professor for psychological sciences, started working on a research project together in 2013 with an interest in improving the mental and physical health of older adults, particularly those in senior living facilities and senior centers.

“The evidence is that exercise is the best way improve areas of cognition that are affected with age,” Shake said, referring to “areas of cognition” as memory and balance. “We want to help older adults maintain their independence for as long as they can.”

Their research project features the use of an app called “Bingocize,” a health promotion program created by Crandall in 2011 that is designed to be used for senior living facilities.

The app, which combines bingo with exercise, is played on tablets at senior centers and allows adults to play bingo while doing physical activities and learning information about health education in a social setting. The program is designed to help reduce falls and engage older adults dealing with chronic physical and mental conditions, according to its webpage.

The program requires training before it can be used and the training takes about 30 to 45 minutes. Crandall said that it has been implemented across the United States and is now being tested in England, Crandall said.

Their research project received national attention on Wednesday when the professors were awarded a competitive research grant by the National Institute on Aging at the U.S. Department of Health and Human Services, according to WKU.

The grant, which totaled at $417,398, will be used to fund a clinical trial for their research project. The first part of the trial will start in two or three weeks and will last for 14 weeks, Shake said.

For the trial, Crandall, Shake and about nine WKU students will visit four senior centers around Kentucky and Tennessee. The students will work with about 40-50 older adults, conducting mental and physical tests and having the adults complete questionnaires. The adults will play Bingocize and learn about exercise and health education in four different variable groups.

Shake pointed to poor health in Kentucky as one of the main reasons why they decided to conduct this project.

In 2016, Alzheimer’s disease was the sixth leading cause of death in Kentucky, resulting in 1,726 deaths, according to the Center for Disease Control.

Shake said the entire project is designed to help older adults break down barriers with exercise. Some of the barriers include assumptions that exercise is unenjoyable, painful and socially isolating. These barriers can cause older adults to not gain recommended exercise and nutrition, which can lead to suffering falls and injuries, he said.

“We want to remove those barriers and allow these older people to engage in physical activity,” Shake said.

Crandall said he and Shake applied for the federal grant about 18 months earlier. He said they found out about receiving the award two months ago but were only able to share the news when they received the award letter.

“It was kind of surreal,” Crandall said. “For about ten seconds, we were ecstatic. It’s very hard to get one of these [grants].”

Crandall said he has received about $1.6 million in total grants to fund their project and their online program. Other grants he received earlier included two United States Center for Medicare Services Civil Money Penalty Grants in 2017 and 2018 for about $773,000 and $216,000 and a Retirement Research Foundation Grant in 2015 for about $95,000, according to WKU.

For the students, Shake said they will be able to get volunteer hours or credit hours for participating in the project, but they will gain practical experience most of all.

“We couldn’t be able to do the clinical trial without the students,” Shake said. “For them to get that practical experience, that’s one of the best parts for us.”

Crandall said that with the excitement of receiving the grant came the realization of the work they needed to do to complete the project.

“Of course, we’re excited, but we also know that this is going to be a lot of work,” Crandall said.