Vice provost Richard Miller reflects on his career of 43 years 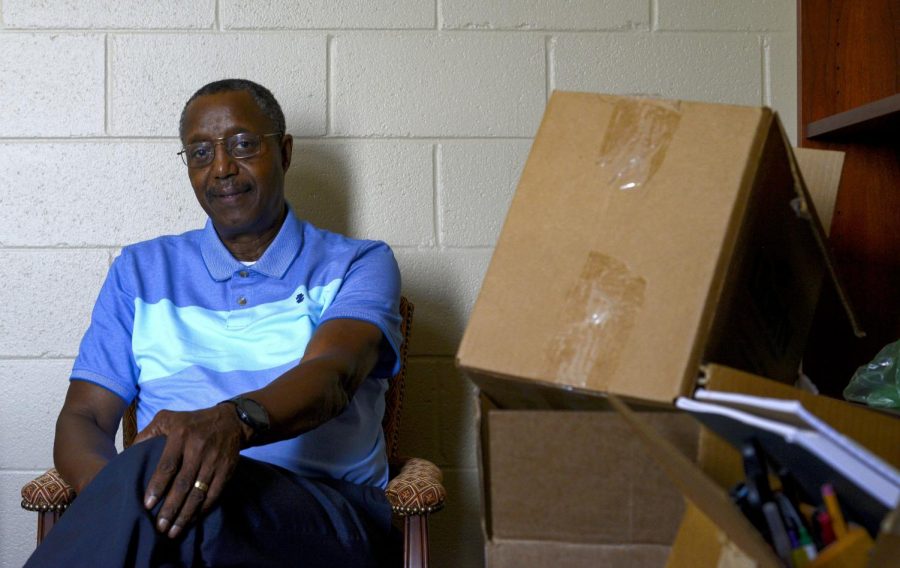 Searching through a small pile of Amazon Prime cardboard boxes in his office, former vice provost Richard Miller, 70, found two framed black-and-white photographs that he had carried with him for more than 40 years of his life.

One photograph depicted Miller as an aspiring athlete attending Ithaca College and the other showed him as a smiling minor-league baseball player around 1969.

Looking at the pictures, Miller remembered another keepsake that he had not yet packed. As he picked up his customized Louisville Slugger and gave it a little swing, he remembered the young baseball fans who stared in awe of him and his fellow players during practices.

“I realized how important it was for us to conduct ourselves in an exemplary fashion because of how kids idolized us as baseball players,” Miller said.

Miller had started packing his office in the Wetherby Administration Building, transitioning away from 12 years as WKU’s vice provost for policies and personnel. He will return in the fall as a faculty member and will officially retire from WKU in December.

Miller’s 43-year career in university administration began more than 11 hours north from WKU in Ithaca, a predominantly-white college town in upstate New York. Growing up in a family of four, Miller’s father worked in appliance repairs, while his mother worked two jobs as a manuscript typist and as the secretary to the dean of the School of Electrical and Computer Engineering at Cornell University.

Growing up, Miller played three sports in high school—his favorite of which being baseball.

“I was very fortunate to be blessed with athletic ability,” Miller said, describing himself as an “all-American” baseball player.

After graduating high school, Miller received a scholarship to Ithaca College as a health and physical education major. He graduated in 1969 and was drafted into the San Francisco Giants as a third baseman.

“I have wanted to be a professional baseball player since I was 8 years old, so I was hopeful of a baseball career when I was drafted,” Miller said, saying he wanted to be like Jackie Robinson, his childhood hero.

However, two-and-a-half years after being drafted, a baseball injury to a tendon in his right knee changed his career path.

“When you get hurt in professional sports, you become a damaged asset,” Miller said, calling the injury “the kiss of death.”

Miller was told by a surgeon that there was no hope for surgery to repair his damaged knee, and he returned to school. He pursued his master’s degree in health and physical education at Ithaca College, his alma mater, in 1971 and he received his Ph.D. in exercise physiology from Springfield College in 1975.

“The question is when you fail, what is your mindset when you go up to the plate the second time?” Miller said. “You’re going to have setbacks but you have to overcome them.”

Miller said that keeping this philosophy in mind helped him throughout his academic career.

In 1975, Miller took an assistant professor position at Bowie State University in Maryland, a Historically Black College. Working there, he said he began to understand the value of being exposed to diverse ethnicities and races in a university setting by breaking down his own stereotypes about African-American people.

“I grew up in a predominantly white environment in upstate New York,” Miller said. “I hadn’t been around people of my own race as much as folks in Maryland. It was a learning experience for me. I learned a lot about my own race, ethnicity and culture.”

After two years at Bowie State, Miller became the health and physical education department head and worked in the position for 15 years.

Miller returned to Ithaca College in 1990 and served for 11 years as the founding dean of the School of Health Sciences and Human Performance. He then worked as the senior vice president of academic affairs at Benedict College in South Carolina.

In 2006, Miller became WKU’s vice provost for policies and personnel.

As vice provost, Miller was in charge of overseeing compliance with faculty personnel policies and procedures, overseeing hiring procedures for faculty and staff, validating faculty credentials and handling all faculty complaints.

Martha Sales, director of the Intercultural Student Engagement Center, met Miller after his first week working at WKU and started working with him when she worked under the Division of Academic Affairs.

Sales said that while working on her doctorate degree for educational leadership, she created a class on diversity and inclusion for a winter term and asked Miller to teach the class. Because she had not received the proper credentials to teach her class, she chose him to teach it because of his previous academic experience.

“Students loved him,” Sales said, describing him as a transparent professor who loves to tell stories. “He wasn’t guided by objectives. He was guided by a desire to help students learn.”

Sales said one of her fondest memories working with Miller was eating breakfast together at IHOP every two or three months. She said he was a “good sounding board” for her during stressful days because of his calm demeanor.

“He told me, ‘As long as you lead with integrity and you are able to sleep at night, you have been a good leader,’” Sales said, smiling, also saying he was her mentor and friend. “He leads with fairness and justice, and I know that no matter what, he’s still going to do the right thing.”

Around 2008, Miller was asked to additionally serve as the university’s first chief diversity officer by former president Gary Ransdell.

As the chief diversity officer, Miller was responsible for monitoring progress on issues that related to diversity, including requirements set by the Statewide Diversity Policy, which sought to enhance diversity in postsecondary education. He also established the university’s first plan for encouraging diversity.

“We become a more attractive university when the faculty and staff mimic the demographics,” Miller said. “We need to prepare students to enter a world that is diverse and ethnic.”

David Lee, provost and vice president of academic affairs, worked with Miller since his start in 2006 and said that being the chief diversity officer was one of Miller’s proudest achievements.

“He has a strong commitment to building diversity,” Lee said, referring to him as a “champion” for diversity.

Lee said that Miller was “beyond fair” in his position as vice provost, particularly with how he worked with complaints and disputes.

However, Miller’s plans were interrupted when the university experienced two rounds of budget cuts. Miller’s vice provost position was chosen to be eliminated during the first round, effective June 30, 2018.

“That was a disappointing thing, that I wasn’t going to have the opportunity to help the new provost,” Miller said.

During his transitional retirement, Miller will act as interim dean for the College of Education and Behavioral Sciences until July 31, 2018 and Corinne Murphy, current interim vice provost of West Chester University, will take over as the official dean on Aug. 1.

In the fall, Miller will return as a faculty member at WKU to teach kinesiology. He expressed his enthusiasm for working more with students and described himself as an old-fashioned professor.

“I enjoy students,” Miller said. “I think students give us vitality and keep us young.”

Miller finished packing his belongings in the Wetherby Administration Building and moved to his new office in the Houchens Industries-L. T. Smith Stadium. He said his experiences from working with sports and education during his 43-year career have been rewarding for him.

“There are always challenges, and believe me, we’ve had our fair share of challenges,” Miller said, referring to WKU. “But overall, for me, the reason why I wake up in the morning and look forward going to work is the people. Folks that I work with here at the office and deans and department heads, that’s the reason why I look forward to work every day.”

Miller said he looks forward to spending his retirement attending baseball games, travelling and spending time with his wife, Doris Miller, his two daughters and his four grandchildren.

“I’m not going to let any grass grow underneath my feet,” Miller said.

EDITOR’S NOTE: A previous version of this story had an incorrect name for Ithaca College’s School of Health Sciences and Human Performance.