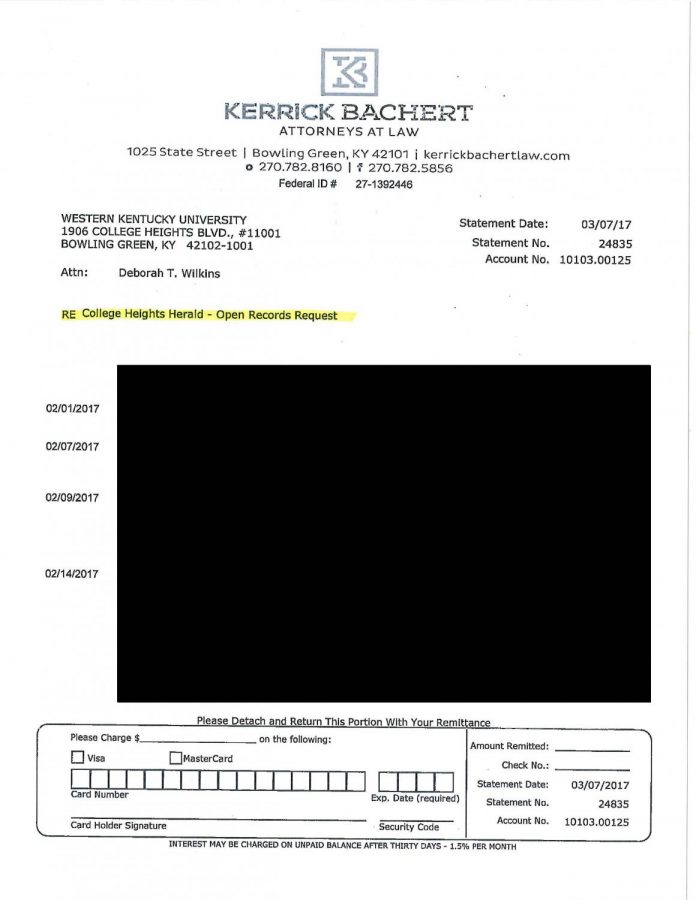 Through an open records request, Andrew Henderson, former Herald editor, requested “any payments, including amounts and services rendered, paid by WKU to the Kerrick Bachert law firm from Nov. 1, 2016 to [March 2, 2018]." On March 29, 2018, WKU provided copies of Henderson’s request, containing redacted information involving expenses paid from attorney billing records, hours worked by its attorneys and other “blanket redactions.” The black sections on the page are the redactions made by WKU in Henderson's initial request.

Kentucky Attorney General Andy Beshear’s office ruled on Monday that WKU was found in violation of Kentucky’s Open Records Act through its redaction of billing information for its attorneys working on the WKU vs. College Heights Herald lawsuit.

WKU sued the Herald in February 2017, after WKU denied an open records request by former Herald reporter Nicole Ares in November 2016 for records concerning sexual misconduct allegations against employees at the university. The lawsuit is ongoing.

According to the documents released by the Attorney General’s office, Beshear is currently an intervening party in an appeal regarding the WKU vs. College Heights Herald lawsuit.

Through an open records request on March 2, 2018, former Herald editor-in-chief Andrew Henderson requested “any payments, including amounts and services rendered, paid by WKU to the Kerrick Bachert law firm from Nov. 1, 2016 to [March 2, 2018],” according to Beshear’s ruling.

On March 29, 2018, WKU provided copies of Henderson’s request. Information involving expenses paid from attorney billing records and hours worked by its attorneys, were redacted, among other “blanket redactions.”

The university stated it “redacted information which discloses substantive information and/or matters protected by the attorney-client privilege,” according to the ruling.

“In summary, although WKU is permitted to redact substantive matters from attorney billing records as protected by the attorney-client privilege, leaving general descriptions of the work performed, it is not permitted to redact hours worked or fee information, or to engage in blanket redactions,” the Attorney General ruled. “In redacting hours spent and fees paid from attorney billing records, and in making blanket redactions, WKU violated the Open Records Act.”

Henderson said he decided to request the records because he was curious about how much the university was paying the attorneys from the Kerrick Bachert law firm upon the ongoing lawsuit between WKU and the Herald. He said he also thought that the public deserved to know the financial costs of WKU’s legal cases, considering the university’s budget shortfall.

According to the Attorney General’s ruling, one of the reasons that WKU did not release the requested information was “revealing the details of the invoices would not serve the public good.”

Henderson said he was “sickened” by the university’s reasoning for redacting the information.

“That should not be for any institution to decide,” Henderson said. “This shows that they don’t have the final say in transparency.”