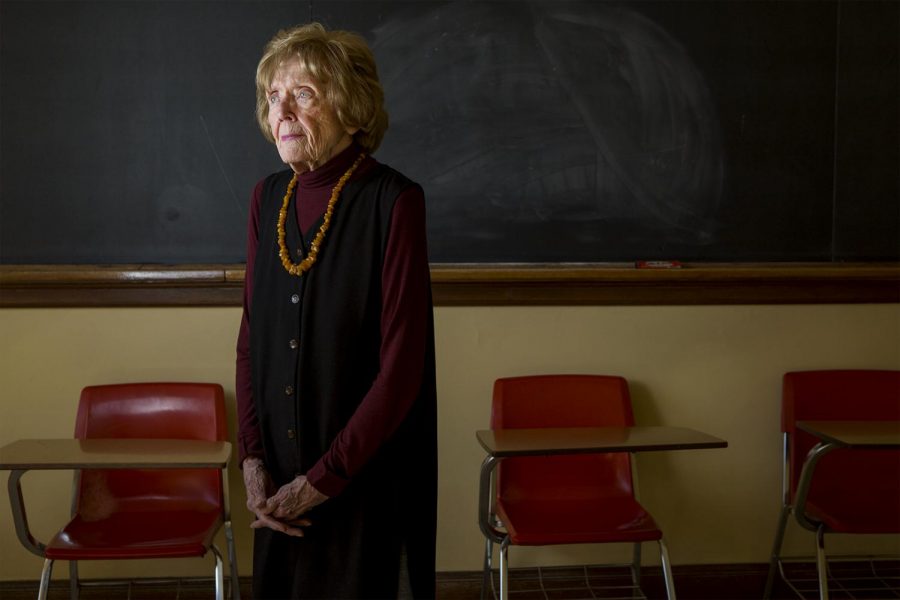 The funeral for WKU’s oldest and longest-serving professor, Mary Ellen Miller, took place at the J.C. Kirby & Son Lovers Lane Chapel on Friday, as a room filled with friends, colleagues and family members reminisced on memories they shared with her.

Provost David Lee led the service, and he shared memories from when he worked with Miller in Cherry Hall and as the former dean of the Potter College of Arts and Letters.

“Mary Ellen loved the arts in many forms, and she believed that some of the best art was created in our own backyards,” Lee said.

Several former friends and colleagues of Miller’s read poetry at her service, including Jane Olmsted, head of the diversity and community studies department. Olmsted read a poem she wrote involving email conversations she had with Miller.

Robert Hale, English department head at WKU, gave a speech at the service. He described his experiences with Miller during the last five years as department head, and he said his favorite memories with her were “snarking” and “sparring” back and forth in her office.

“I only knew Mary Ellen for five years, but it sure feels like 150,” Hale said in his speech. “I haven’t laughed with anyone as much as I’ve laughed with Mary Ellen Miller.”

Ruth Miller, Miller’s daughter, gave a speech and read a poem at her mother’s funeral service. She talked about how faithful and passionate her mother was throughout her life.

“My mother was the strongest person I have ever known,” Ruth Miller said, crying. “I implore you all to keep my mom in this world, not through mere memories but through deeds.”

Patti Minter, WKU history professor, worked with Miller in Cherry Hall and attended the funeral. She said that because Miller was the first female faculty regent at WKU and Minter was the second, Miller was a mentor and a friend to her.

“I had no bigger supporter and source of inspiration than Mary Ellen Miller,” Minter said. “I’m going to miss her terribly. It’s the end of an era.”

Miller died on Saturday, June 9, at 83 years old. She became WKU’s first Poet Laureate in 2017 and served in the English department for 54 years.