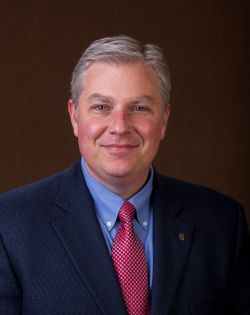 David Brinkley, director of educational telecommunications, will become the next staff regent at WKU, effective July 1. He won by three votes in a second "run-off" election for the position against Greg Hackbarth, director of the enterprise systems department. “I took stock in how I wanted to contribute to the university,” Brinkley said on his decision to run for the position. “I want to make the time count.”

David Brinkley, director of educational telecommunications, will become the next staff regent for WKU, after winning by three votes in a second “run-off” election.

Brinkley initially ran for the position against Greg Hackbarth, director of the enterprise systems department, and Robert Unseld, director of the Student Accessibility Resource Center. The first election took place on Thursday, June 14.

Because no single candidate received over 50 percent of the vote in the first election, a second election—referred to as a “run-off” election—took place between Brinkley and Hackbarth on Wednesday, June 20. Brinkley won by three votes, him receiving 218 votes and Hackbarth receiving 215 votes.

Brinkley has worked at the university for 20 years, since 1998. He said he initially came to WKU in 1995 to work for the Kentucky Educational Television.

“I’ve been at the university a long time,” Brinkley said. “I have seen how it has helped students, and I felt like it was an atmosphere I wanted to contribute to.”

As staff regent, Brinkley said he hopes to focus on how staff are directly involved with improving student retention and success. He said he also supports improving the benefits offered to staff members, like stable retirement, in order to improve staff retention and to recruit more staff members in the future.

“The staff have felt a lot of pressure,” Brinkley said, referring to the past year at WKU. “I want students and staff members to feel empowered, and I want to help rejuvenate their spirits.”

Brinkley said he wanted to break down silos between departments, and he emphasized how the next few years will be important for the university moving forward.

“We’ve got to work collaboratively,” Brinkley said. “It’s critical in how we move the university’s mission forward.”

In March 2018, Brinkley said he received a terminal diagnosis of head and neck cancer and was given 18 months to live. Although he said he will continue to fight the diagnosis, he decided to run for the staff regent position as a final way to give back to the university.

“I took stock in how I wanted to contribute to the university,” Brinkley said. “I want to make the time count.”