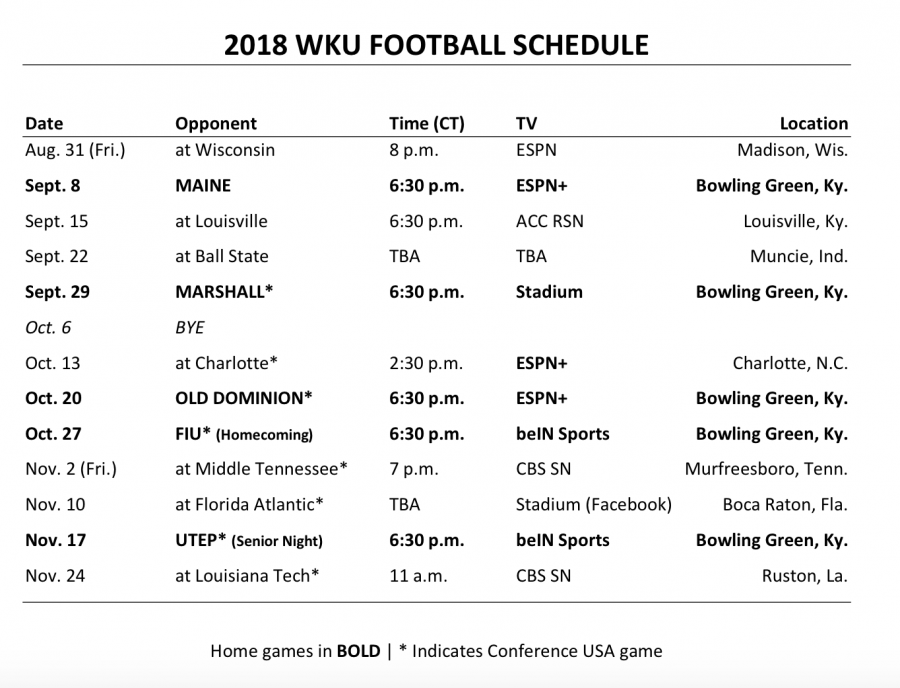 WKU fans and tailgaters can sleep in this football season. All five Hilltopper home football games in 2018 are set for evening kickoffs.

After becoming accustomed to waking up early for 11 a.m. games over the past few years, the Hilltoppers will host five 6:30 p.m. (CT) games this season, and 11 of WKU’s 12 regular season games will broadcast on national TV, according to a release from WKU.

On Thursday, Conference USA announced it had agreed to a multi-year contract with ESPN that includes the 2018-2019 season.

In addition to the 175 events that will be broadcast as part of the deal, ESPN will also broadcast first-round men’s and women’s basketball at the C-USA Basketball Championships in Frisco, Texas in March of 2019.

As for WKU, the Hilltoppers will appear on ESPN for their opening game at Wisconsin on Aug. 31, and then will have three regular season games shown on the new ESPN+ streaming channel.

The home opener against Maine on Sept. 8, an Oct. 13 contest at Charlotte and the following week’s home game with Old Dominion (Oct. 20) will air on ESPN+.
In Week 3, WKU travels to Louisville for a 6:30 p.m. (CT) intrastate matchup that will be aired on a regional ACC Network.
The C-USA opener vs Marshall at home on Sept. 29 will be broadcasted on Stadium, and a Nov. 10 date with reigning conference champions Florida Atlantic will be available for streaming on Facebook through Stadium.
WKU’s final two home games will be aired on beIn Sports. November road matchups with Middle Tennessee State (7 p.m. CT) and Louisiana Tech (11 a.m. CT) will be on CBS Sports Network.
ESPN is set to carry all of the six bowl games C-USA teams have a selection for, and the 2018 C-USA Championship game on Dec. 1 will be shown on CBS Sports Network.
Fans interested in watching the three Hilltopper football games on ESPN+ will have to pay a $4.99 monthly subscription fee. All content on ESPN+ is unavailable without subscription.
The new streaming channel streams hundreds of MLB, NHL and MLS games, Grand Slam tennis, Top Rank boxing, PGA Tour golf, college sports, international rugby, cricket and the full library of ESPN Films (including 30 for 30).
Delete Image
Align Left
Align Center
Align Right
Align Left
Align Center
Delete Heading