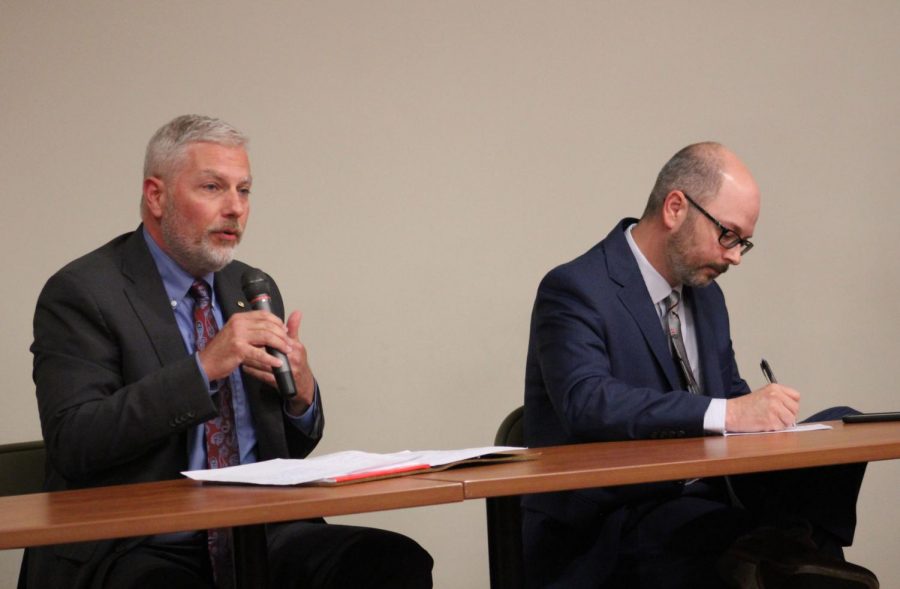 David Brinkley (left) answers a question during an open forum with the candidates for the staff regent position. The candidates included Brinkley, Greg Hackbarth (right) and Robert Unseld (not shown), and they talked their platforms and ideas about staff-related issues, including retention, retirement and leave policies.

Following the results of Thursday’s staff regent election, another “run-off” election will take place online for staff employees to vote between the top two candidates.

The first election for staff regent took place on Thursday, June 14, for all staff employees to vote between candidates Greg Hackbarth, David Brinkley and Robert Unseld.

After the first election, Mike Loftis, vice chair for the WKU Staff Council, announced in an email that Hackbarth received 38 percent of the vote (168 votes), Brinkley received 32 percent (141 votes) and Unseld received 30 percent (135 votes). A total of 444 votes were cast during the election.

Due to no candidate receiving more than 50 percent of the total vote, another election—referred to as a “run-off” election—will take place online between Hackbarth and Brinkley on June 20, 2018.

“Congratulations to all of the candidates,” Loftis said in the email.