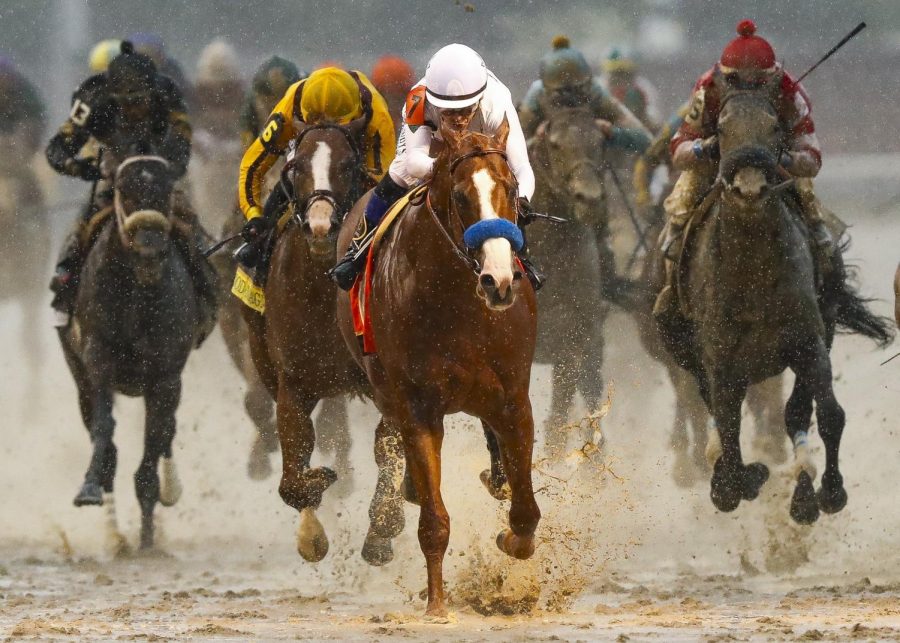 Justify with Mike Smith up, center, after winning the 144th running of the Kentucky Derby Saturday at Churchill Downs. Good Magic with Jose Ortiz up, left, finished second and Audible with Javier Castellano up finished third.

Justify remained undefeated by winning the Triple Crown at the Belmont Stakes on June 9, making history for himself and for WKU alumnus Mary Nixon.

Justify, a 3-year-old thoroughbred, stayed the leading horse throughout the 1.5-mile track, crossing the finish line with an unofficial time of 2 minutes and 28.18 seconds. He was the thirteenth horse in racing history to win the Triple Crown, Kentucky Derby and Preakness Stakes in the same year.

While other horses who have raced for the coveted title usually started racing at 2 years old, Justify began racing in February 2018 at 3 years old. He was the first horse since 1882 to win the Kentucky Derby after not racing as a 2-year-old.

Justify defeated 35 horses in total from all three of his races.

Bethany Wurl, marketing coordinator at WinStar Farm in Versailles, Kentucky, which is where Justify began his training, said there has always been something different in Justify, compared to other horses at the farm. WinStar Farm is one of four horse-racing farms that own Justify in a partnership with China Horse Club, Head of Plains Partners and Starlight Racing.

“We’ve never had a horse like him,” Wurl said before Justify raced in the Triple Crown. “He just glides through the air.”

Justify’s win also made history for WKU alumnus Mary Nixon. She became one of the first WKU alumni to be part of the ownership for a Triple Crown winner.

“We are over the moon,” Nixon said after Justify’s win. “It was a fabulous race.”

Nixon, of Lexington, and her husband Ted Nixon joined Starlight Racing in August 2017, not realizing that one of the horses they would invest in would end up winning the Kentucky Derby, Preakness Stakes and Triple Crown.

Nixon got involved with horses in junior high school, working part-time on a thoroughbred farm in Lexington. She put her love for horses aside, though, when she decided to attend WKU.

Nixon graduated from WKU in 1977 with an accounting degree, becoming a business executive in Louisville. She worked as the tax senior manager at EY in London, Kentucky, and she worked at PNC Bank. She was also the vice president of tax and internal audit at Yum! Brands, Inc. for 21 years.

In 2015, when she started thinking about retirement, she rekindled her interest in horses by joining StarLadies Racing, a racing interest group which consists of about 8-12 partners and five fillies. She later joined her husband as partners in Starlight Racing.

“To think that one of my horses would be Derby caliber, that was never a possibility,” Nixon said before Justify raced in the Triple Crown.

Nixon has been a supporter of WKU for many years.

In 1998, Nixon donated $500,000 to WKU for an accounting professorship called the Mary R. Nixon Professorship in Accounting. The state matched her donation through the Kentucky Regional University Excellence Trust Fund with $500,000.

“I have enormous affections for my alma mater, and a lot of great things have happened from my experience at WKU,” Nixon said. “It just makes me that much prouder of being a WKU alumni.”