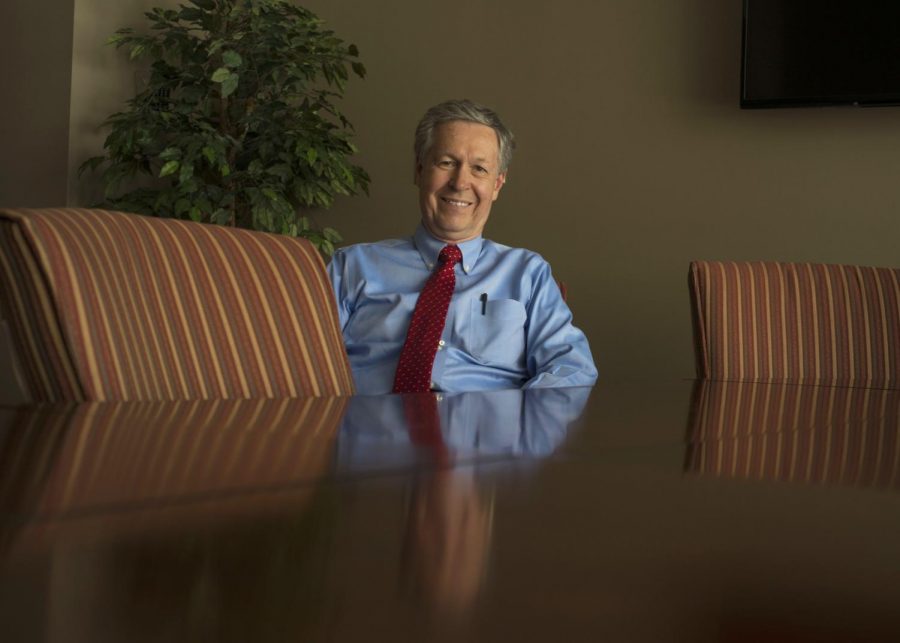 Provost David Lee, 69, has dedicated 43 years at WKU since starting as an assistant history professor in 1975. Lee will be retiring after completing his third year as provost and vice president of academic affairs, and he will serve the university as its first official historian. “I would like to create a well-rounded picture of the university,” Lee said, saying he feels like a history professor recast as provost. “We are in the process of becoming a different kind of university. The next stage of history will be challenging, but it is heavy with potential.”

Tim Broekema, WKU photojournalism professor and WKU alumnus, remembered sitting in his first history course as a second-semester freshman in 1984. He remembered the impact that the course had on him and the professor pushing his daughter’s stroller during his 8 a.m. class.

“I loved the way he told stories,” Broekema said about the professor. “I fell in love with history, with how history and photojournalism connect and with what he provided as a history professor. He taught me passion.”

That professor would later go on to become WKU’s provost and vice president of academic affairs, David Lee.

Lee, 69, decided to come to WKU during the summer of 1975, when a faculty member opening became available. Lee moved from West Chester, Ohio, to Bowling Green, Kentucky, after completing his Ph.D. at Ohio State University. He joined WKU as an aspiring assistant history professor to teach American and Russian history courses.

“I had been aware of Western for a long time,” Lee said. “I had always thought that it would be a good place to land, and I was pleasantly surprised when the opportunity came along.”

Lee has held a variety of positions in his 43 years at WKU, including assistant history professor, associate dean and dean of the Potter College of Arts and Letters from 1992 to 2015.

Lee assumed the position of provost and vice president of academic affairs on Aug. 24, 2015, at the request of former WKU president Gary Ransdell. Ransdell offered the position to Lee following former provost Gordon Emslie’s decision to step down and return to teaching.

“I never thought it would be a walk in the park, but I feel a strong sense of responsibility,” Lee said, reflecting on his decision to become provost.

Lee took the role of provost with a goal to serve for two years.

“I took it more on the assumption that I would be a transitional figure,” Lee said.

However, he did not expect Ransdell to announce his retirement, which went effective on June 30, 2017. Ransdell’s successor was President Timothy Caboni, who asked Lee to stay on as provost during his transition year.

“His manner, which is gentle and sometimes gentile, is something I’ve really appreciated,” Caboni said. “He’s provided to me…terrific advice, support and counsel, but also has just been a wonderful colleague in providing great assistance as we’ve moved through this year.”

Lee’s three years as provost have been faced with some financial challenges and controversies at the university, which included the elimination of 120 positions, both filled and vacant, in order to address $15 million of the university’s total deficit.

“The hardest part has been the personal dimension, the people we’ve had to let go, reassign [and] for individuals we’ve had to talk to,” Lee said, describing the period as “painful.”

Although the budget cuts and position eliminations were highly controversial, Lee said that he and Caboni chose to take a more “direct strategy.”

“Even though he was in the twilight of his career, he persisted through what was a grueling and incredibly difficult set of decisions that had to be made for us to get to the place where we are,” Caboni said. “I’ll be forever thankful for that, too.”

Another controversial decision Lee made during his time as provost was approving a resolution that would allow students to count two years of foreign language study in high school as their modern language requirement.

Although the third year he has served as provost has become one of the most difficult years of his tenure, he said he has not regretted making the decision to stay.

“People don’t have to like you, but they should understand your intentions,” Lee said, describing himself as having an academic temperament and being “low-key.”

Robert Dietle, WKU history department head and interim head of the School of Journalism and Broadcasting, described Lee as a “steady presence” in the workplace.

Dietle has worked with Lee both as provost and as dean since he began in 1991. At that time, Lee was the associate dean of the Potter College of Arts and Letters.

“He’s genuinely interested in what the faculty in any department are researching and what they are engaged in, and I think that genuine curiosity and interest has really helped him a lot in forming good relationships with the faculty,” Dietle said.

Broekema has also known Lee as a professor, dean and provost. Lee interviewed him when he applied to become a photojournalism professor at WKU in 2001.

While Lee has been provost, he said he has attended many gallery shows in the photojournalism department.

“David has meant a lot to me over the years,” Broekema said. “He’s been a great mentor.”

After his last day, Lee will continue to serve the university as its first official historian. Ransdell announced the new position in an email to all faculty and staff on June 19, 2017.

As historian, Lee hopes to continue recording the history of the university, which has not been completed since 1986. He said he hopes to achieve this by conducting oral interviews with former WKU presidents, including Ransdell and Thomas Meredith, faculty and staff members and student leaders.

“I would like to create a well-rounded picture of the university,” Lee said, saying he feels like a history professor recast as provost. “We are in the process of becoming a different kind of university. The next stage of history will be challenging, but it is heavy with potential.”

Despite the challenges, he said he will remember his time as provost.

“My fondest memories have been faculty and staff academic achievements,” Lee said.

In those achievements, Lee included celebrating awards won by teams and clubs on campus and honors awarded to WKU faculty and staff members. He said he hopes to continue attending and celebrating those special events.

The next provost replacing Lee will be Terry Ballman, Dean of the College of Arts and Letters at California State University, San Bernardino. Ballman will begin as provost on Aug. 1.

Caboni said he is thankful that the university will not be losing Lee both professionally and personally.

“Provost Lee has invested his life in this university and changed lives for the better,” Caboni said. “Not only can he be proud of those lives that he’s influenced, he can rest assured he’s left this institution in a better place than it was when he arrived 43 years ago.”