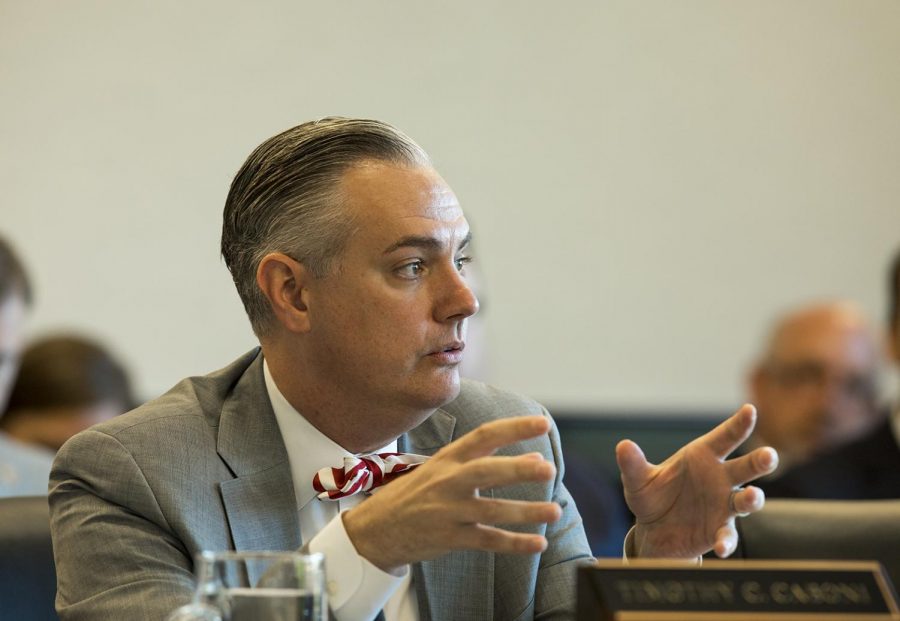 President Timothy Caboni speaks at the Board of Regents meeting on April 27 in Jody Richards Hall.

The WKU Board of Regents finance committee approved recommendations for the 2018-19 operating budget on Wednesday, including increases for tuition rates, online course fees for full-time students and full-time employee salaries.

“This is a new era for us in terms of budget improvement,” said Gil Johnson, chair of the regents’ Finance and Budget Committee, at the start of the meeting.

The committee voted to increase tuition by 4 percent for in-state undergraduate students. At their meeting on May 11, the regents asked the administration to consider a 4 percent tuition increase rather than the 3 percent President Timothy Caboni had initially recommended.

Out-of-state undergraduate students would face an increase in their tuition rates of at least 3 percent. The out-of-state rate, currently $12,756, would rise to $13,248 per semester. For international students, tuition would increase from $13,080 a semester to $13,572.

“The reason for leaving them at 3 [percent] or less is there is sensitivity to competitiveness with other institutions,” Ann Mead, senior vice president of finance and administration, said. Mead gave a presentation on WKU’s history of tuition and salary increases during the meeting — including a 23.5 percent tuition increase in 2003-04.

A 4 percent tuition increases for 2018-19 means that the maximum increase for 2019-20 would be 2 percent, under guidelines set by the Kentucky Council on Postsecondary Education for the coming two years.

Johnson noted that the process of putting together the university’s budget for 2018-19 has been far more open than it was in past years. He commended Caboni on his efforts to improve transparency.

“He made a commitment when he came to this university to have open decision-making and shared governance, and we sure have undertaken that process,” Johnson said.

“This is a different process that we’ve implemented this year, and it gives us the opportunity to have a wholesome discussion, which I think is appropriate,” Caboni said. “It will get us to a better decision.”

Caboni has said the bulk of the new tuition revenue would be used to fund pay raises for WKU faculty and staff. WKU had a salary increase of 4 percent in 2008, but increases since then have been minimal or nonexistent, according to documents provided to the finance committee, leaving employee pay lagging benchmark institutions and the private sector.

Creating a 4 percent salary-increase pool would cost WKU about $5.1 million annually, according to the finance committee documents. If approved, merit increases would be determined in the fall and raises would take effect Jan. 1, 2019.

“Obviously, the 4 percent salary pool will be well-received on this campus,” Mead said, noting the minimal salary increases for faculty and staff at WKU since 2008.

Another recommendation the committee voted on Wednesday called for increasing the online course fees per credit hour for full-time students from $100 to $150. This increase was suggested during the previous Board of Regents meeting.

About 4,300 full-time students at WKU paid the online fee or one-third of the full-time undergraduate population last fall.

Faculty regent Claus Ernst spoke against the increased online fee, questioning the reason for the fees.

“The issue of a fee is, by and large, that a fee is for a specific purpose,” Ernst said, also saying that an increased online course fee would not be used in the same way as other course fees.

“We are way out of line,” Ernst said, referring to WKU’s online course fee.

“The $50 increase is quite dramatic,” Mayer said. “I recommend that we look at other ways instead of putting the burden on the students’ backs.”

The committee also approved the budget balancing plan for 2018-2019 fiscal year, which includes using money that remains from the 2017-18 fiscal year, called “carry-forward,” to help balance the 2018-19 budget.

Caboni said that slowing the hiring process for the university has prevented making “deeper personnel reductions in the current fiscal year.”

“We have made—particularly on the budget balancing plan, which I want to mention—we had a challenging year, which we just finished, but we also have continuing work to do,” Caboni said.

“It’s not just about revenue and balancing the budget,” Caboni said. “It’s also about market demand and making sure we are making college accessible and affordable.”

With the committee’s recommendations, the Board of Regents will be asked to approve the budget during its meeting in June.