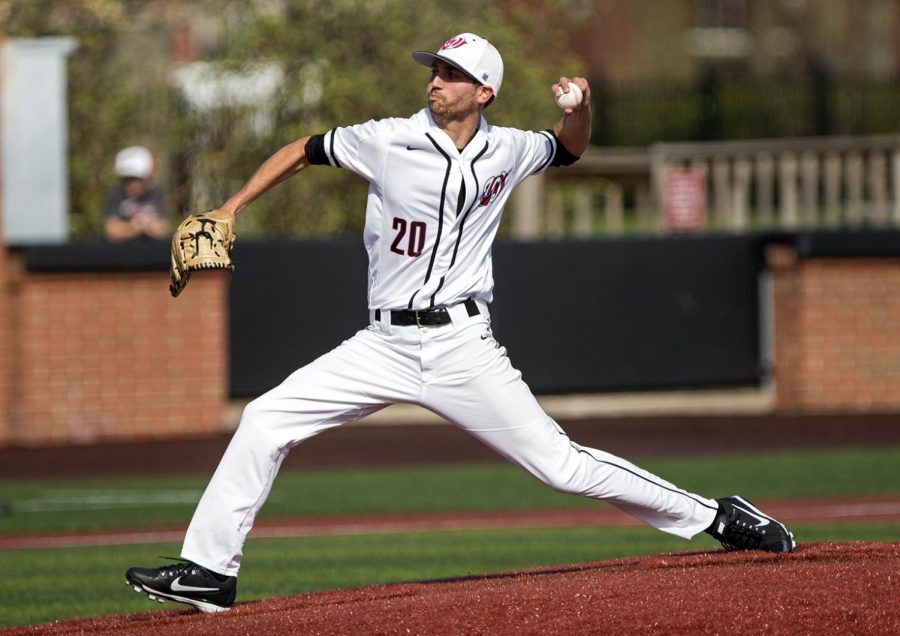 WKU baseball dropped its weekend series against UNC Charlotte, but picked up a victory that could prove crucial in the Hilltoppers’ quest to make the Conference USA Tournament.

The Hilltoppers came in to Sunday 0-2 for the series, but were able to hang on to a close game to come out of the series with one victory.

“Our guys just did an outstanding job today, really proud of our team,” head coach John Pawlowski said in a press release after Sunday’s game. “We’ve had a lot of good wins, this is as good of a team effort as we’ve had all year.”

In Friday’s game, WKU got out to an early lead, with junior center fielder Jacob Rhinesmith scoring sophomore infielder Kevin Lambert on a sacrifice fly. The Hilltoppers added another run in the fifth, when freshman right fielder Luke Brown scored on a Charlotte throwing error.

Brown finished the game with four hits, but the Hilltoppers were unable to hold their lead, with Charlotte making it 2-1 in the bottom of the fifth before taking the lead in the sixth. With three Charlotte runs crossing the plate in that inning, it became 4-2 in favor of the 49ers and would remain that way the rest of the game.

In the sixth inning, Rhinesmith scored on a single by junior catcher Colin Butkiewicz. In the seventh Lambert scored on a double by senior infielder Steven Kraft and Brown scored on a Rhinesmith flyout.

That ended up being the last offense that the Hilltoppers could muster and the 49ers added one more run in the seventh to make the final score 6-4.

In Sunday’s game, WKU got off to a red-hot start, with Brown and Kraft being driven in on singles by Rhinesmith and senior left fielder Colie Currie to take a 2-0 lead in the top of the first.

Charlotte scored one in the bottom of the first before the Hilltoppers’ offense got going in the second, scoring four runs, including a home run by Rhinesmith, his 13th of the season.

Charlotte mounted a comeback in the third and fourth inning, with four runs in the second and two in the third to gain a 7-6 lead.

Neither team scored again until the sixth, when junior infielder Nick Brunson hit his first career home run. The 49ers also scored in the sixth, but WKU added two runs in the seventh and held on the rest of the way for a 9-8 victory.

“To win games like this, somebody needs to do something extraordinary or something they don’t normally do,” Pawlowski said in the press release. “Look at what Nick Brunson did, he took a high fastball and turned on it, what a great swing by him.”

With the series loss, WKU moves to 21-26 on the season, 11-13 in C-USA. The Hilltoppers sit in eighth place, with the top eight teams making the C-USA tournament.

WKU will be back in action this weekend at Nick Denes Field for a series against Florida International.