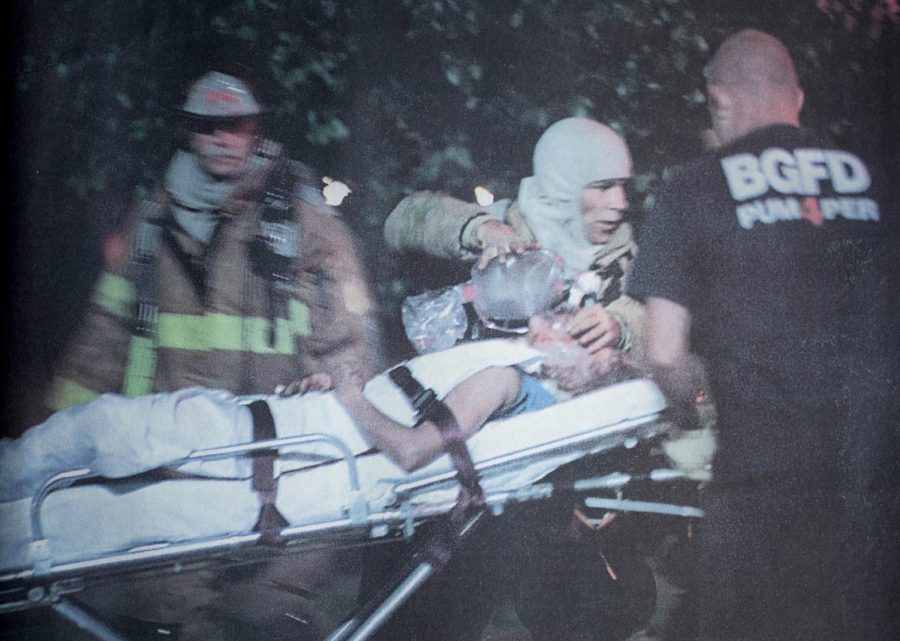 Photo from the Herald of the day Katie Autry was beaten, raped and lit on fire.

Fifteen years have passed, and the crime scene is still ingrained in Abbey Brown-Doyle’s head.

Brown-Doyle was the College Heights Herald reporter who covered the night in May 2003 when Melissa “Katie” Autry was brutally raped and murdered in a dorm room inside Hugh Poland Hall. Brown-Doyle said the experience of covering the murder still sticks with her, and she especially remembers the sound of Autry being given oxygen on the ground outside of Hugh Poland and seeing the devastation of Autry’s family.

“I think that was the first real time I got the opportunity to say, these are real people who are being impacted by these things. They’re not just stories,” said Brown-Doyle, who now works as an editor at the Courier-Press in Evansville, Indiana. “I think it’s so easy just to compartmentalize and to just do your job, and you’ve got that notebook that’s like a barrier for you. It kind of tore the notebook away and made you see what was really happening.”

In May of 2003, Autry, then 18, of Pellville, was wrapping up her freshman year at WKU. On May 3, Autry and her friends went to a fraternity party, coming back to Hugh Poland in the early hours of the next morning.

After returning, Autry was raped, beaten and lit on fire in her dorm room. She died three days later, May 7, at Vanderbilt Medical Center in Nashville, Tennessee.

After the murder, police arrested Stephen Soules, then 20, and Lucas Goodrum, then 21, both of Bowling Green. Soules, who declined to comment for this story, pleaded guilty to charges of rape, murder, sodomy, arson and robbery. He is serving a sentence of life without parole at the Luther Luckett Correctional Complex in La Grange.

Goodrum, despite testimony from Soules claiming Goodrum was the main perpetrator, was acquitted. Goodrum could not be reached for comment. Neither of the men were WKU students

Soules later filed a motion to vacate his conviction, claiming that his counsel was deficient, according to court documents. The motion was dismissed.

Autry was a quirky, fun-loving, former cheerleader who wanted to be a model and was often the funniest person in the room, according to her friends and family.

“She was always happy, even when I wasn’t,” Autry’s aunt, Virginia White, who has since died, said in a College Heights Herald article dated May 5, 2003. “She always smiled, she was just an outgoing person. She didn’t deserve to be here.”

The Autry murder prompted a discussion on campus safety, one that continues to this day as the university continues to try to make the campus safer, especially in the dorms. It is something White felt should have been addressed before the murder.

Autry’s family filed a wrongful death lawsuit against the university in September of 2003, alleging that WKU didn’t provide proper security that could have saved Autry’s life. In 2007, the Kentucky Supreme Court ruled that WKU is protected under sovereign immunity, according to a memo sent by former president Gary Ransdell in April of 2007.

An email sent by former WKU police chief Bob Deane on June 9, 2003 to WKU officials outlining how to discuss the murder with concerned parents at OAR orientation (now called Topper Orientation Program) said the perpetrators were believed to have been snuck into Hugh Poland by Autry. Students now must check in all guests by leaving their IDs with the desk clerk who then records who is in the building.

According to WKU’s director for housing and dining, Mike Reagle, one of the safety improvements coming next year will be electronic door locks on residence halls, which he says will improve dorm safety by taking keys out of circulation and using student’s ID cards, which can be deactivated.

“With a key system, if you lose that key, that key could still open up something unless you were to re-core the whole building,” Reagle said. “It should provide us a whole lot more security.”

“Everything we do begins with making sure that our students have a positive experience, as well as a safe experience at Western,” Kunkel said. “We at the university will do our part in reviewing and implementing policies or making changes to those policies to provide a safe atmosphere. At the same time, we try to educate and help students understand that there is a personal level of ensuring one’s safety as well.”

Tim Gray, public information officer for the WKU Police Department, said the police department has improved its response procedures if something like the Autry murder was to happen again by doing things such as improving its partnership with the Bowling Green Police Department. Gray said WKUPD’s main focus is on prevention, largely by trying to create a positive relationship with the WKU community and educating people in the community on crime prevention.

“We’ll go into the residence halls, and we’ll talk about hall safety,” Gray said. “Making sure that everybody that comes into the building is supposed to be there, they have a purpose in being there.”

Autry’s aunt said at the time that there should have been more safety procedures in place before the murder happened. Autry’s family could not be reached for comment. Autry’s roommate, Danica Jackson, did not reply to requests for comment by press time.