Board of Regents approves Collins’ $200,000 salary 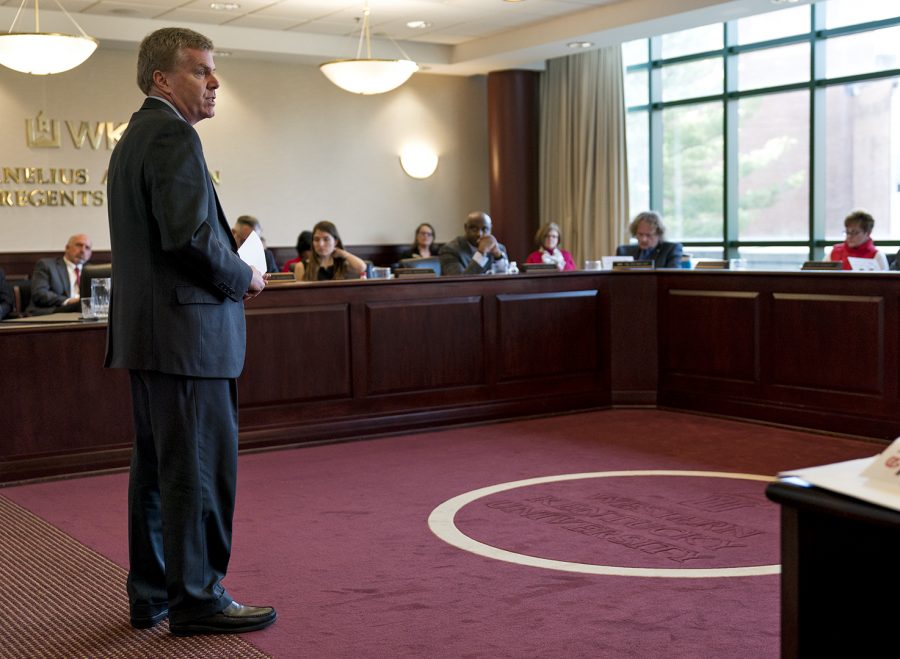 WKU Athletics Director Todd Stewart stands before the WKU Board of Regents on Jan. 26. The Board approved seven hirings and one raise for athletics on April 27.

Following an approval from the WKU Board of Regents, new WKU women’s basketball coach Greg Collins is set to receive a $200,000 salary in his new contract.

Collins’ contract is four years with a $200,000 annual salary, which was the same amount that former head coach Michelle Clark-Heard was making prior to her departure to Cincinnati. The contract, which was signed by Collins on April 12, includes other benefits and bonuses, all of which were also included in Clark-Heard’s contract.

“It was a very seamless transition where our program is right now, having been to four NCAA tournaments in the past five years,” athletics director Todd Stewart said. “That is what that position warrants, and the role that Greg had on Michelle’s staff during that entire time frame, I just felt that he was deserving of the exact same arrangement that she had.”

Clark-Heard’s original salary at WKU was $150,000. She received a $50,000 raise in 2013 to increase her salary 33 percent. Stewart said that if Collins has early success as Clark-Heard did, WKU will have to try to do what’s necessary to continue that success.

“If you’re only maintaining, you’re falling behind, so we’re going to have to continue to grow in every area of athletics, and certainly reward the people that are successful in growing those areas,” Stewart said. “As time goes on, I would hope that that’s an area we can grow it.”

As part of his benefits, Collins will receive four VIP football season tickets, six Red Towel women’s basketball season tickets, six reserved seat women’s basketball tickets and four tickets to NCAA Tournament games that the team participates in, per his contract. Collins will also receive one automobile for use “on a loan basis” from the university.

For each year, a team academic progress rate of +940 will net Collins an additional 5 percent of his base contract, which would currently be $10,000. An additional bonus of the same amount can be earned if the APR reaches +970.

Collins also has a chance to receive as many as five bonuses of $16,667 each in performance incentives, which equals one month of his current salary. He’ll get that bonus for each of these accomplishments:

•Conference Coach of the Year

If Collins and the Lady Toppers were to reach all of these achievements, Collins’ maximum payout would be $303,335.

Collins’ contract dictates that if he wants to pursue another coaching or sports-related job opportunity, he must notify and obtain permission from the athletics director.

Collins’ buyout is $250,000. If WKU terminates the contract without cause, the university will be required to pay Collins his buyout, or “an amount equal to the coach’s base salary as of the date of termination, whichever amount is greater,” per his contract. Collins would have to pay the same amount to WKU if he terminated the contract early.