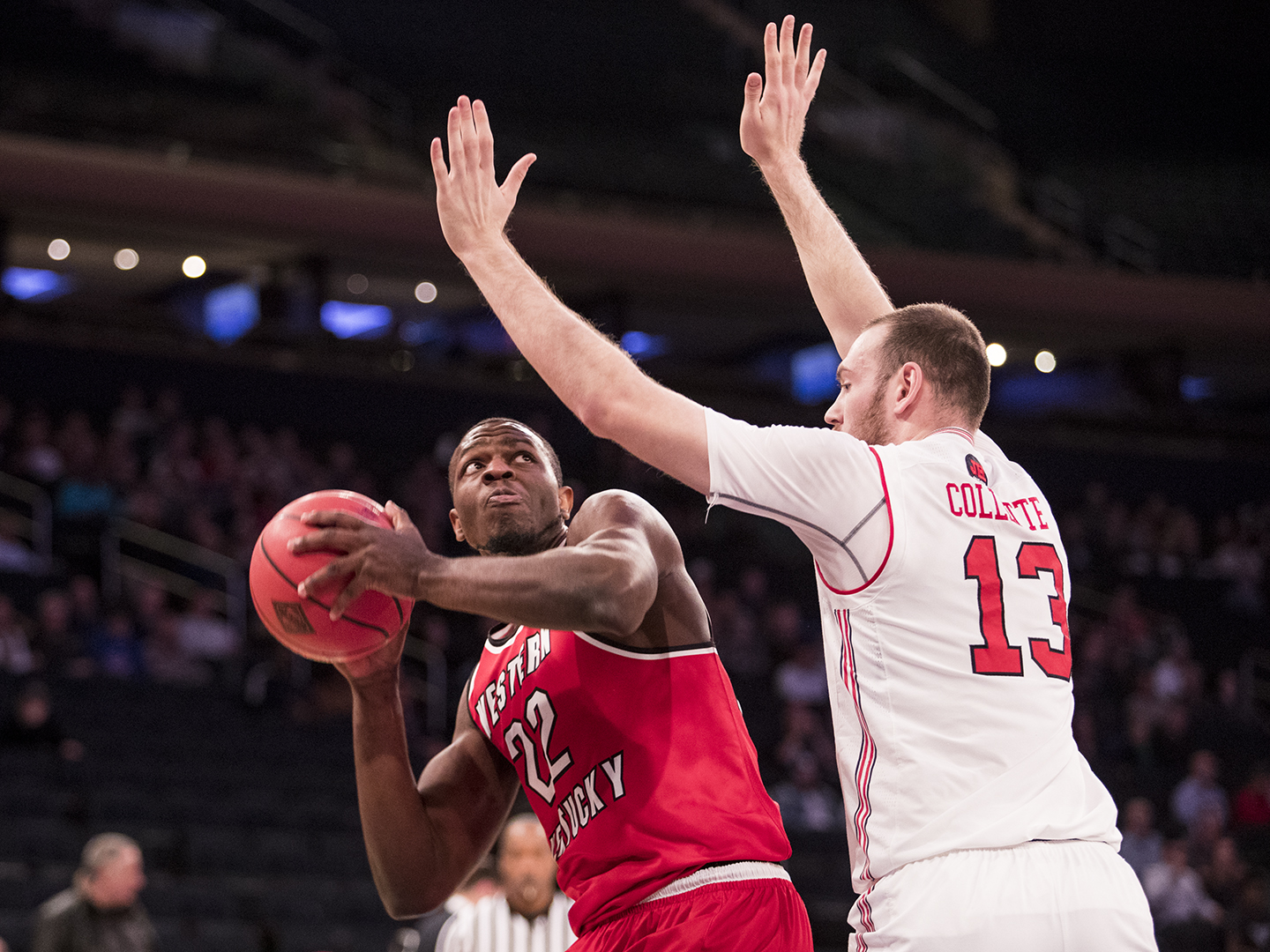 WKU forward Dwight Coleby is defended by Utah's forward David Collette during the semifinals of the NIT Championship in Madison Square Garden on March 27. WKU lost 69-64.

WKU men’s basketball is close to finalizing its 2018-19 non-conference schedule, which currently features a trip to Myrtle Beach and a lot of rematches from last season.

With the addition of the Myrtle Beach Invitational last week, WKU basketball added three more games to an already loaded up non-conference schedule.

The bracket to the invitational has not been released yet, but it includes West Virginia University, Wake Forest, Valparaiso, Central Florida, Saint Joseph’s, Cal State Fullerton and one other team yet to be announced.

The Hilltoppers are 11-5 all time against the current Myrtle Beach Invitational field. This tournament is sure to test WKU early in the season.

West Virginia made a Sweet 16 appearance last season, and the Mountaineers only lost Jevon Carter and Daxter Miles Jr. to graduation. Should Sagaba Konate withdraw from the NBA draft, the Mountaineers will likely be a preseason top 25 team. WKU defeated West Virginia 64-62 the last time they played in the first round of the 1987 NCAA Tournament.

Wake Forest will be much improved in 2018. They did finish the season with an underwhelming 11-20 record, but head coach Danny Manning is bringing in the 19th-ranked recruiting class in the country. That includes top-30 talent Jaylen Hoard. WKU has never faced Wake Forest in program history.

Valparaiso is coming off of a rebuilding year after losing star forward Alec Peters, finishing just 15-17. Valparaiso is another program WKU has not faced yet.

UCF narrowly missed out of the NIT after finishing 19-13 last year, but had multiple crushing injuries throughout the season. They return their top seven players, including 7-foot-6-inch center Tacko Fall. The Golden Knights are a real threat to win the American Athletic Conference. WKU defeated the Knights 73-68 back in 2005.

Cal State Fullerton won the Big West Conference Tournament in 2018, earning a 15 seed in the NCAA Tournament. They fell to Purdue in the first round. WKU has yet to face the Titans in program history.

The Hilltoppers lost a heartbreaker in the Kohl’s Center in December, 81-80. Wisconsin guard Brad Davidson drew a controversial block in the final seconds and hit the game-winning free throw. Coming off a losing season, Wisconsin head coach Greg Gard will have a much more experienced squad for 2018.

Saint Mary’s was a number one seed in the NIT. Saint Mary’s will be without power forward Jock Landale after his graduation. He was one of the best forwards in the nation last year.

WKU handled Austin Peay back in December, winning comfortably with a score of 73-55. The Governors finished 19-15, losing to Illinois-Chicago in the Collegeinsider.com Postseason Tournament to end their season.

WKU will travel to Fayetteville, Arkansas, to take on the Razorbacks as a result of an agreement by both teams in March. Both programs’ basketball and football teams will play a home-in-home series. This will be the first meeting between the two programs. Arkansas will return potential 2019 lottery pick Dan Gafford to its 2018 squad.

The Hilltoppers will look to avenge their opening loss of the 2017-18 season at Missouri State. WKU attempted to rally after falling behind early, but Missouri State hung on to win 85-80.

WKU handled Eastern Kentucky 83-51 in Diddle Arena in November 2017. New head coach A.W. Hamilton will try to get EKU back on track this season.

The Hilltoppers will travel to Terre Haute, Indiana, to take on the Sycamores as well. WKU had their way with Indiana State in December 2017, winning 81-65.

Wright State didn’t stand much of a chance in Diddle Arena in 2017 either, falling to the Hilltoppers 78-60. They’ll look for revenge in Dayton, Ohio, this fall.

WKU has two slots left to fill on its non-conference schedule for next season.