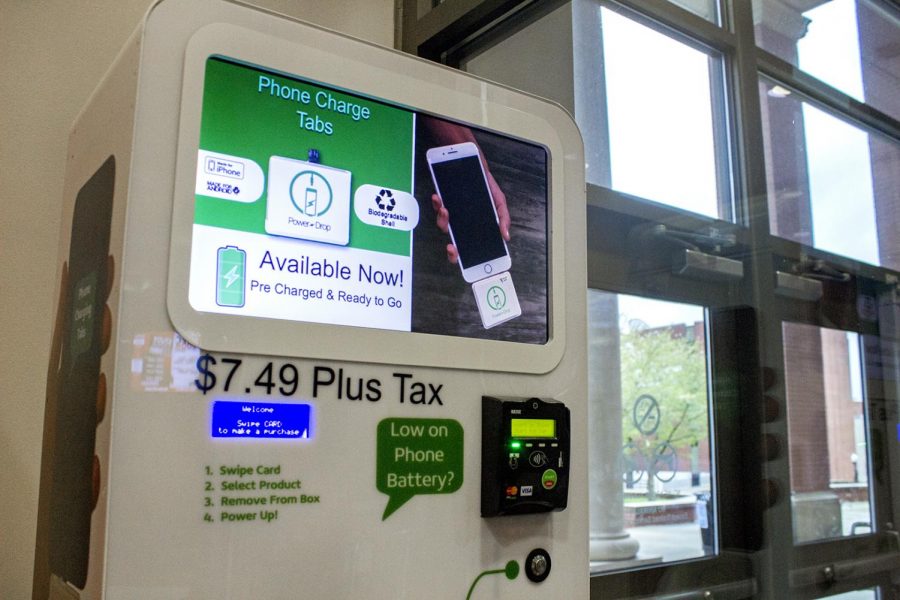 WKU now has Power Drop charging stations located on campus that allow students to charge their phones on the go. These stations provide pre-packaged and charged phone tabs that plug in to the bottom of your phone for a one time use. Stations can be found in both Jody Richards Hall and Downing Student Union.

The Power Drop vending machines are located in Jody Richards Hall, Cravens Graduate Center and Library and Downing Student Union. The cost for a charger is $7.49 plus tax.

Marcus Korba, a WKU alumnus who invested in the Power Drop franchise, said the idea to bring the chargers to WKU was his.

“My older brother and I came up with the idea,” Korba said.

Korba said it’s common for phones to run out of battery throughout the day, especially when it comes to busy college students.

The main reason Korba brought these vending machines to WKU’s campus is for safety, he said. He said he believes it’s important to have a charged battery in case of emergencies because people rely on their phones in their daily lives.

“Our technology is changing so quickly,” he said.

Korba said he thinks these chargers could be especially important for women when they are faced with potentially dangerous situations. He said the chargers are small enough to easily fit in an accessory like a clutch or small handbag.

Korba said he hopes to partner with Mothers Against Drunk Driving to advertise these chargers and promote safety.

As a WKU alumnus, Korba said he just wants to give back to WKU. He said the Power Drop machines are a chance to help college students.

Marshall Gray, the director of postal, printing and vending services at WKU, said the Power Drop machines have been received well.

“The Power Drop vending machine is a convenience item that will allow students to continue with their day to day activities,” he said.

Korba said he also hopes to put Power Drop machines in high schools in the future.

“I think the idea behind the machines is really admirable,” said Bowers. “I hope they gain more exposure among students because this is something everyone can use.”