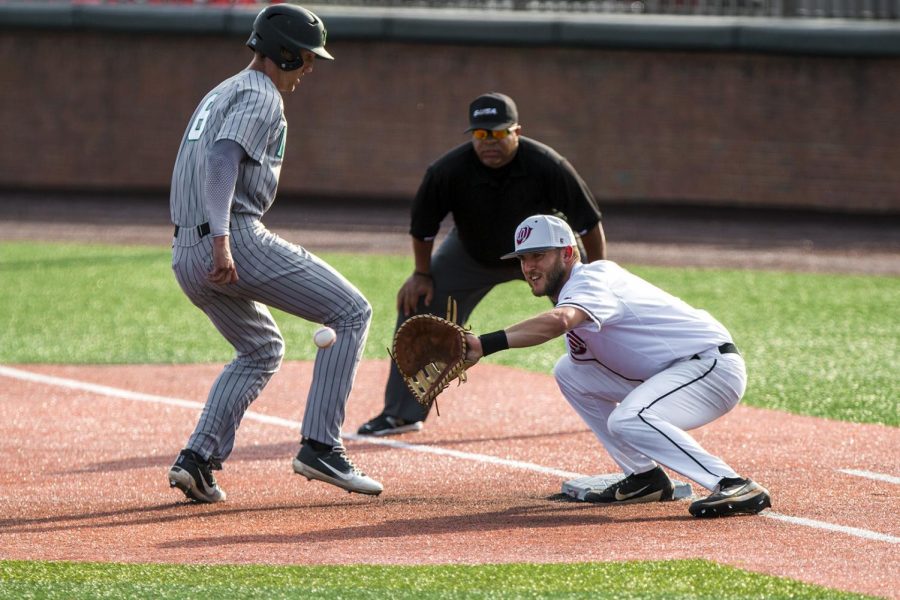 Red shirt senior infielder Tyler Robertson (6) reaches out to catch a throw after Marshall infielder Tucker Linder (6) tired to steal bases during the a game against Marshall on April 13 at Nick Denes Field. The Hilltoppers won two of the three games against Marshall this weekend.

WKU topped its 2017 win total by beating Marshall in a series that highlighted the offensive skills of several of WKU’s best players.

WKU’s offense had no issues scoring in any of the games, bringing five, six and seven runs across the plate in each.

In the first game of the series and the first game of Friday’s doubleheader, the Hilltoppers were off to a slow start, quickly dropping down 2-0 before coming back to tie the game when senior infielder Steven Kraft singled in freshman infielder Kevin Lambert. That was followed by a sacrifice fly from senior left fielder Colie Currie, which scored junior infielder Nick Brunson.

WKU was unable to stop the Marshall offense in game one, as they took another two-run lead. But WKU was able to come back and tie the game once again when a single by freshman right fielder Luke Brown scored senior infielder Tyler Robertson and sophomore utility man Ray Zuberer III.

With the game tied 4-4 in the eighth inning, Marshall added two runs off of RBI singles by junior outfielder Shane Hanon and junior catcher Reynaldo Pastrana. WKU was able to add one in the ninth on an RBI single by Robertson to make it 6-5, but the rally ended there with the Hilltoppers falling to the Thundering Herd.

In the second game the Hilltoppers were the ones taking the early lead. A Nick Brunson hit and an error by Marshall allowed Brown to score to make it 1-0 in the second inning.

In the third inning, Marshall responded with RBI singles by Hanon and Pastrana to take a 2-1 lead, the Thundering Herd’s only lead of the second game.

WKU quickly came back to retake the lead on a single by sophomore first baseman Richard Constantine that scored Kraft and junior right fielder Jacob Rhinesmith. The Hilltoppers never looked back and went on to win the game 6-2.

After taking Saturday off due to rain, the two teams were back on the diamond Sunday for the deciding game of the series, with senior left hander Austin Tibbs getting his first pitching start of the season.

The Hilltoppers scored four runs through the first two innings off of an RBI double by Currie and a sacrifice fly by Robertson. Rhinesmith grounded into a fielder’s choice, which scored one run, but Marshall’s sophomore infielder Peter Hutzal made a wild throw that allowed the Hilltoppers to score another run.

The third inning was eventful for WKU. After Marshall scored to make the score 4-2, the Hilltoppers were able to load the bases with no outs. WKU failed to bring a run across the plate, stranding all three runners, including Brown.

“It’s baseball so it happens,” Brown said after the game. “You know when you get bases loaded no outs, you got to find a way to score some runs. There are pitches, I mean, you got to give them credit, they made good pitches at the right time, and, I mean, it just happens, it’s baseball.”

WKU also made an early pitching change in the third inning, which Pawlowski attributed to Tibbs making his first start.

“He’s been pitching in relief and he’s done a great job,” Pawlowski said. “We knew we had a fresh bullpen, so we figured that, you know, we’re going to run different guys out there, matchups. I thought our bullpen did a really good job today.”

The inability to bring runs across the plate did not extend into further innings for the Hilltoppers, as they added four more to win the game 7-5.

“It’s a great win for us,” Brown said. “We knew coming into this that we need to win this series, so taking two out of three from Marshall, which is a very good team, it was really good.”

The series win brings WKU’s record up to 17-18, 7-8 in the Conference USA. The Hilltoppers play again at home on today against Tennessee Tech before they go to Alabama for a weekend series against Alabama-Birmingham.