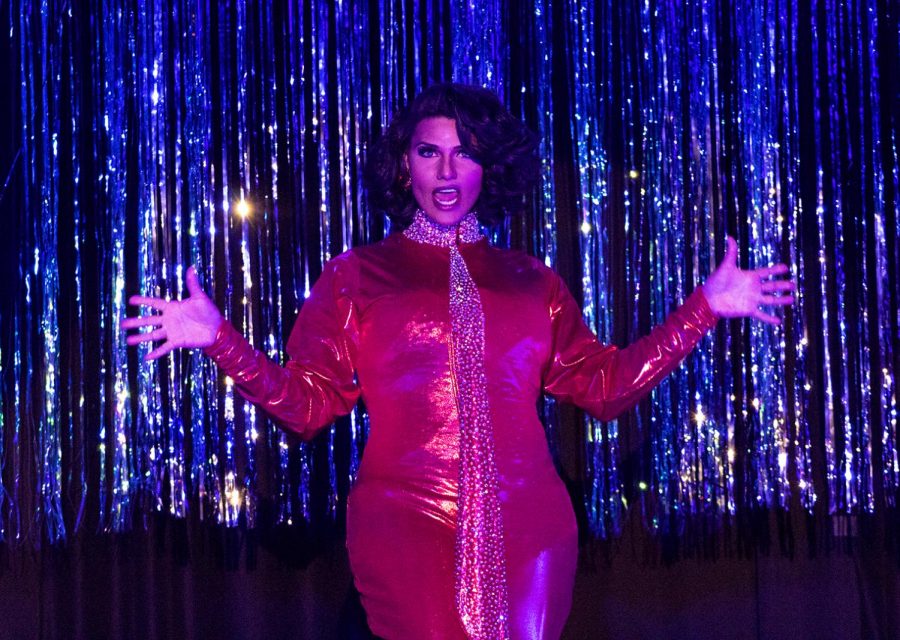 The moment the lights dropped and the thumping, bass-filled music began, the room filled with cheers.

Students of all ages, sexualities and identities filled the room of the Knicely Conference Center on WKU’s South Campus on April 5 for WKU Housing and Residence Life’s 4th annual drag show. Some attendees had never been to a show like it before, and some were long-time fans. They all joined together and filled the room wall to wall.

“We used swipes and iPads [to count attendees],” junior David Greenwell, who worked the event, said. “The venue was only set up for 400 people, but we had over 600 people there. We’ll definitely have to find a bigger place to do it next year.”

The evening was filled with high-energy dance numbers and empowering ballads, all woven together with a common theme: love is love.

During the event, 13 drag queens and kings showcased their talents not just in dancing, but also in costuming, makeup, hair and, in general, staying graceful.

The performers consisted of WKU students, alumni and faculty.

As co-host and drag queen Lily McQueen Fitzgerald said at the beginning of the show, “We all represent WKU.”

Co-host and drag queen Cheryl Cheva has been doing drag for about a year. Out of character, Cheva is Travis Lizer, a sophomore at WKU studying political science and communication.

“This show marks my one-year drag anniversary,” Lizer said. “I love drag because it gives people a chance to experiment with sides of themselves they may not reveal otherwise.”

Lizer and McQueen Fitzgerald talked about the journey that is drag. They referenced the heavy cost, long hours and great difficulty of technical skills that come with participating in drag.

“All of this time and being taught by these talented ladies and I still can’t get my eyebrows perfect,” Lizer joked during the show.

Eliza Jackson, a coordinator for Housing and Residence Life who has been involved with the event for three years, said most of the performers practice on their own time and by participating in other shows. Performers are given one chance to run through their number prior to the show in order to get a feel for the space.

Some performers, however, prefer to wing it and base their performance off the crowd’s energy. Venus Knight, a drag queen who graduated from WKU and worked with Housing and Residence Life for three years, said she simply picked her songs a couple hours before the show started.

For Knight, who has been performing for nearly 10 years, the best part of drag is the joy and excitement that both the crowd and performers bring to the event.

“My favorite part is seeing and hearing all the amazing people and their joy and excitement of what the entertainers are bringing to them,” Knight said.

Jackson also said the energy is what she loves about the event.

“I just love the excitement and the performers,” Jackson said. “There is an energy that permeates the whole building. It’s always an incredible show.”

The co-hosts took time to give shout outs to the parents in the audience and even spent time inviting a little girl who was in attendance onto the stage in order to give her and her mom a round of applause for being there.

They voiced the importance of love and acceptance, telling the audience that events like this and seeing the turnout give them hope for the future.

“When we started the WKU drag show we had less than 200 people [in attendance],” Knight said. “This year [we have] well over 600. That shows a huge accomplishment and that we are in the right direction.”

The co-hosts also encouraged each and every performer, making sure to point out which performers were new to drag.

As the drag queens and kings danced and strutted, Jackson voiced hopes for the greater purpose of the event.

For more information about the drag show and how to get involved, contact Eliza Jackson at [email protected]

Features reporter Julie Sisler can be reached at 270-745-6291 and [email protected] Follow Julie on Twitter at @julie_sisler.