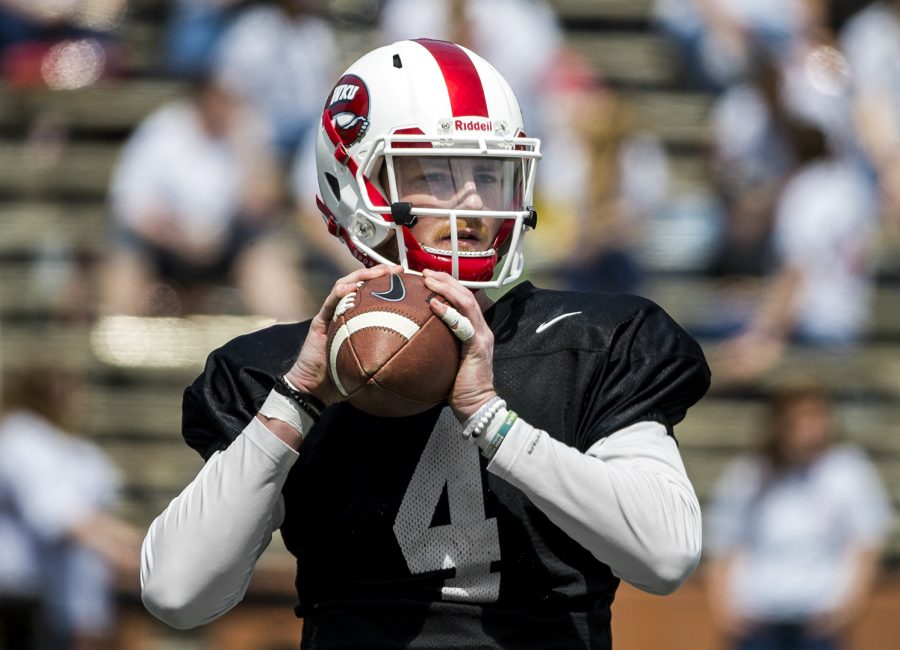 Redshirt senior quarterback Drew Eckels (4) throws a pass while warming up at the preseason spring football game in L.T. Smith Stadium on Saturday.

WKU football head coach Mike Sanford is still figuring out who his starting quarterback will be for the 2018 season opener.

The annual Red vs. White Spring Game was the conclusion of the spring practice season for the team, and neither rising redshirt senior Drew Eckels or rising redshirt sophomore Steven Duncan has outright claimed the starting spot yet. Sanford said he will use the spring game tape to continue the evaluation of his quarterbacks.

“We’re going to continue to evaluate the film,” Sanford said. “Obviously I have to take a look at this spring game. There’s a lot of nuances you see from watching the film in terms of what we’re asking them to do. A big part of that position is doing what your coached to do. We’ll make a decision when the time is right.”

Eckels got the first reps with the first team offense and moved them right down the field immediately. He went 3 for 3 for 60 yards and a touchdown on the first drive.

“We need a quarterback with the toughness to be able to bounce back from adversity,” Sanford said. “I thought Drew has been very steady in that area.”

Eckels said he knows as a senior that it’s his time to lead and it is one of the keys to secure the starting job.

“I need to lead better,” Eckels said. “I need to be a better example and be a voice for the younger kids. Just really look out for myself in everything I do and I should be good after that.”

Although the goal is to be the starter, Eckels said he is content with playing where the coaching staff wants him.

Although Eckels was the starting quarterback for the Red team, there is clear competition not too far behind as the coaching ramps up its evaluation of the position. Duncan played an efficient and accurate game, going 6 for 7 on his first drive, which ended in a touchdown.

Following the spring game, Duncan was arrested for a DUI charge early Sunday morning, according to the Warren County Regional Jail’s online information system. The program has not announced any decision in light of the arrest, but said that they were “gathering more information” and took the issue “very seriously as a football program,” according to a statement.

The Eckels-Duncan tandem led the Red team to a 24-14 win over the White team in Houchens-Smith Stadium on Saturday.

Redshirt freshman Davis Shanley led the White team, and the opposing defense struggled to get him to the ground. He ripped off multiple long first-down runs and ran for a touchdown as well. His legs were a major weapon for his offense.

“Davis Shanley, I think he shows a lot of toughness,” Sanford said. “The defense was a little frustrated trying to get him down, and they said let’s just go ahead and tackle the guy.”

It is clear there are plenty more evaluations and film studies to go before Sanford and his staff officially decide who the starter will be when WKU takes on Wisconsin Aug. 31.