Student uses art to illustrate past, present and future 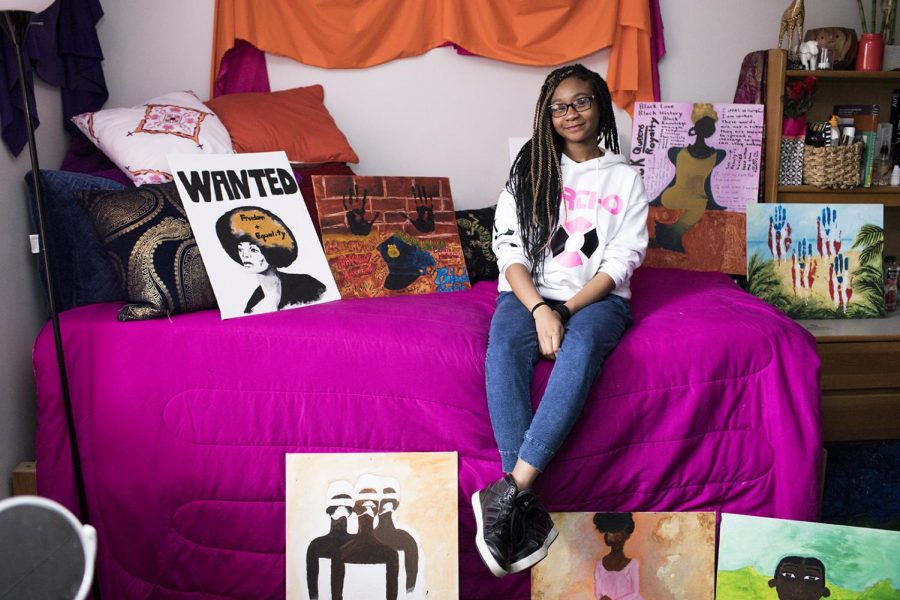 Sophomore Darinda Reddick, 20, has taken her hobby of creating art and turned it into a way to advocate for issues that matter to her. The focuses of Reddick's art are feminism, political and social issues and supporting black women. "I always try to represent black art, because most black art doesn't get represented a lot in the media especially black women and who we are... beautiful, smart and independent," Reddick said.

Sophomore Darinda Reddick’s goal is for her art to “speak volumes,” and her most recent piece, “The Revolution Will Not Be Televised” did just that.

Reddick said she usually does paintings that reflect themes of black feminism and black beauty.

“The way the media portrays black women is that they’re ugly or weak,” Reddick said. “I try to portray black women as kind, calming, generous, humble and as beautiful as they are.”

Reddick said she transfers those ideas to her representation of Africa. She illustrates the idea that Africa is the motherland and tries to convey the connection between the beauty of Africa and the beauty in every black woman.

For her latest piece, however, Reddick drew inspiration from black men and something she said isn’t as beautiful: the abuse of black men’s bodies.

“Black people’s bodies are being targeted in society,” Reddick said. “This still happens. This isn’t anything new.”

Reddick said she has lately been moving toward more political art, which she said she believes is the best way for her to be passionate about her art and allow her voice to be heard.

Reddick decided to bring a painting entitled “Black Body” to life through the use of makeup and latex in the form of “The Revolution Will Not Be Televised,” a realism piece featuring three black men, each shirtless, with a different form of brutality shown on their back: gunshots, whip marks and branding using makeup and latex.

The title comes from the 1970 song by Gil Scott-Heron, which Reddick said resonates with her beliefs that the world is changing now and needs to be more than just on TV: it needs to be live and present in everyone’s life.

“While the seemingly endless stories of men like Trayvon Martin, Alton Sterling, Michael Brown, Eric Garner and Philando Castile planted the seeds for this display, Darinda’s work digs deep into the nation’s past to remind us of the persistent vulnerability of black life and, by extension, the unfinished project of democracy’s reconstruction in America,” Rosa said.

Freshman Austin Brown bore whip marks, which Reddick said is representative of the days of slavery and how black bodies were abused then.

Brown sees the lash marks as a sign of brutality from the past, whereas the gunshot marks show the brutality that takes place in today’s society.

Reddick agreed, saying that the abuse is not over, but has evolved from whips and brands into guns and institutionalized oppression.

“I was trying to grasp the concept that history repeats itself,” Reddick said.

She said that people will argue that racism is over or that black people aren’t abused or in danger anymore, but that’s not true.

“For me, seeing it as just a scar is disempowering so I look at it more like a birthmark for all of us,” Brown said. “We were born with and made with the struggles of our past. As ugly as it is, it’s part of what makes us who we are.”

Brown said that the production of the piece was extremely important and that he was honored to be a part of the piece.

“We are the voice of the future,” Reddick said. “It’s our job to speak up, whether that’s through a speech or art or writing. But you have to say something. Don’t stay silent.”

Reddick finds that though it can be difficult to speak up, it’s what’s necessary in order to spark progress, which all begins with a discussion.

Reddick said that though the piece’s response was overwhelmingly positive, she knows that it made some people uncomfortable, acknowledging that some people wouldn’t like it or would even hate it. Her goal was to get everyone who saw it to form their own opinion of the piece and really just think about it.

Reddick also wanted to present a piece that supported the black community, something that Brown said she achieved.

“I think really highly of Darinda for creating something that strengthened the black community and bridged the gap between us and the other racial groups on campus,” Brown said.

Rosa echoed the statement. “‘The Revolution Will Not Be Televised’ announces the arrival of an incredibly talented and versatile artist who is committed to transforming the world through sparking thought and action around images that evoke suffering, struggle, and hope in a better day coming.”