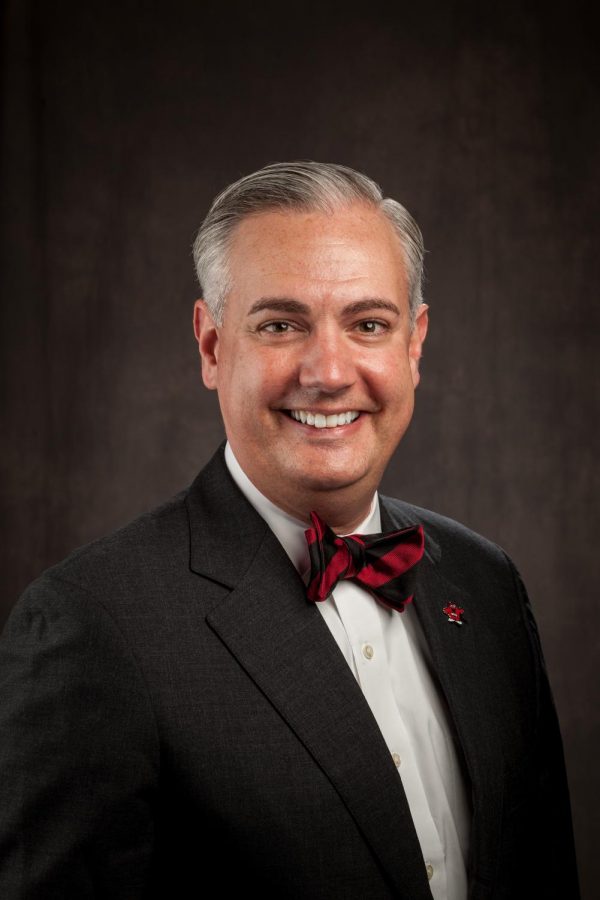 WKU will host an Investiture Ceremony Friday to officially mark the start of Timothy Caboni’s tenure as WKU’s 10th president.

The ceremony will be held at 2 p.m. in Centennial Mall, and a reception at the Downing Student Union courtyard will follow, according to the event webpage.

Bob Skipper, director of media relations, said the Investiture Ceremony is a ceremonial event to mark someone stepping into a new role.

He said Caboni was sworn in as president by the Board of Regents when he first started at WKU, but this will be the first public ceremony the community is invited to participate in to mark the start of Caboni’s tenure as president.

“This allows them some time to get settled in the job,” Skipper said.

“Anybody who is interested in attending is welcome to regardless of their ties to the WKU community,” Skipper said.

Since starting at WKU in July 2017, Caboni has introduced the phrase “student centered, applied research university” to describe WKU. He has also integrated a strategic planning process into WKU to help create a plan to guide the university for the next 10 years. The plan includes several committees all overseen by the overarching Steering Committee. Throughout the past academic year, the committees have been meeting and also presenting their progress at public forums.

Caboni has also had to handle WKU’s ongoing budget deficit.

In October, Caboni announced the implementation of an approval process for personnel actions to address the budget deficit. Under the new approval process, personnel requests must be approved by the Personnel Actions Approval Committee. All vacant positions must be evaluated by the Personnel Actions Approval Committee before being filled.

On Feb. 23, the Budget Council released a list of recommendations, a majority of which Caboni accepted. All together, the recommendations eliminated about $15 million. Eliminating University College, returning the regional campuses to the Division of Extended Learning and Outreach and reducing the workforce were among the recommendations. Since then, 119 full-time positions, both vacant and filled, have been eliminated. Of those 119 full-time positions, 62 were filled at the time of elimination. The budgeted salaries for all 119 positions amount to over $5 million.

Like his predecessor Gary Ransdell, Caboni is a WKU alumnus having graduated from WKU in 1994 with a master’s in organizational and corporate communication, according to his curriculum vitae.

He received his bachelor’s in speech communication and rhetoric in 1992 from Louisiana State University and his doctorate in leadership and policy studies in higher education in 2001 from Vanderbilt University.

Prior to becoming WKU’s 10th president, he served as the vice chancellor for public affairs at the University of Kansas for six years.

Skipper said Graves Gilbert donated the money to cover the cost of the ceremony.

Those interested in attending the free event can register online.