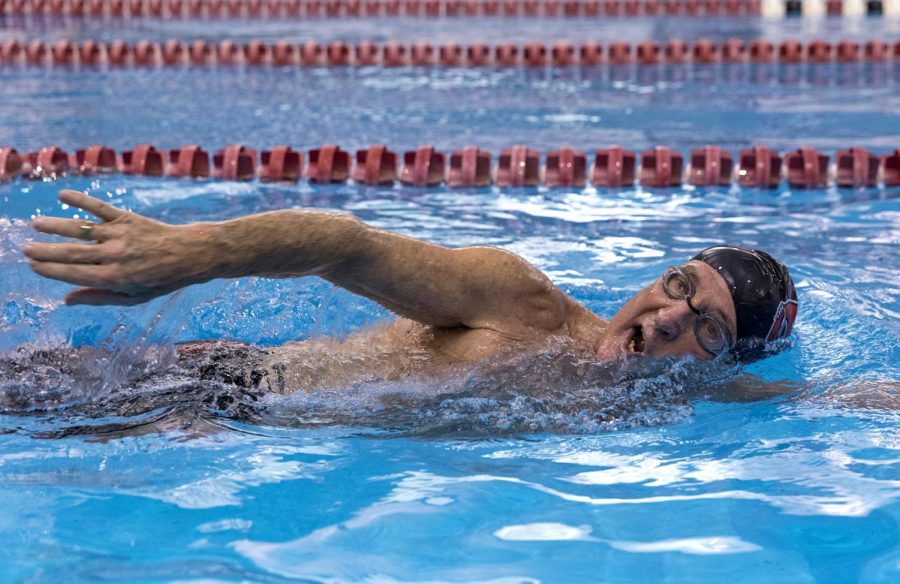 Former head coach for the WKU swim team Bill Powell celebrates his 81st birthday by swimming 81 laps in the Bill Powell Natatorium. Powell has been participating in this tradition since his 46th birthday.

He was cheered on by his wife Joanne Powell, as well as former swimmers of his who were helping to document the event and keep track of his laps and time.

Powell was WKU’s swim coach for 36 seasons, according to his website. He founded the WKU swim program in 1969, and retired from full-time coaching in 2005, according to WKU athletics. In that time he recorded 330 dual meet victories, which made him the second-winningest Division I swim coach in NCAA history.

The tradition first began on Powell’s 46th birthday. He showed up to the pool as he does most mornings but didn’t have a plan in mind for his workout.

“I don’t always know exactly what I’m going to do when I start swimming, I make it up as I go along,” Powell said. “And I said ‘ah heck I’m going to swim 46 lengths.’”

Some of the swimmers Powell coached heard what he had done, and it became a tradition. In the 35 years since its inception, Powell has never missed a birthday swim.

Powell believes these swims may have even earned him a few world records due to the odd distances he has ended up swimming over the years, starting with his 79th birthday.

“Who do you know that’s ever swam 1,975 yards for time?” he said. “I figured it was the only one that had ever been swum, so I’m claiming a world record.”

When Powell was 75 he broke a bone in his back, which made it difficult for him to walk or exercise. A doctor in Bowling Green told him surgery was necessary, but they would “lose him on the table.” Powell’s son told him about a doctor in Nashville who had performed surgery on a 92-year-old woman who hadn’t walked in three years. She was now able to go up and down stairs without support even though previous doctors told her she wouldn’t survive surgery.

Once the Nashville doctor found out Powell was one of two people in the United States that were over 75 and could still swim a mile under 30 minutes, he said the surgery would be no problem.

“I tell all my students, you better swim everyday, and then when you fall apart when you’re 75, they’ll be able to put you back together again without any problems,” Powell said.

Powell continues to swim five days a week and advocates the importance of continuing to exercise as one gets older.

“Some people say, ‘You do all that exercise just so you can live an extra year?’” Powell said. “No it’s while you’re living, feeling that much better … the pep and the energy that you get from working out can’t be beat.”

Despite also having a history as a track runner, Powell said that swimming is the best form of exercise, especially for people who may be older.

Powell also stresses that it is never too late to learn how to swim, and he enjoys giving lessons to anyone, regardless of age. He was once approached by an 89-year-old woman who wanted to learn to swim so she could spend more time with her grandchildren at the beach. Powell taught her to swim and even once got her to jump off the diving board.

Despite facing health issues at the beginning of the year that only allowed him to swim three days in the entire month of January, Powell says he will continue to swim and have his traditional birthday swims for as long as he can.

“My main motivation to continue swimming is to stay alive,” he said.