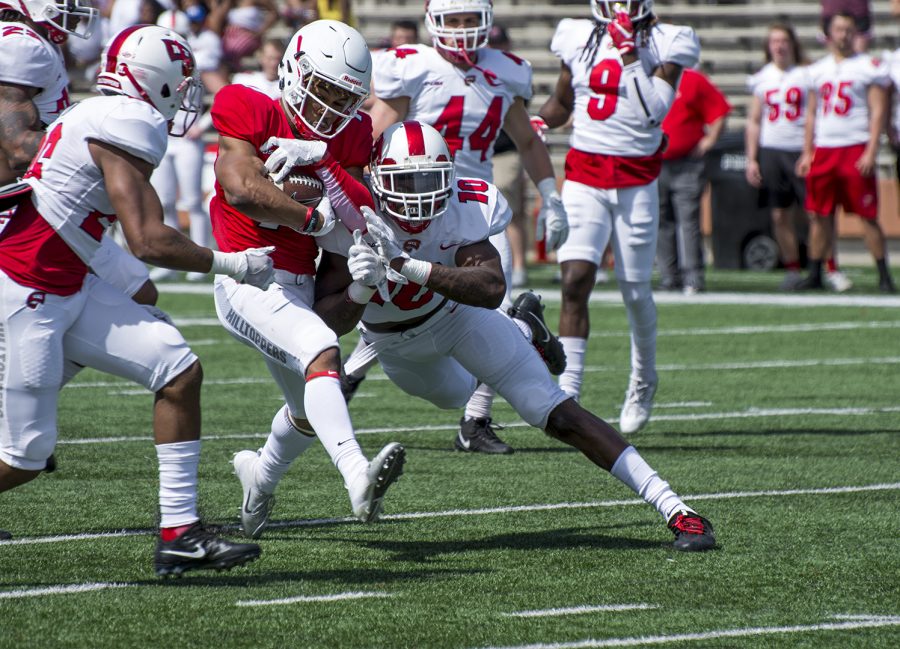 Sophomore defensive lineman DeAngelo Malone (10) brings down the ball carrier during the spring game at L.T. Smith Stadium on April 21.

The Hilltoppers will be looking for a new group of players to step up this season after losing much of their production to graduation, especially Derik Overstreet and Chris Johnson, who combined for four of WKU’s 12 sacks last season, a total that put them in last in Conference USA.

Defensive line coach Jimmy Lindsey said that he was looking for improvement in technique from his players over the course of spring practice.

“Going back to day-one teaching, just getting the guys fundamentally as best we can,” Lindsey said of the spring focus.

Lindsey said that he was happy with what he saw from his defensive line this spring, despite missing several players due to injury.

“It’s been good to build some depth with some younger guys,” Lindsey said. “Who might have not got as many reps with our older guys back.”

One of those players is rising redshirt sophomore Jeremy Darvin, who played in eight games last season, registering 17 total tackles, including 1.5 for loss. Darvin, who is listed at six-foot-one-inch and 305 lbs, said that he was happy with the way spring practice went.

“They’ve been coaching us up,” Darvin said. “Making sure we do all the lineman assignment stuff right. We’ve been flying around, making sure we know the plays and stuff like that.”

Darvin said that he had been working on technique and trying to get faster over the course of spring practice.

Darvin said he expected to move in to a bigger role on the defensive line this season.

“With our big guy, Chris, leaving last year, and with Julien and Sayner, they’re out for a minute,” Darwin said. “I’ve been in a bigger role this spring. Coach [Kenny] Martin’s been prepping me for that, you know, telling me that. We’ve been working hard this spring, especially with the limited guys, so I’ve been able to get a lot of reps and a lot of practice.”

The Hilltoppers’ defensive line has suffered from injuries this spring, including redshirt seniors Julian Lewis and Evan Sayner, both of whom did not play in Saturday’s spring game. Lindsey said that not having any more injuries was his main goal for the game, as well as getting some of the younger players on the team more experience.

“No injuries and just play in a game setting,” Lindsey said. “You know that’s one of the key things for this group, you know we’ve got a lot of guys who haven’t really played snaps, so we need guys to be able to play when the bullets are flying, I think that’s important.”