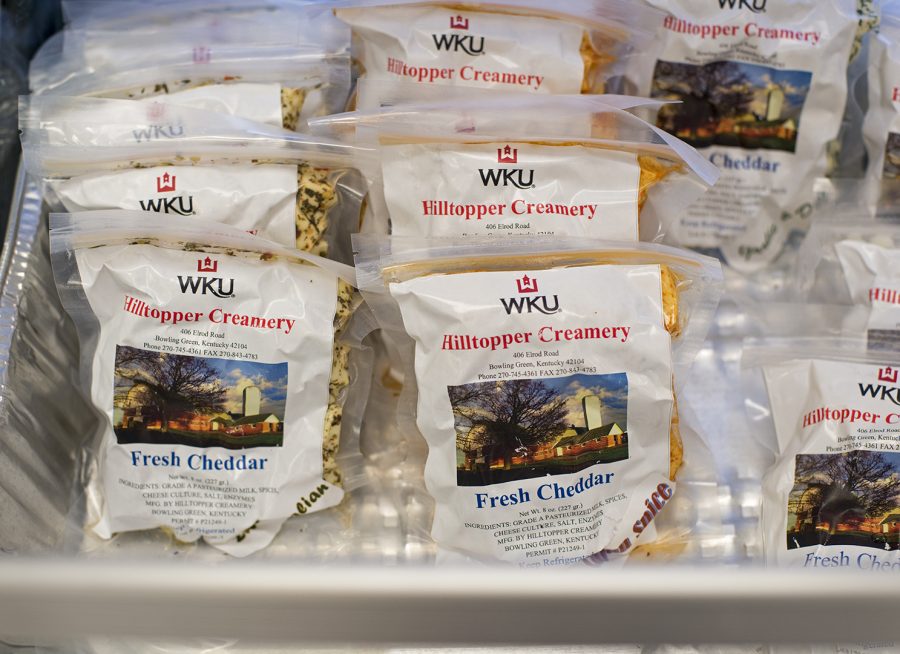 Packaged cheese made in Western Kentucky University’s creamery is stored in a small refrigerator in the “cheese-room” where all of Hilltop Creamery’s cheese gets made. The Hilltop Creamery is located in the Charles L. Taylor Agriculture Center building on WKU’s Agriculture farm. Gary Beu was hired and started the first of January to help get the Creamery up and running. “Everything’s gone really really well…dairy inspectors have been great, they’re happy with what we’re doing and how we’re doing it.”

The Hilltopper Creamery, tucked away on WKU’s farm off Nashville Road, celebrated its first anniversary of becoming an approved cheese-making plant, making their first batch of cheese with students April 19.

The plant is operated by Gary Beu, who had formerly owned a cheese plant for 12 years and is also an artisan cheesemaker. He was hired at WKU to start the creamery. He said the cheese-making process starts off as a science and becomes an art.

Beu begins his Wednesdays, or cheese-making days, at 6 a.m. for the extensive process. Students assist him with nearly every part.

“Some come in thinking this would be an easy course,” Beu said. “They find out it’s not.”

Their cheese is pressed into 20-pound blocks, but it isn’t ready to be packaged at that point. Beu explained that, depending on the type, cheeses may need to age anywhere between 30 days or even a year. The oldest cheese at the plant was made May of last year.

The creamery also packages the cheese and prints its own labels.

The type of cheese Beu and his students make each Wednesday depends on the inventory. The plant produces about seven types of cheese. Beu said the best sellers are pepper jack and cracked black pepper cheddar.

The cheese is sold both online and on location at the WKU farm. Each Saturday, Beu said he sells the cheese at the SoKY Marketplace in downtown Bowling Green. The marketplace is open from 8 a.m. to 1 p.m. every Saturday and Tuesday.

Most of the students who work for the creamery are agriculture majors. Walton senior Ben Benton said he was interested in cheese making because it involved taking a raw product and selling it to the public.

Benton said he has worked for the creamery since last May. His responsibilities include pumping milk and hauling it to the creamery. He said one of the most rewarding things about it is learning something new each time.

“Working at Hilltopper Creamery has taught me a great deal of responsibility by having to get up early on cheese making days before most college students think about getting up,” Benton said in an email.

Rachel Bunner, the creamery’s administrative assistant and an exercise science major, said she began working at the creamery when it was first opening and needed extra help. She said that the job taught her that she can enjoy her work.

“I like working there because not a day goes by where I doubt that I’m appreciated for doing the work I do there,” Bunner said in an email.

Beu said he enjoys the process of cheese-making because it’s constantly changing. He said he enjoyed the scientific aspect of it and how he could use different techniques to improve things that weren’t working.

Above all, he said, he enjoys working with the students.

To celebrate its one-year anniversary, the creamery is offering a 15 percent discount on all of its products. The offer lasts through April 30. The discount can be applied to online orders with the code 1YGGKW9P4P2V.