SB 151: How our pension bill ended up in the sewers 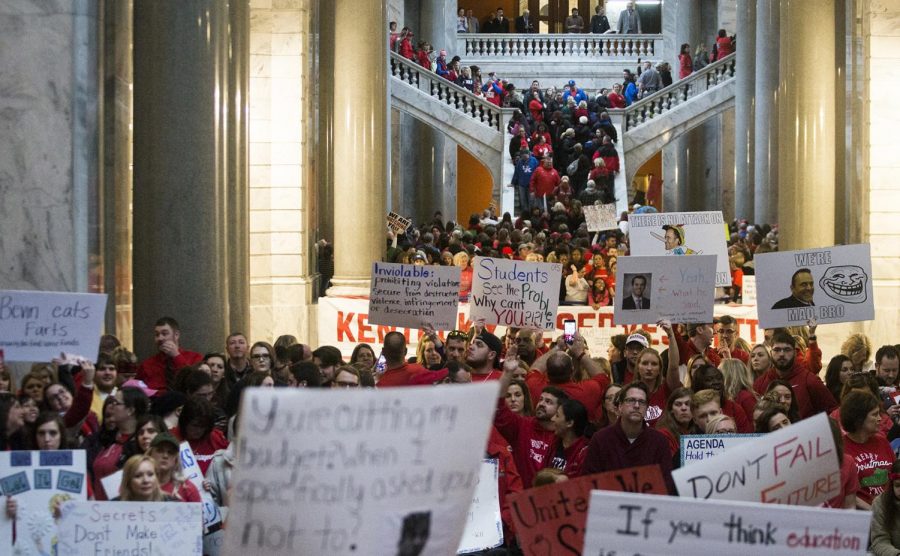 Teachers gathered on April 2 at the Kentucky State Capital Building in Frankfurt, Ky. to protest a new pension bill.

The Issue: Late this past Thursday, amidst shouts of protest from teachers across the state, lawmakers were able to approve a hastily thrown together pension bill on the tail-end of a sewage bill, SB 151. While this piece of legislation has yet to be passed into law, the pension system now may take even longer to become fully funded as the bill is set to take an extra six years and $5 billion to pay off the current debt.

Our Stance: SB 151 is an insult to our teachers who are getting ripped off in this awful deal. In addition to not guaranteeing teachers their pensions for when they retire, the bill does very little to really make a dent in our state’s debt. On top of that, the bill was approved at the time without any actuarial analysis or input from teachers who will be the ones heavily affected if the law is to be put in place. It’s as if state lawmakers approved this bill just to say they got something done.

Two weeks ago, the College Heights Herald printed an editorial on the negative consequences of Senate Bill 1: Republican lawmakers’ first attempt to fully fund the ailing pension system. Little did we know that an even uglier bill would be rearing its head soon within the pages of a sewage bill. We hope the irony of putting his proposed saving grace legislation within the pages of a bill meant for waste and toxicity was not lost on Gov. Matt Bevin.

Speaking of our state government, it’s clear that none of our elected officials took our advice from the last editorial as no teachers, or an actuary for that matter, were asked for input on the specifics of SB 151. As expected, what followed was a disaster.

In an interview with the Lexington Herald-Leader, state Rep. John “Bam” Carney (R-Campbellsville) stated, “The proposed cuts to teachers’ cost-of-living adjustments in Senate Bill 1 made up most of the $3.2 billion that legislation was projected to save. Without the COLA cuts…the latest pension plan will save around $300 million over the next 30 years…”

So if the new bill doesn’t get us any closer to funding the pension system, but still imposes negative consequences on our state’s teachers, why enact this legislation at all?

Carney proceeds to explain in the same article that SB 151 can still help the state by solidifying it’s credit rating and reducing it’s pension liability after 30 years.

In reality, this bill hurts teachers by forcing them into a retirement plan with much less security than the plan they’re currently on. Since teachers in Kentucky don’t draw money from Social Security once they retire, they rely on the promise made by the state government that they can live off of a pension once their contribution to the workforce is complete. So now there’s a greater chance current teachers are putting money into a system that won’t take care of them when they need it.

Then what’s the incentive for being a teacher in a state where they can take away retirement benefits like it’s nothing and the governor constantly disrespects your profession?

The hard truth is that many good teachers in this state will see what’s going on in Frankfort and decide they’ll be much better taken care of elsewhere, and sadly they’d be right. With every good teacher that decides to leave, there’s a number of students who now won’t be able to reach their full potential. This limits the potential for innovation in business, technology and the arts within state lines, thereby hurting the economy in the long run.

If Kentucky is one big casino, betting against education is a rookie mistake.

Years from now if this legislation proceeds to pass, current lawmakers will look back on their decision to just pass something for the heck of it and think: was it worth it?