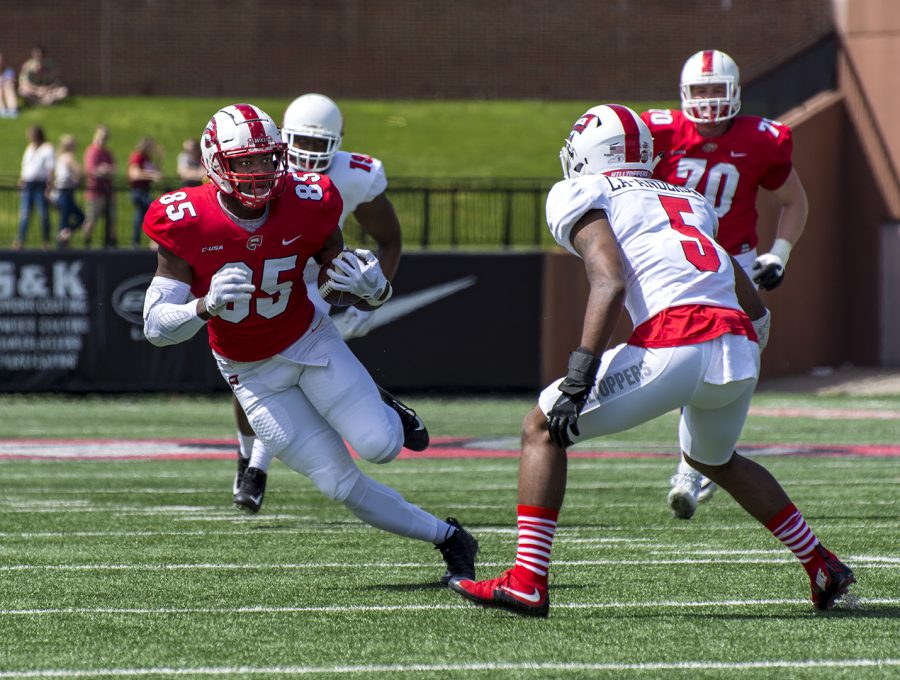 WKU football held its annual spring game Saturday, as the Red team defeated the White team 24-14 in an offense-heavy first half.

On a beautiful day for football, head coach Mike Sanford said he was happy with the results from his second spring game at WKU.

“Obviously, it wasn’t a traditional spring game, tackle, playing with two true teams, but the work we wanted to get out of it we absolutely got out of it,” Sanford said. “We got 92 plays in the scrimmage. We wanted to make sure every single person on our roster got a rep today, and that was good to see. Overall, I’m pleased with what I saw.”

Senior quarterback Drew Eckels started for the Red team and led a balanced attack throughout. The quarterbacks combined for almost 100 yards on the ground. The two squads combined for over 500 yards of offense in the first half.

Eckels said he feels like the offense is coming together nicely and is on the verge of a breakthrough.

“As a senior, you have to lead the team in the right ways, and I feel like we did that today, all the seniors came around,” Eckels said. “I feel like the offense is coming to its final piece. We’ve just got camp, a few fundamentals, and then we should be good.”

A major topic of discussion going into the spring game was the running game. The Hilltoppers ranked last in the nation in rushing last season. Today, WKU totaled 237 yards on the ground in the first half and averaged 6.6 yards per carry.

While it’s still not where he wants it to be, Sanford said he definitely sees a better running team today than a year ago.

“I saw improvement in the run game,” Sanford said. “I thought that our offensive line did a good job of covering things up. It’s definitely not complete yet. It’s a work in progress, but we’re moving in the right direction.”

In the first possession, Eckels completed a 1-yard touchdown pass to rising redshirt sophomore receiver Xavier Lane to give the Red team an early 7-0 advantage. Eckels finished the drive 3 for 3 for 60 yards and the touchdown on the first drive.

Redshirt freshman running back Joshua Samuel broke through for a 26-yard gain on his first carry of the game for the Red team.

D’Andre Ferby finished off the Red team’s second drive with a 2-yard touchdown right up the middle on fourth down to give the Red team a 14-0 lead.

Shanley ripped off a 30-yard run and hit rising redshirt junior Quin Jernighan for a 25-yard completion on consecutive plays. Redshirt freshman KeShawn McClendon got the White team on the board with a 15-yard run for a touchdown.

Running back Marquez Trigg starred on the Red team’s third drive, breaking off a 36-yard run and a first-down reception. Samuel eventually punched it in from a yard out to put the Red team up 21-7.

Shanley continued his success on the ground for the White team, picking up multiple first downs with his legs. Rising redshirt sophomore defensive lineman Jeremy Darvin made the first big play for either defense, sacking Shanley in the second quarter.

Shanley finally made his way into the end zone with a 2-yard scamper to make the score 21-14 with the Red team still leading.

Eckels led the Red team down the field and rising redshirt senior Ryan Nuss knocked in a 44-yard field goal at the end of the half. The Red team led the white 24-14 at the half.

Rising sophomore defensive back Roger Cray forced the first turnover of the game, picking off Shanley as the White team was driving.

The team elected to forgo the fourth quarter after a scoreless third quarter.

With spring practice now officially over, WKU will hit the field again for its season opener on Aug. 31 at Wisconsin.