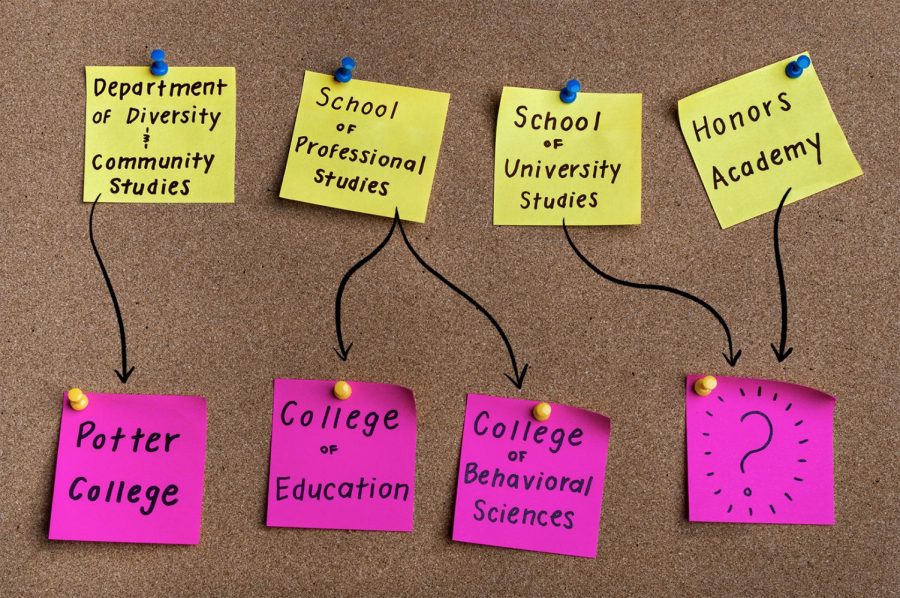 University College will be dissolved and the placement of its academic units will be reorganized, according to a faculty and staff-wide email sent by the provost April 11.

“We have been working steadily and thoughtfully to identify the best new homes– both academic and, in some cases, physical — for [University College] personnel and programs,” David Lee, provost and vice president for academic affairs, said in the April 11 email.

She said five faculty members will be moving into the math department, five into the English department, one into teacher education for literacy and one into the School of Professional Studies to teach University Experience.

The School of University Studies provided a retention center, called Student Support Programs. Hall said this retention center included programs like Summer Early Entry, which was a summer bridge program and Academic Community Engaging Students or A.C.E.S., which is the oldest living learning community on campus.

“Basically, we functioned as a student support for students who need a little extra help to be college ready,” Hall said.

Hall said the future of their programming is uncertain.

“I’m not sure about the programming that we do,” Hall said. “That’s still in question right now.”

“We didn’t know if we’d dissolve or not, but we were told that we would not dissolve,” Hall said, regarding how she thought initially that the faculty would not be split up. “That just means that you focus on student success and adjust to your new circumstances.”

Prior to Lee’s email announcing the dissolution of the School of University Studies, the school already lost three employees due to the first wave of budget cuts, as well as the tutoring center staff and the office associate.

Although the School of University Studies is dissolving after June 30, Hall said the students who were taught by the school will not be going away.

“We’re just not going to be a unit that’s together, which makes it a little bit more challenging to make sure we have a firm safety net for students that are at-risk or underprepared,” Hall said. “That’s our worry. We want to see the students be supported.”

Hall said the departments that have been receiving faculty and staff from the School of University Studies have been compassionate during the transition.

“So far, all the departments that have been receiving faculty and staff have been very understanding, very gracious, very compassionate,” Hall said. “That’s a good sign.”

Lee said in the email there is still more work to be done. He said Academic Affairs is committed to protecting tenure and promotion rights as well as abiding by any pre-existing agreements relevant to individuals.

It was announced on Feb. 26 that the Budget Council recommended eliminating University College as a cost-saving measure. The elimination will go into effect on July 1 of this year.