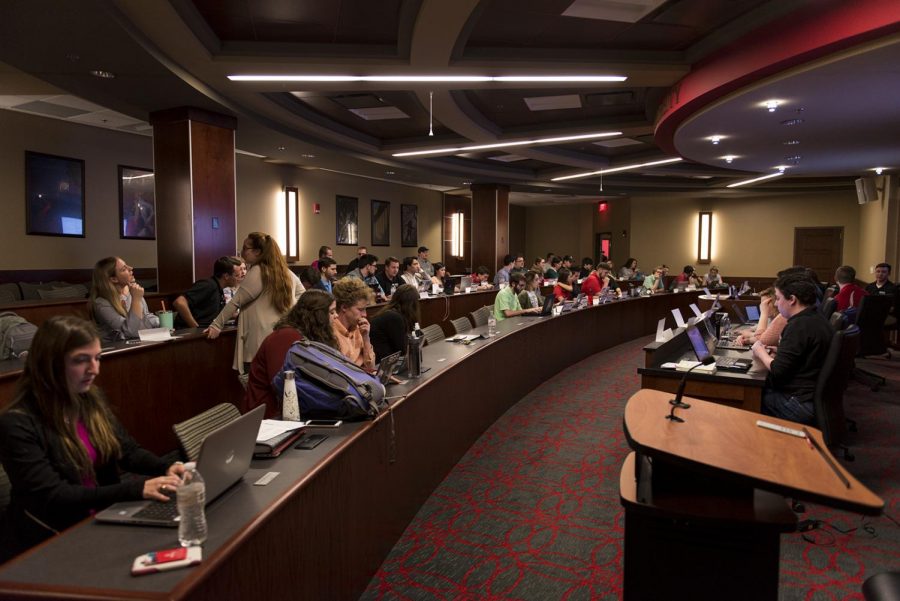 The SGA meets on Feb. 27 in the SGA chambers in Downing Student Union. They discussed the recent budget cuts and ideas on what that would consist of in the future as well as the dining contract with Aramark.

Conner Hounshell, the first candidate for SGA president, is a rising junior at WKU and the current SGA chief of staff. He has served on three university committees, including a strategic planning committee and a committee to promote inclusivity at WKU.

Hounshell said his first goal as president includes ensuring that “budget shortfalls do not rest on the back of students” by protecting programs and services which are important to students. Another goal is improving student wellness by increasing access to vital resources, including mental health counseling, according to the SGA Candidate Packet for spring 2018.

“He plans to make SGA representative of the whole campus and create a more inclusive community for all Hilltoppers,” according to Hounshell’s bio in the campaign packet.

The second presidential candidate is Stephen Mayer, who is a rising junior from Louisville. Mayer is a member of Sigma Phi Epsilon and TriBeta. He was elected as a senator in the fall of 2016, and after his first semester in SGA, he was appointed chair of academic affairs.

His platform includes improving retention, focused outreach and accessibility, according to the campaign packet.

“Through focused outreach, SGA will not only gain a more diverse senate, but it will also help the university’s retention rates through increased involvement,” according to Mayer’s bio in the campaign packet.

The third candidate running for president is Bowling Green sophomore Kenan Mujkanovic. Mujkanovic is currently a senator, and the son of Bosnian refugees, according to the campaign packet.

“Growing up in poverty, Kenan made it his mission to help youth in our local community who were going through a similar battle, leading him to build a nonprofit, write a book, and start a business,” according to Mujkanovic’s bio in the campaign packet.

Mujkanovic’s goals as president are to “reclaim respect and awareness for student voices” and to “steady the hand that reaches for the money in students’ pockets,” according to the campaign packet