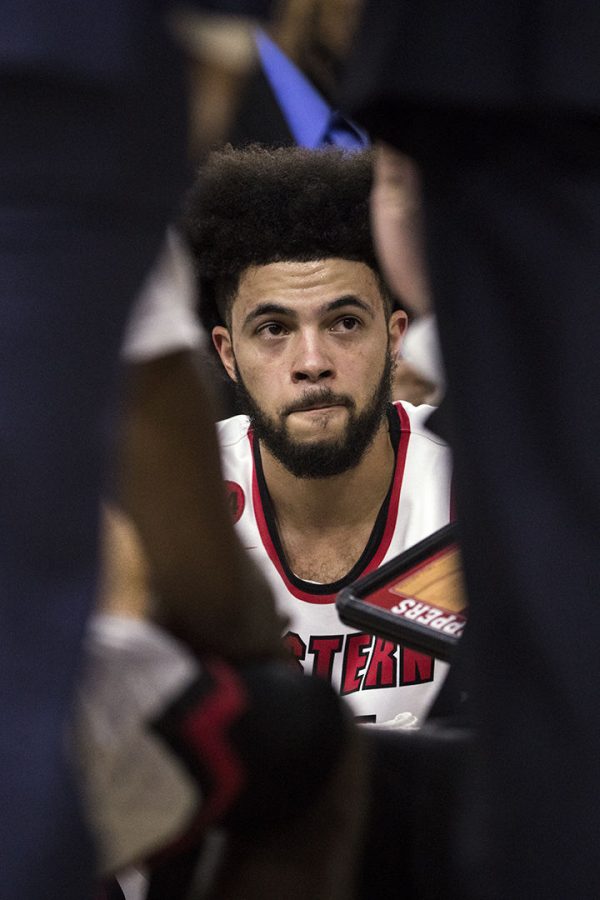 WKU Guard Darius Thompson (15) listens to head coach Rick Stansbury during the Hilltoppers 98-70 win in their first game of the Conference USA tournament against University of Alabama at Birmingham on March 8 at The Star in Frisco, Tx.

WKU men’s basketball will have some big senior shoes to fill.

Graduate transfers Dwight Coleby and Darius Thompson joined the Hilltoppers prior to the season after stints at multiple Power 5 schools. Neither were very productive in their three previous seasons at their respective schools, so WKU fans didn’t know what they were getting. It was the second consecutive season that head coach Rick Stansbury brought in multiple graduate transfers, and, in year number one the Hilltoppers won just 15 games.

This year, Coleby and Thompson helped lead WKU to 27 total wins. Thompson started all 38 games and broke the Hilltopper record for minutes played in a season (1,354) while also averaging 13.6 points per game. Coleby started all but one game and averaged 11.1 PPG and eight rebounds per game after averaging just 1.7 PPG last season at University of Kansas.

“I told you all one thing before the season, Dwight would average more than 1.7 points per game,” Stansbury said. “I think he surpassed all of our expectations. The one thing I knew we were getting was a quality person. When you’re trying to mix a whole new team together, you better have good ingredients, ingredients means good people. Dwight and Darius both fit that. Darius came from Virginia and averaged six points per game, how good has he been? They both fit well.”

While Coleby and Thompson were great, there’s no doubt that senior forward Justin Johnson will be the most memorable senior leaving the program. Johnson led WKU with 15.7 PPG and 9.4 RPG (first in C-USA) while also starting all 38 games. As far as career stats ago, the four-year starter finished top 10 in program history in scoring, rebounding, field goals and minutes played. Johnson has definitely had his ups and downs during his four years as a Hilltopper. Former WKU head Coach Ray Harper, the coach who recruited Johnson to WKU, resigned in March 2016, not long after three of Johnson’s were teammates were dismissed from the program. Through all the adversity the WKU basketball program has faced over the past four years, Johnson has been the lone consistent piece. That quickly made him the face of the program.

“If I had the chance to come here again and go through the same thing, I would do it over again,” Johnson said. “It’s been nothing but good to me, even with the ups and downs. I’ve loved every minute of it. I wish I had redid this year and had another year with the same group of guys in that locker room. I’ve made best friends for a lifetime in that locker room this year, the fun we’ve had and the memories we made. Like I said, you wish you had one more go-around with those guys.”

Although you’ll never see Johnson suit up again in a Hilltopper uniform, it probably won’t be the last time you see him in Diddle Arena.

“In years to come, I still want to be involved with this program when I’m back in town and everything,” Johnson said. “That was my goal when I came here. You want to leave something better than you found it, and leave an impression on it. I hope to have done that and help those young guys in that locker room along the way, whether it’s in life or basketball. You know, I hope that I’m leaving it in a better spot.”

Looking ahead, WKU can still be expected to be one of the favorites in Conference USA next season. Junior guard Lamonte Bearden and freshman guard Taveion Hollingsworth are the lone two starters returning for WKU in 2018-19.

Freshman guards Josh Anderson and Jake Ohmer, freshman forward Marek Nelson and redshirt sophomore forward Moustapha Diagne return as key contributors off the bench as well. Austin Peay transfer Jared Savage will also be eligible for the Hilltoppers next season after sitting out this season due to NCAA transfer rules. Savage led APSU to the NCAA Tournament as a true freshman, and will look to help guide WKU back to the big dance next season.